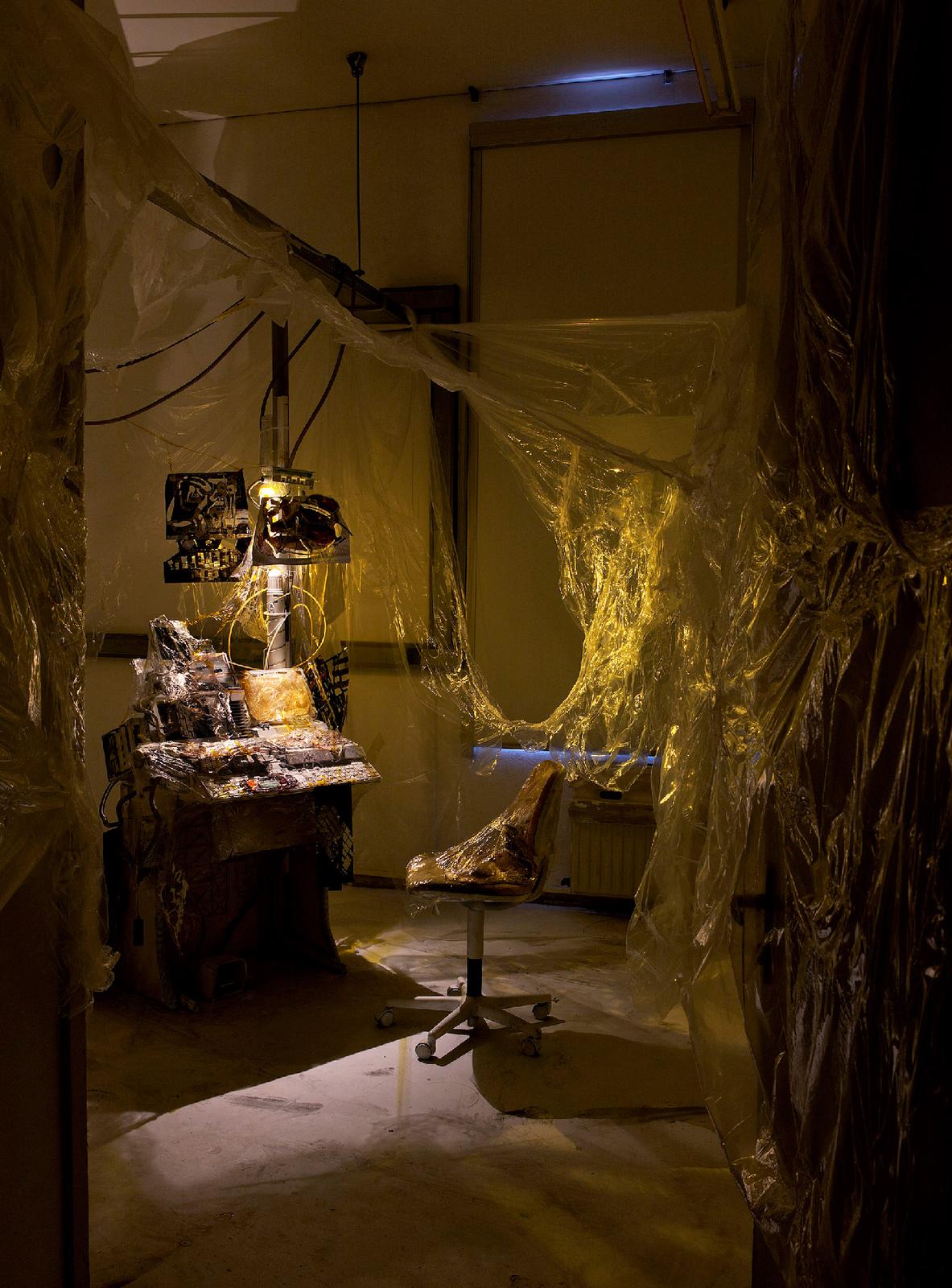 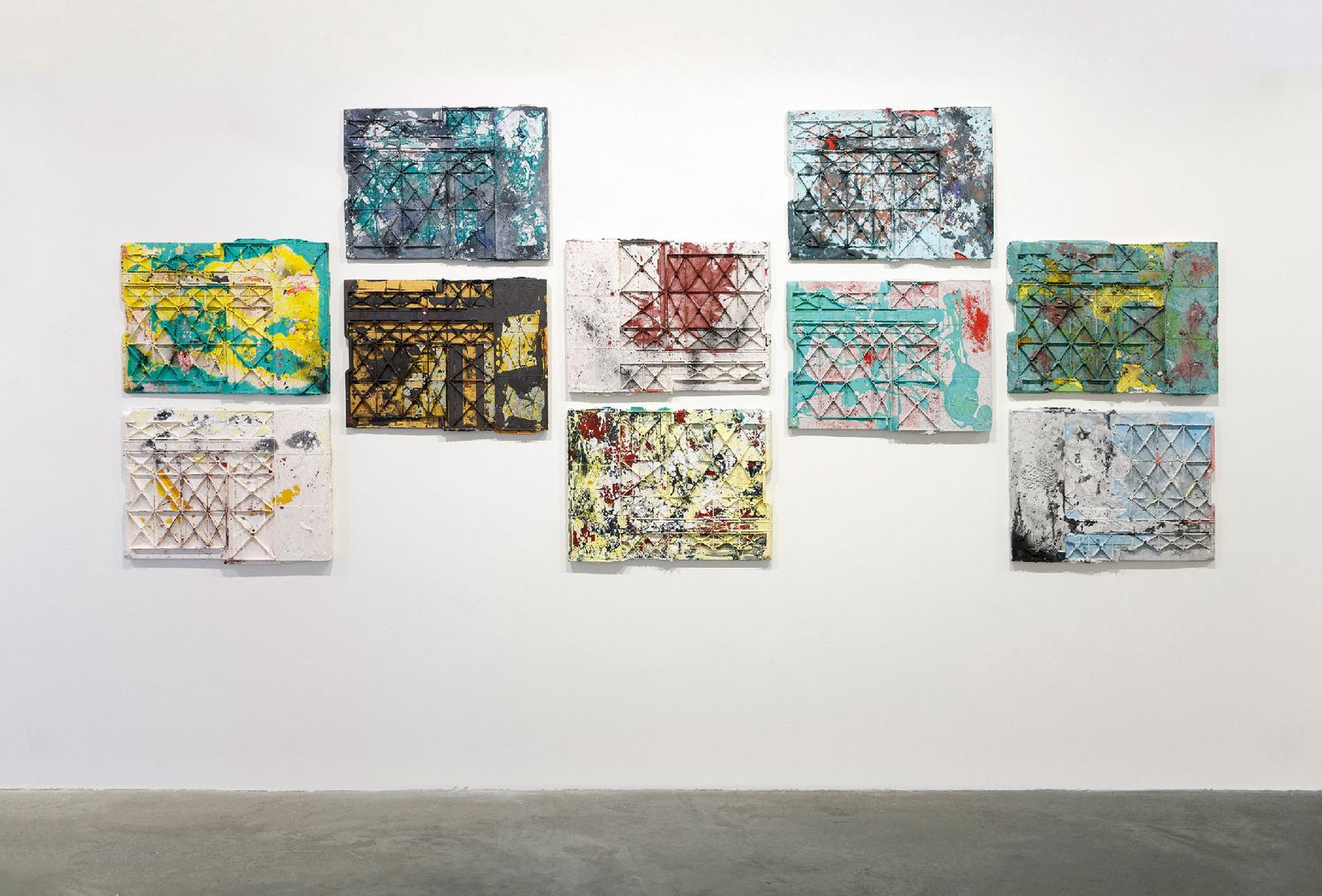 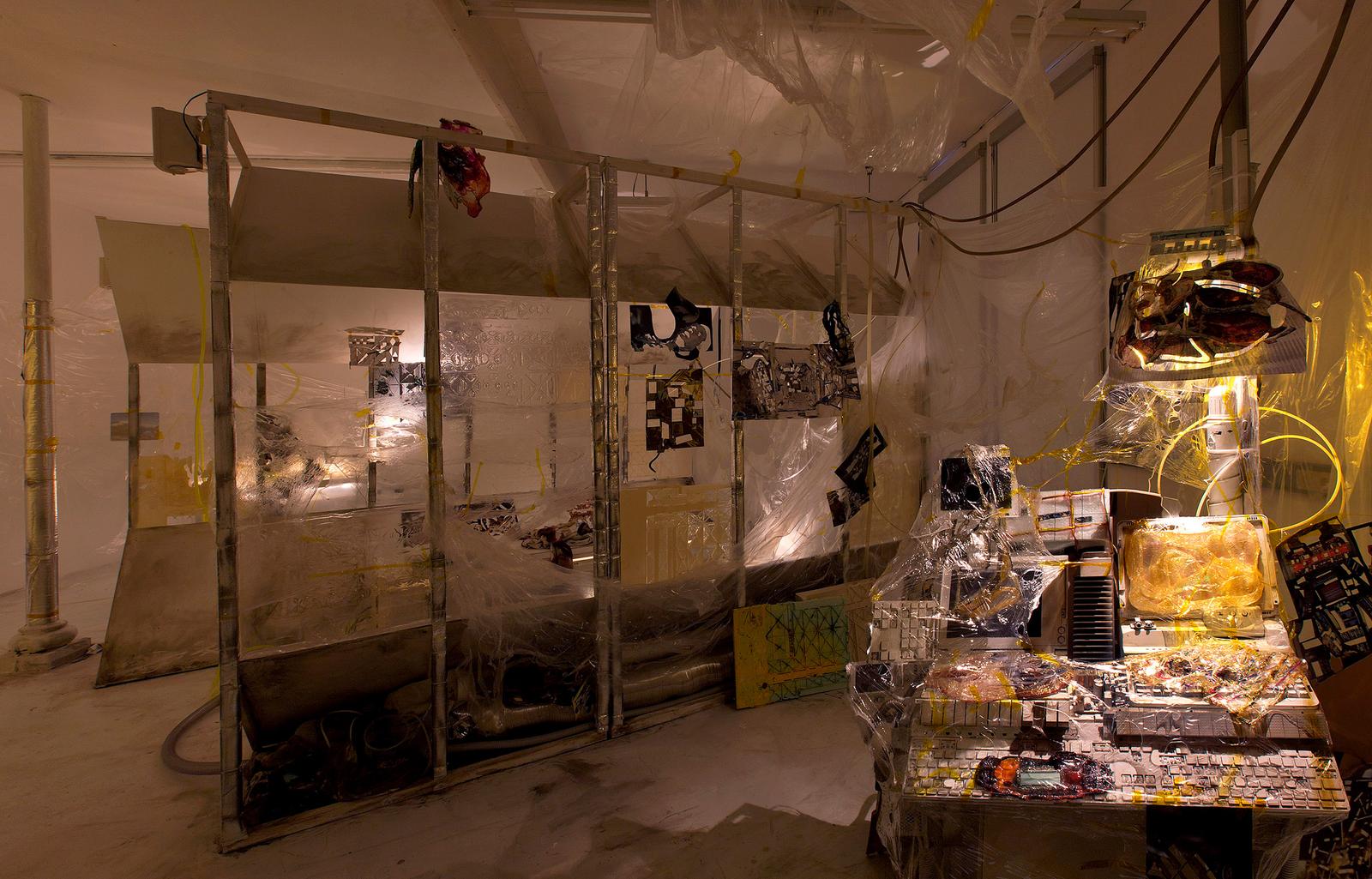 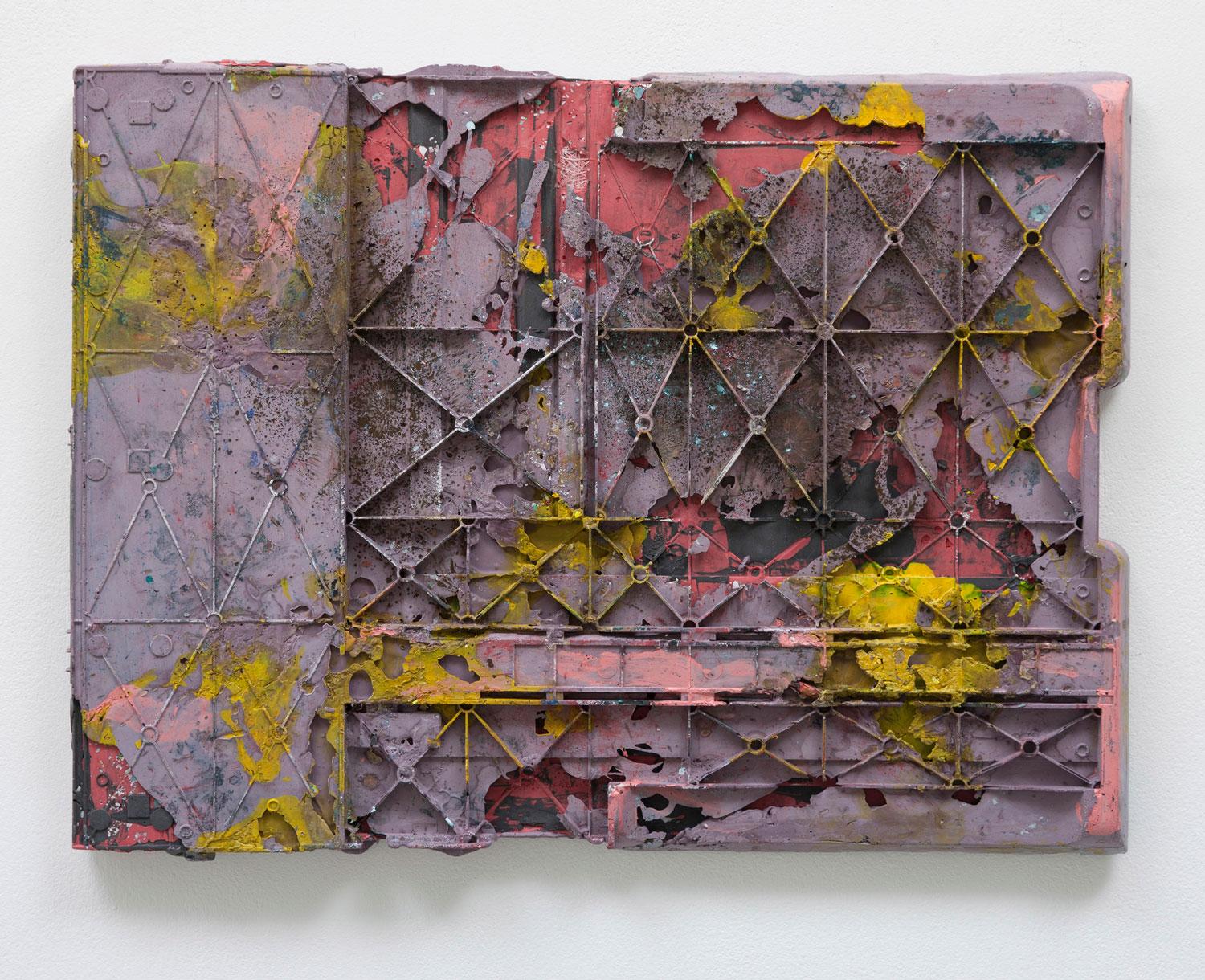 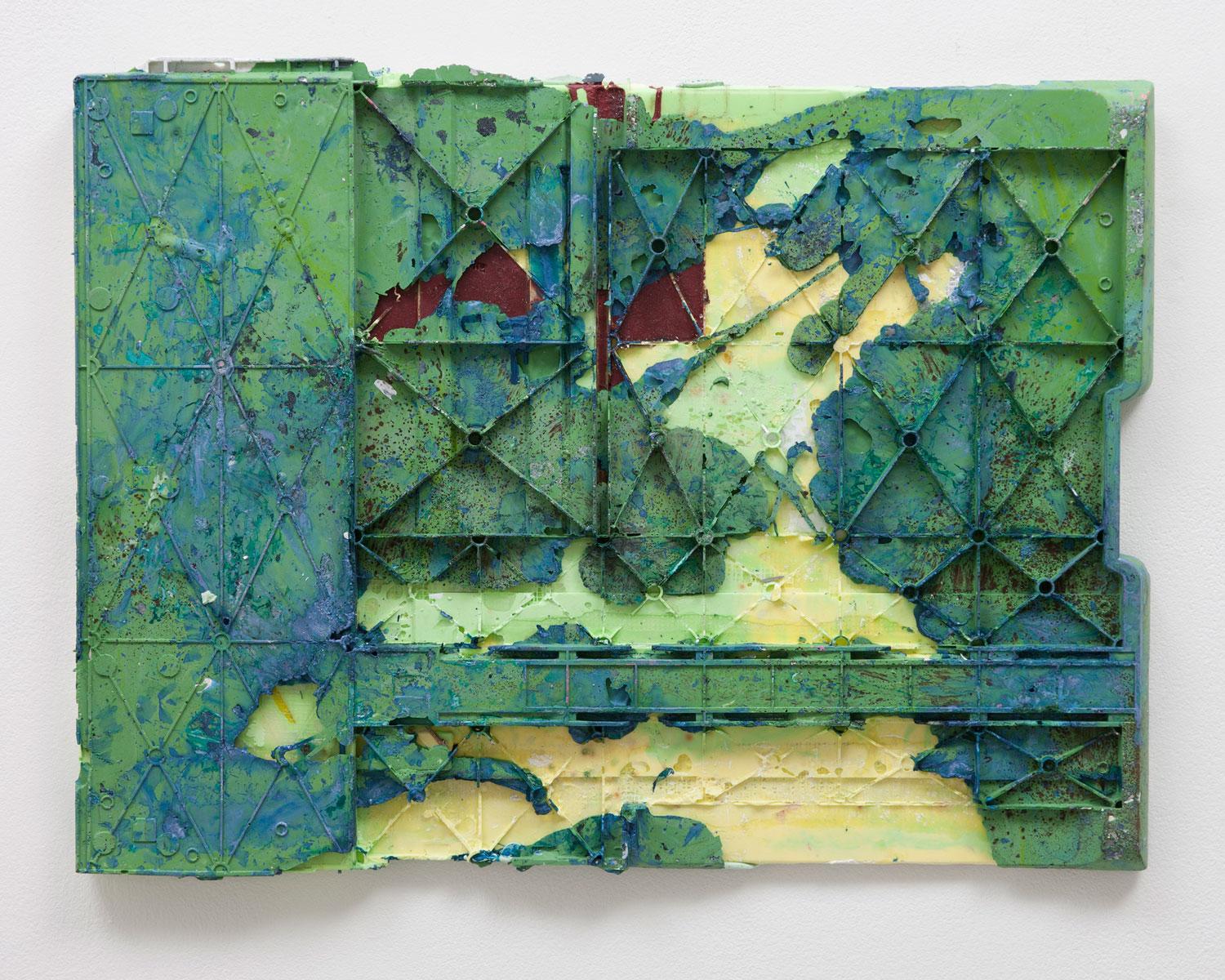 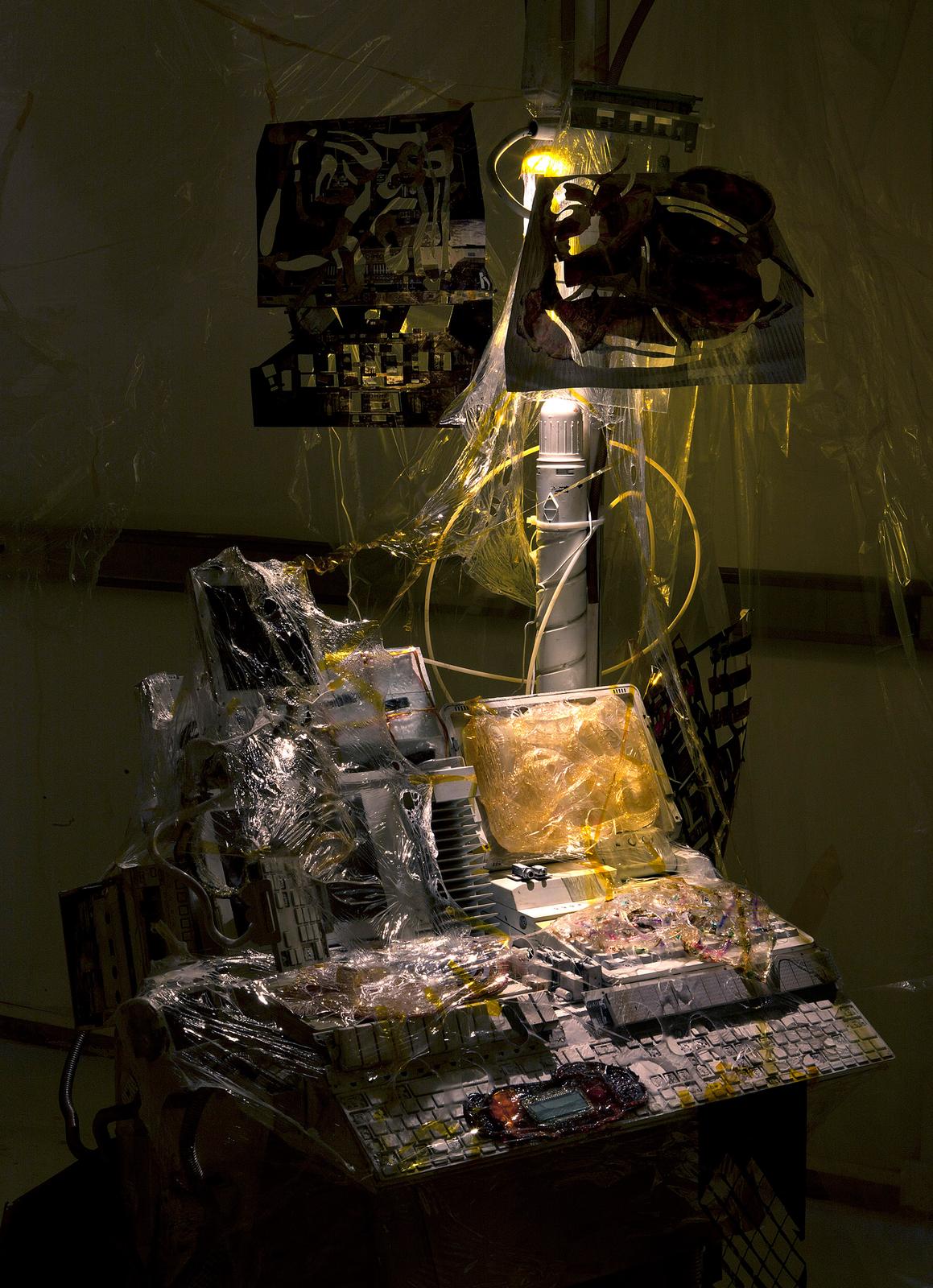 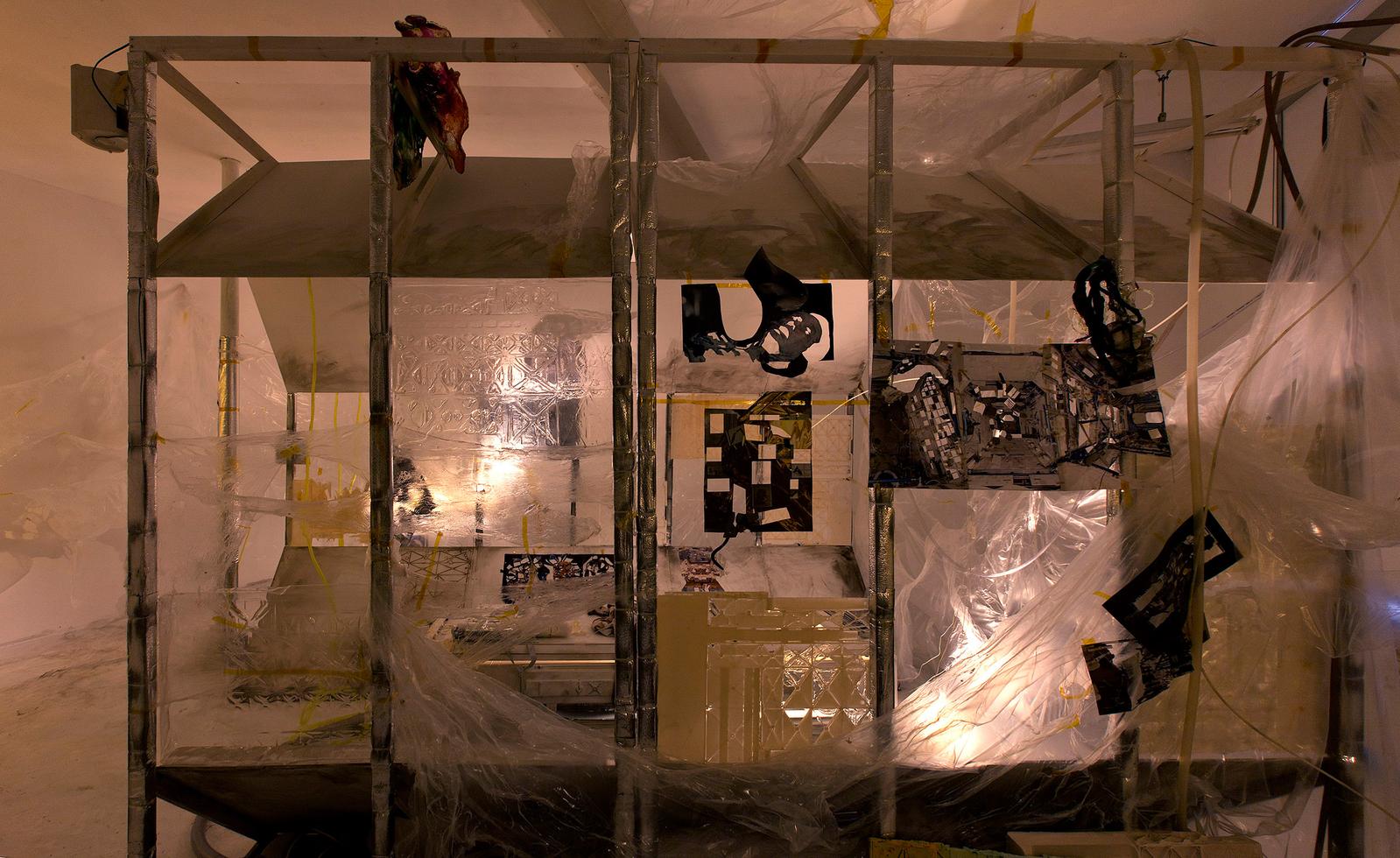 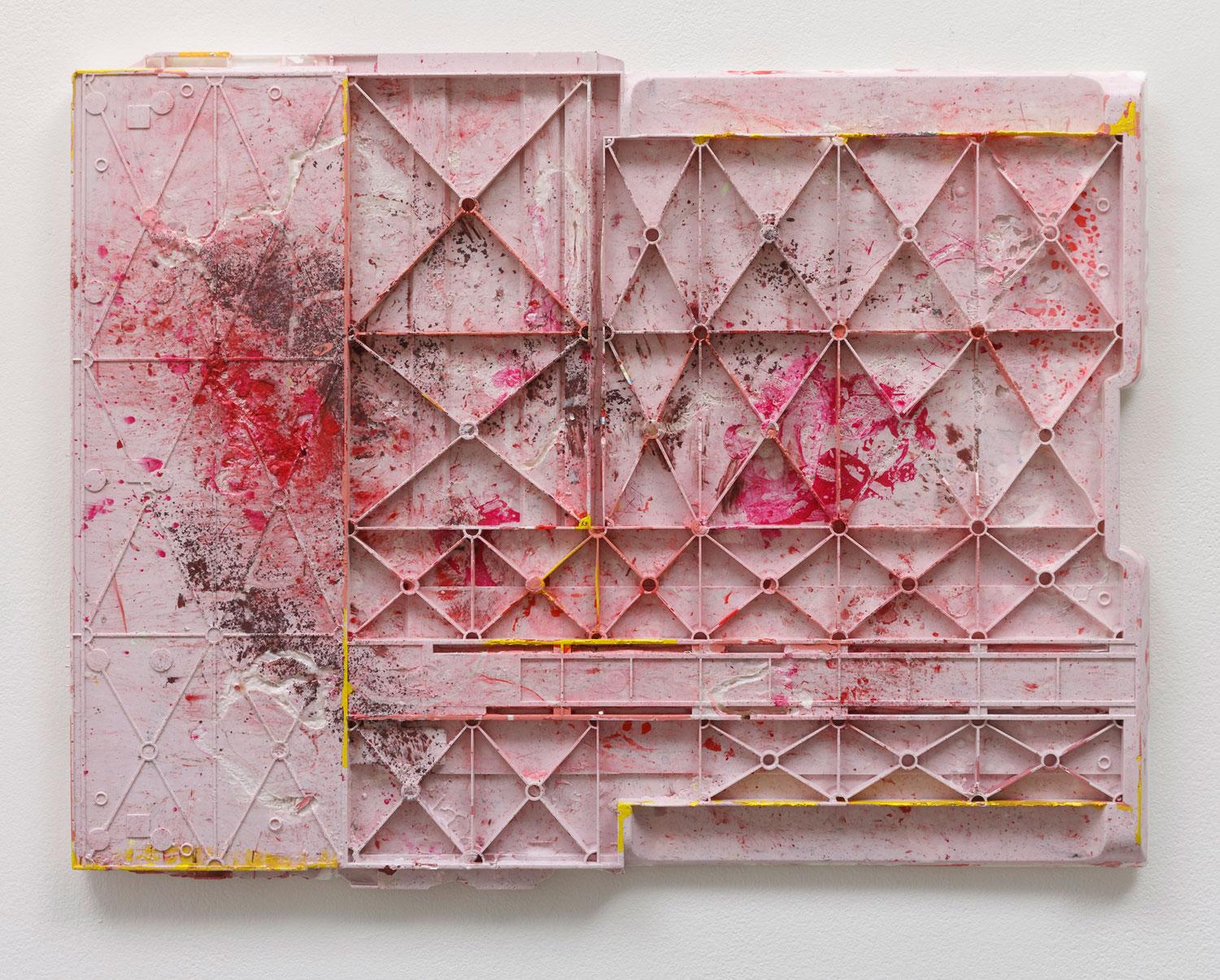 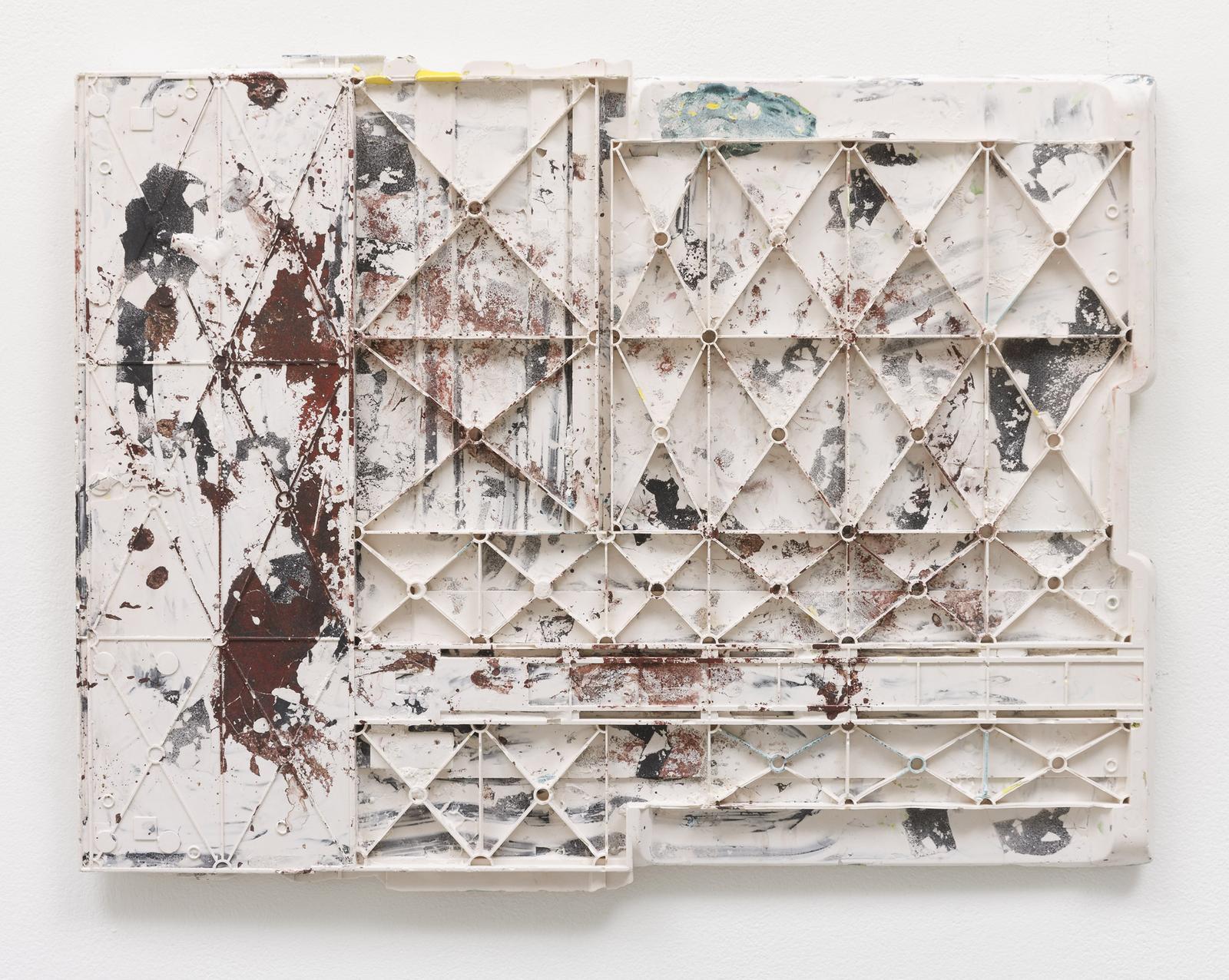 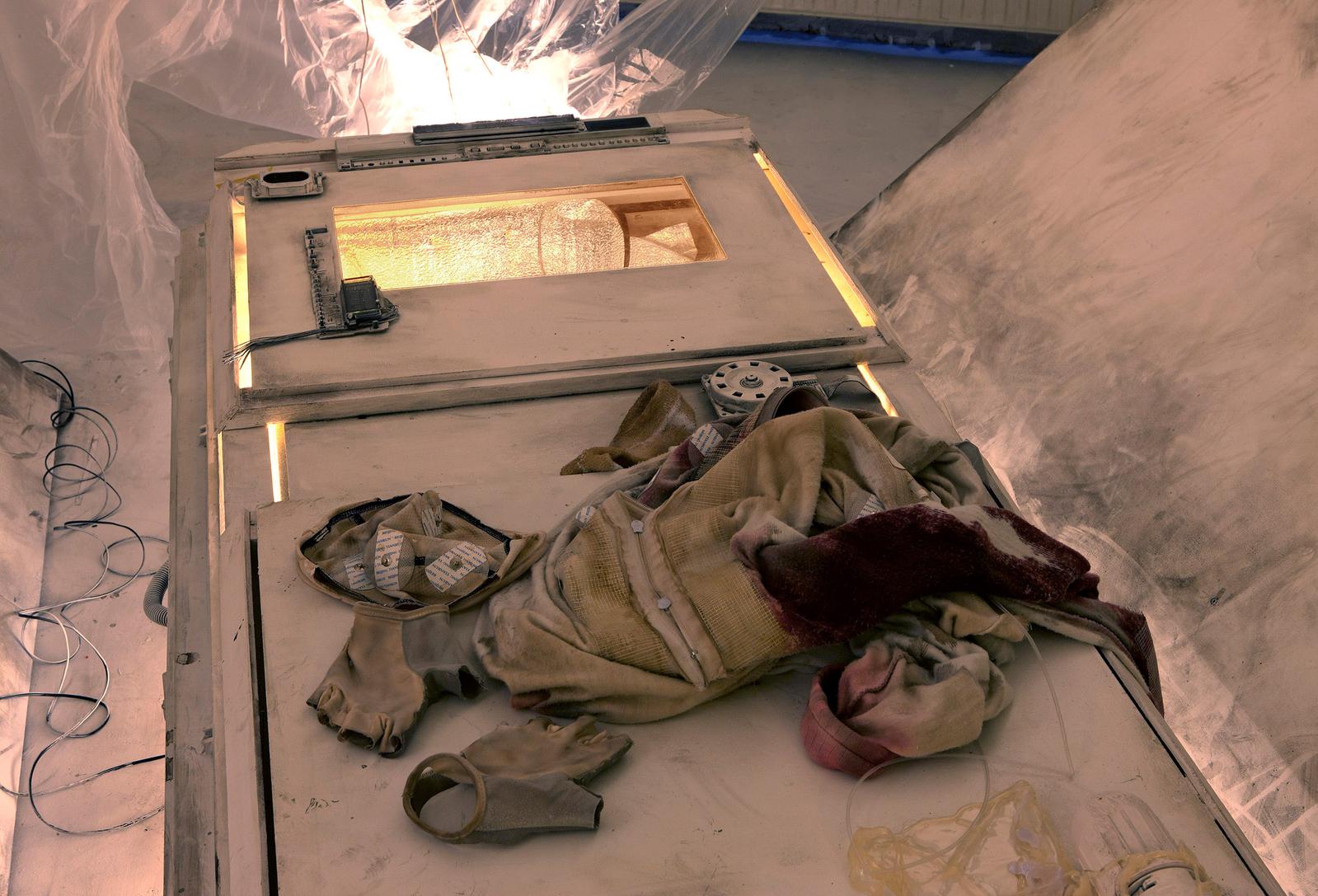 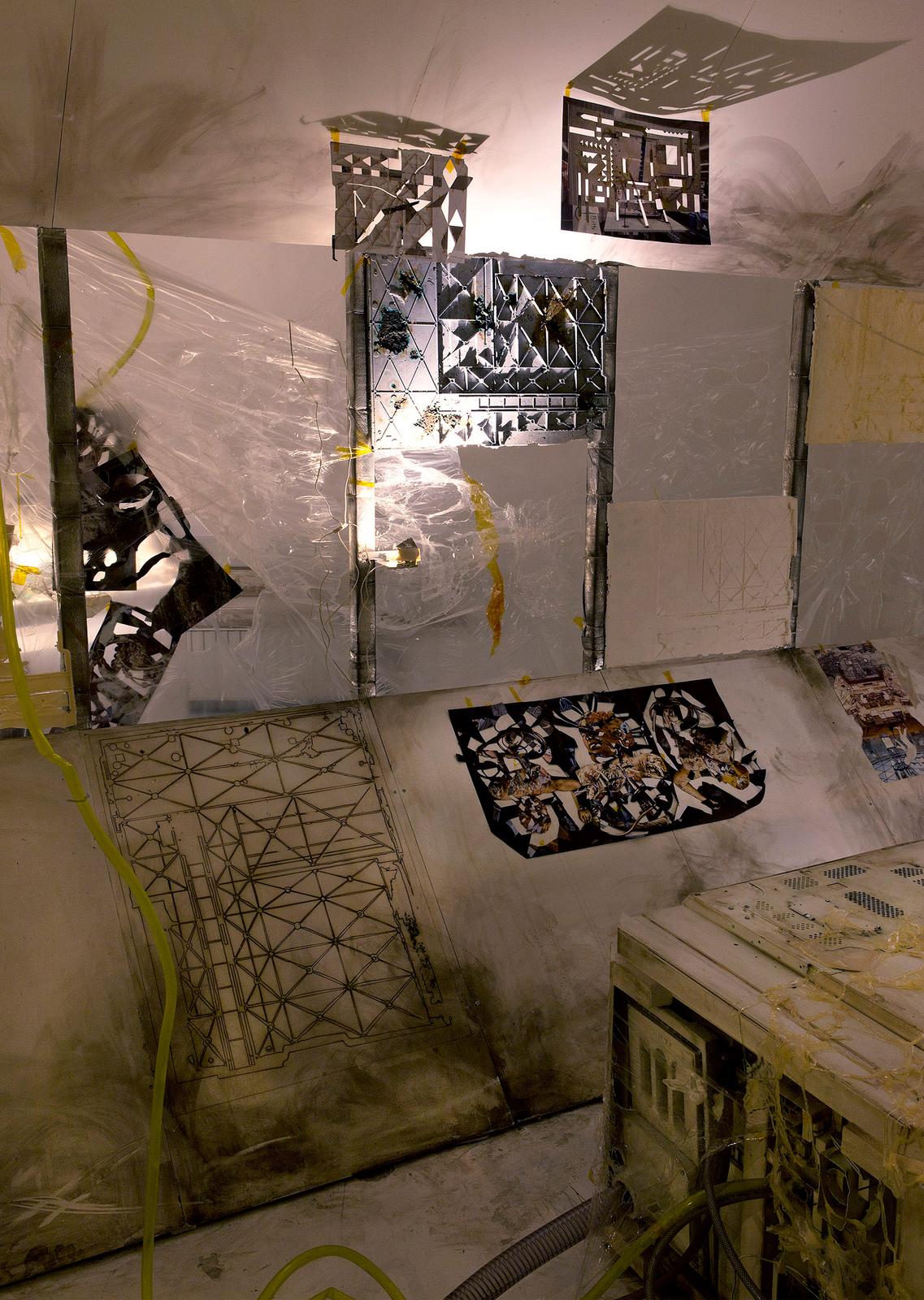 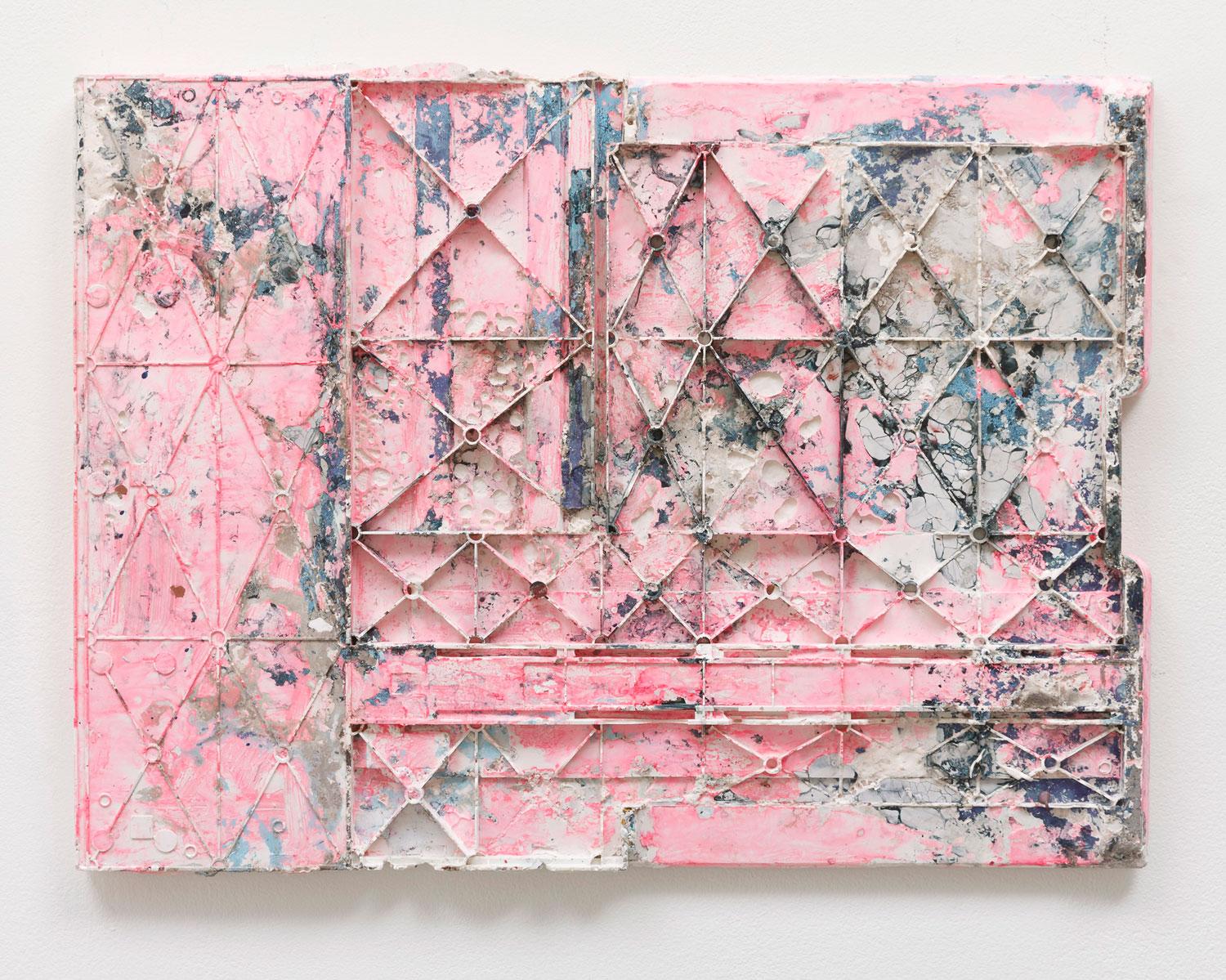 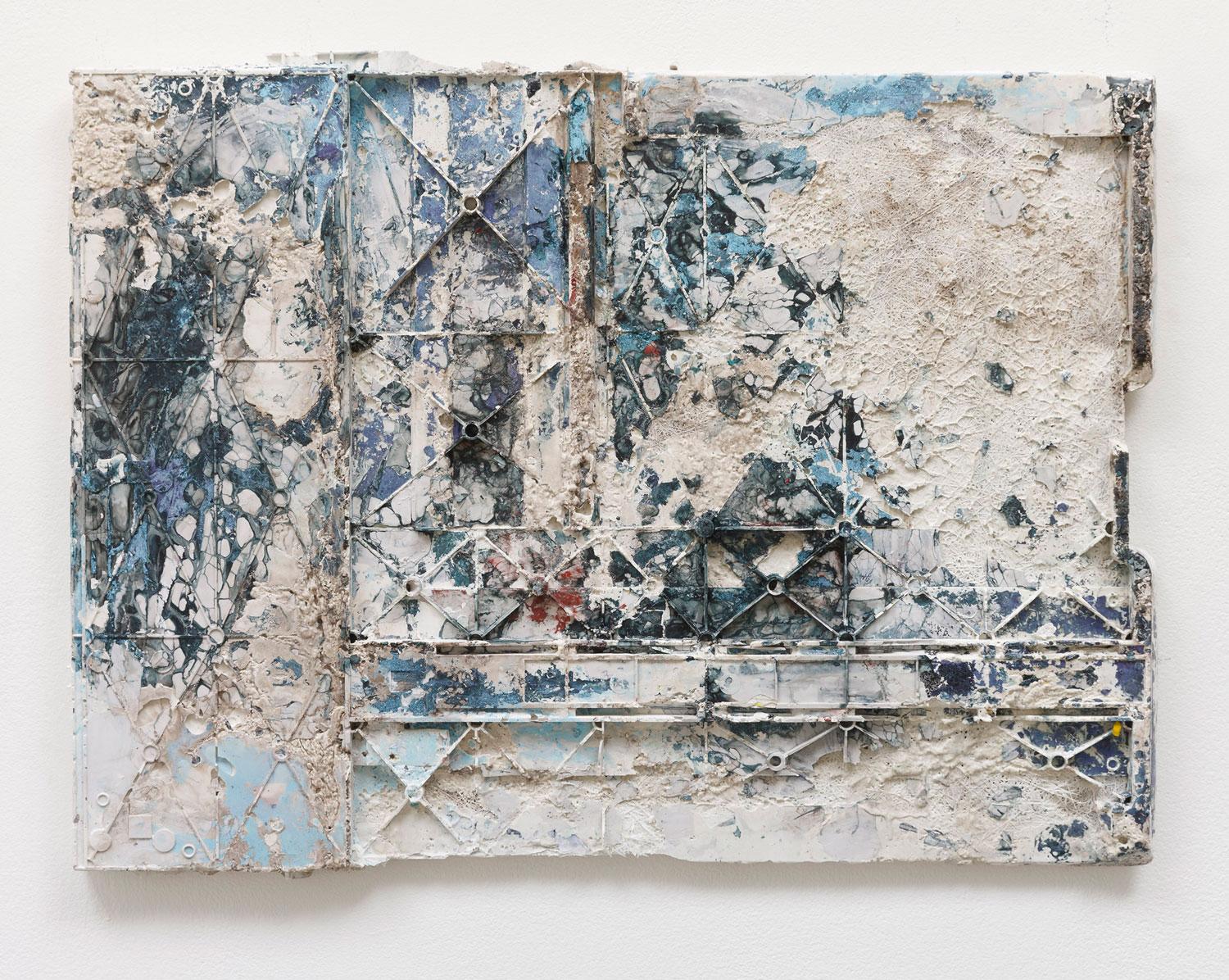 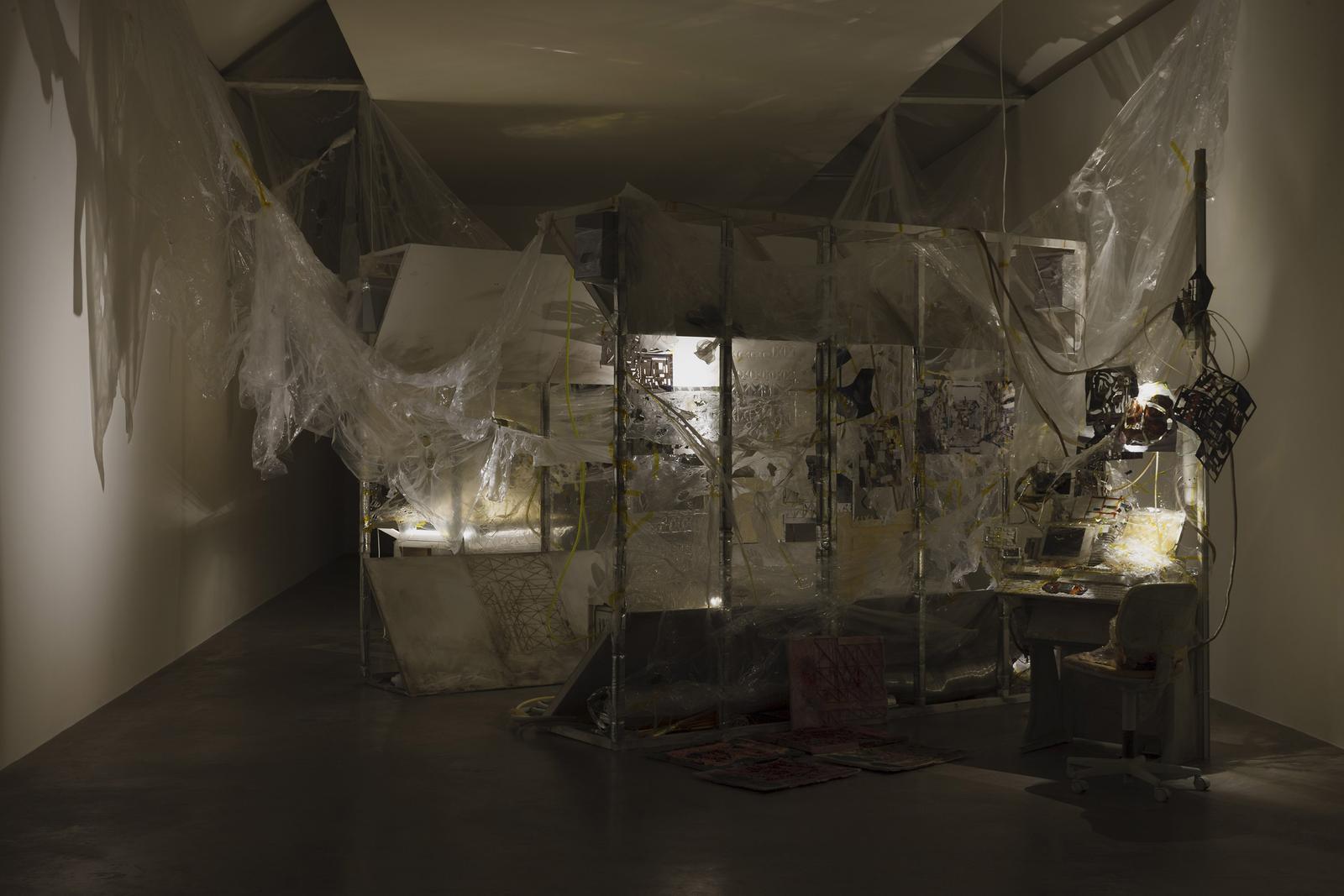 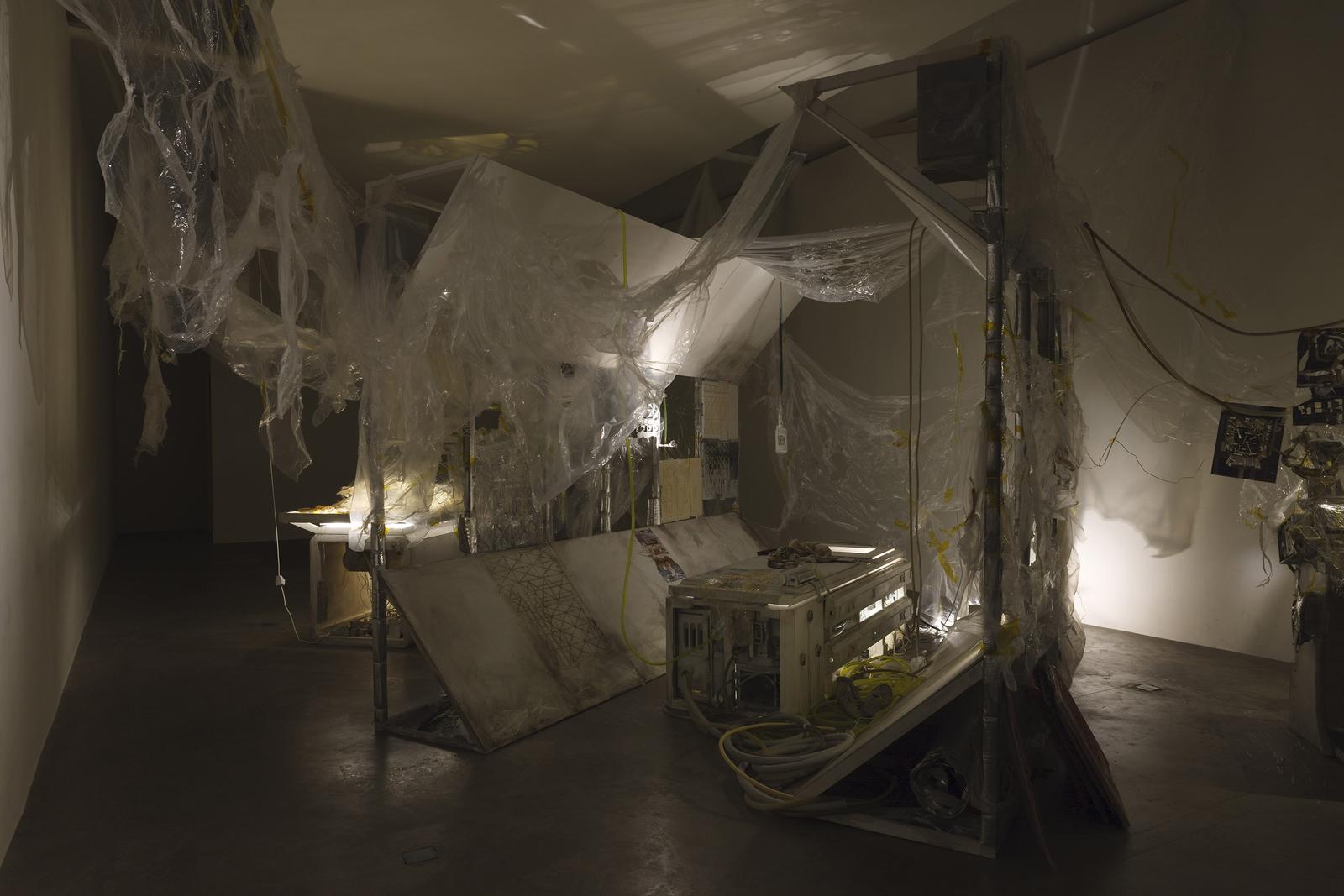 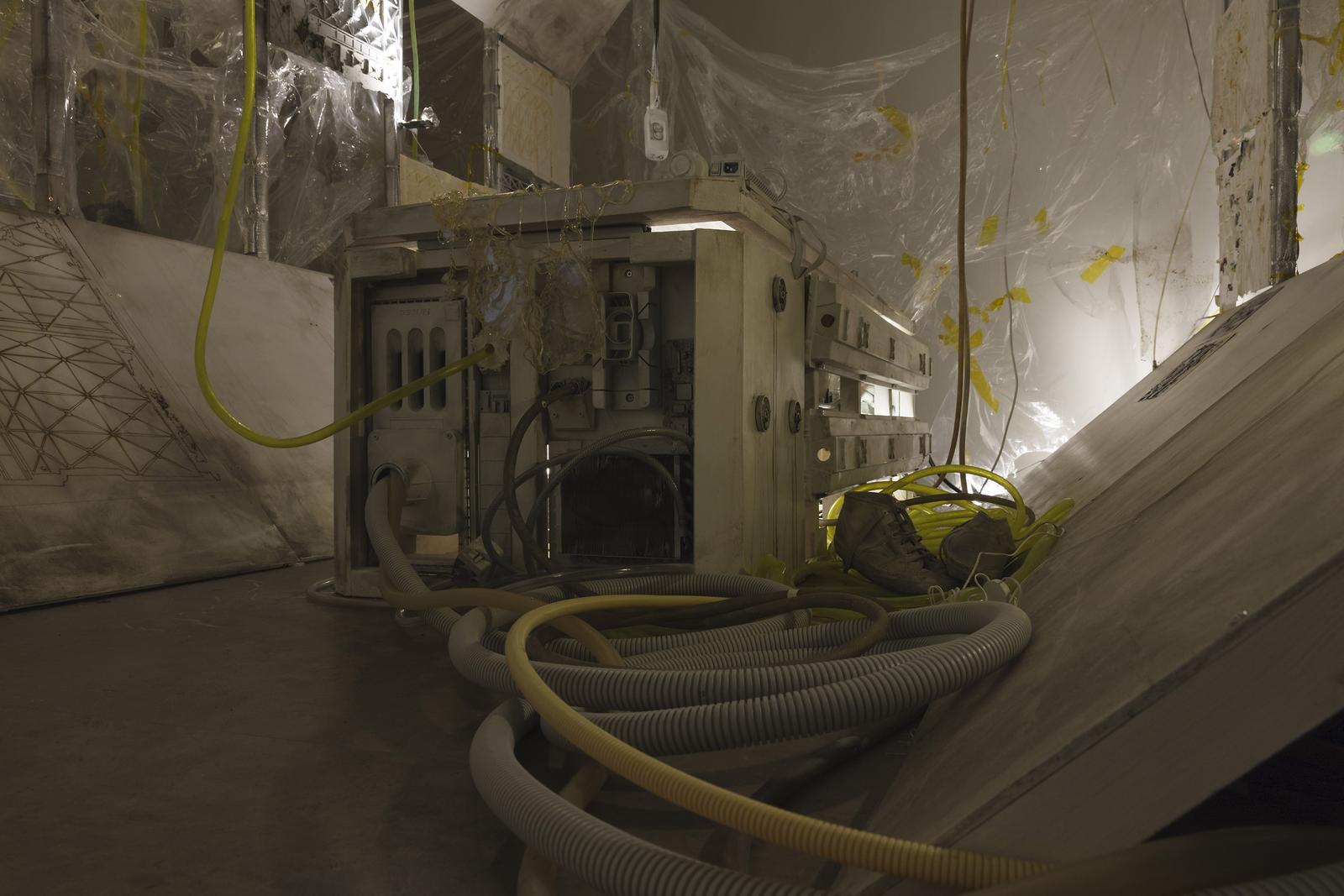 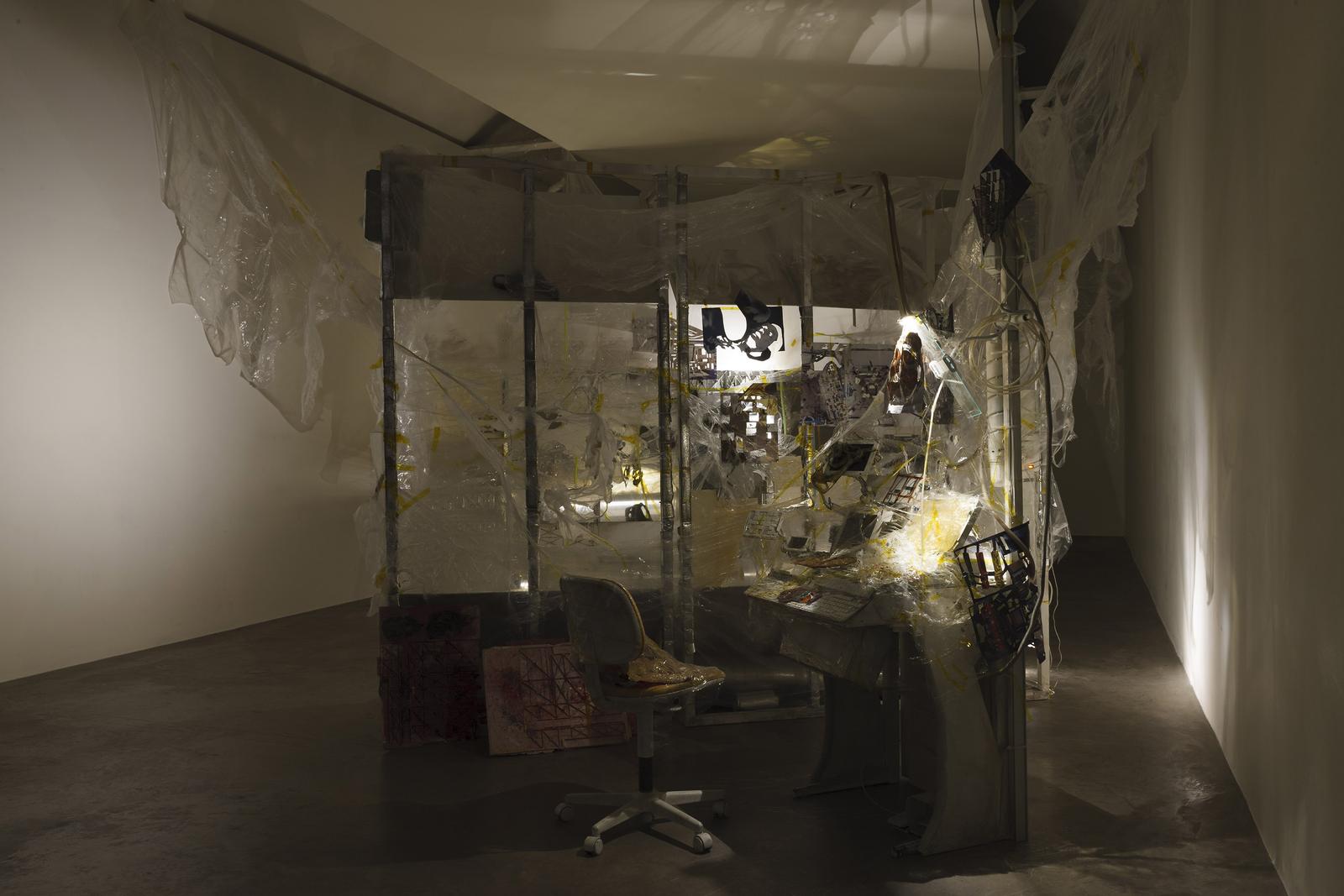 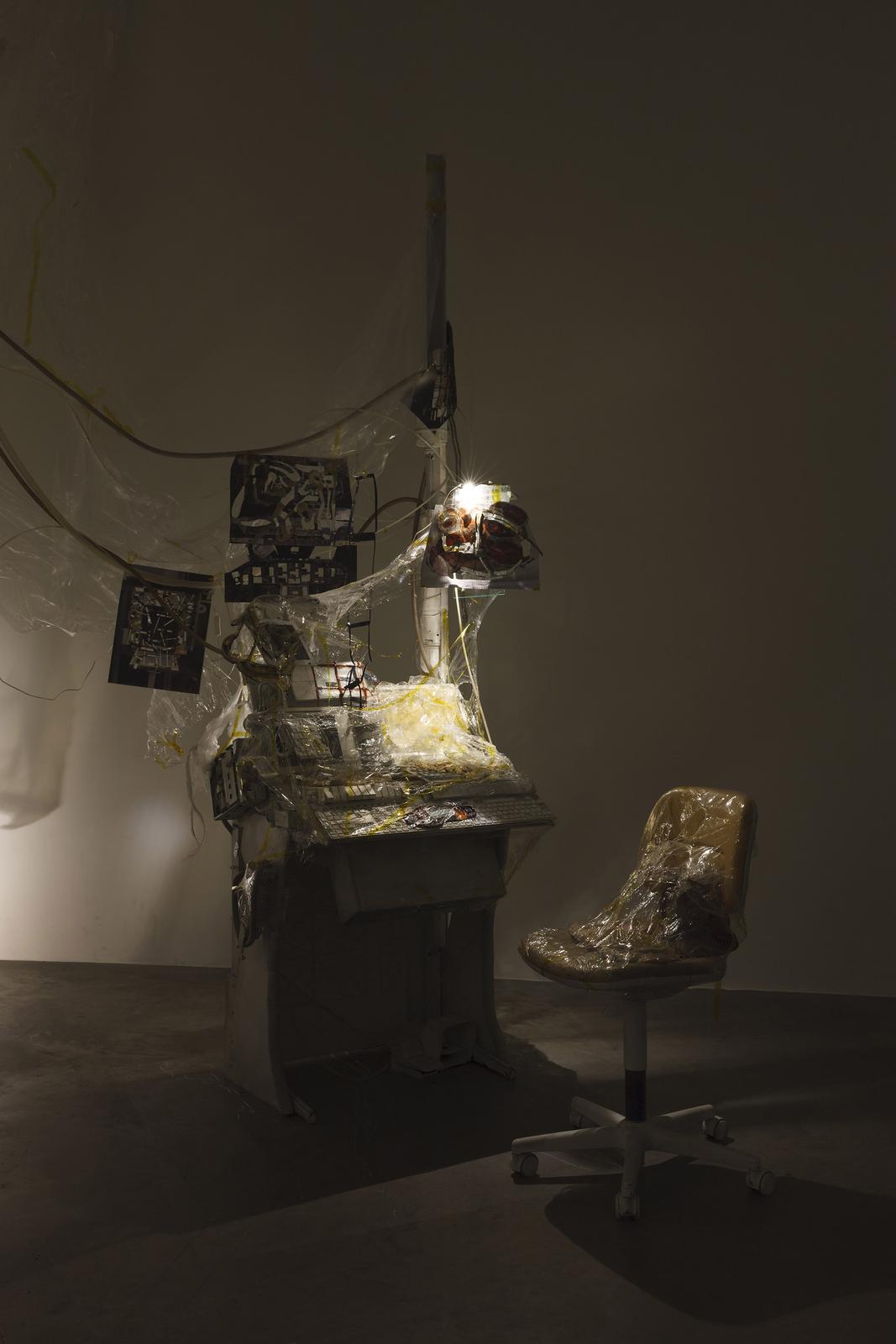 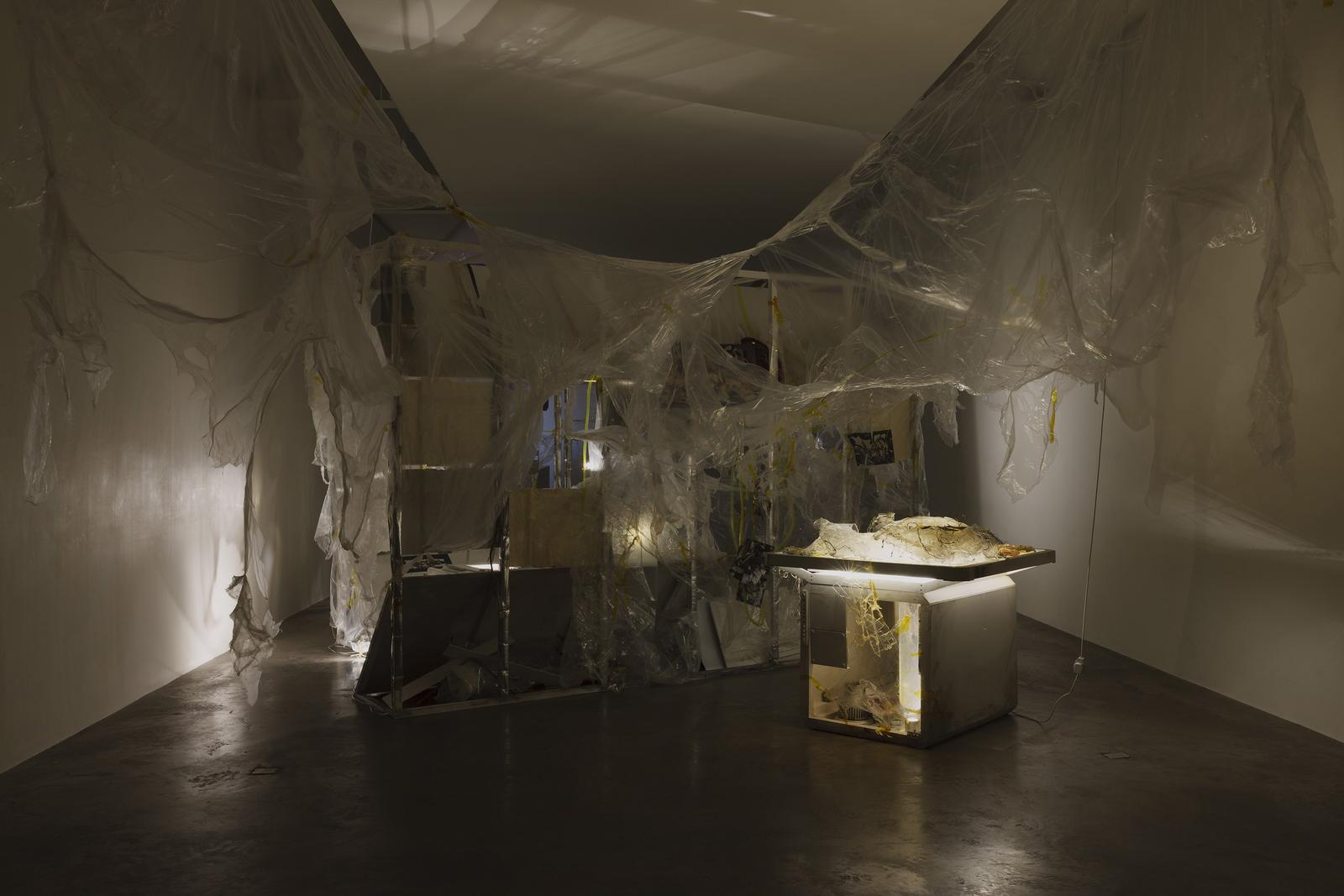 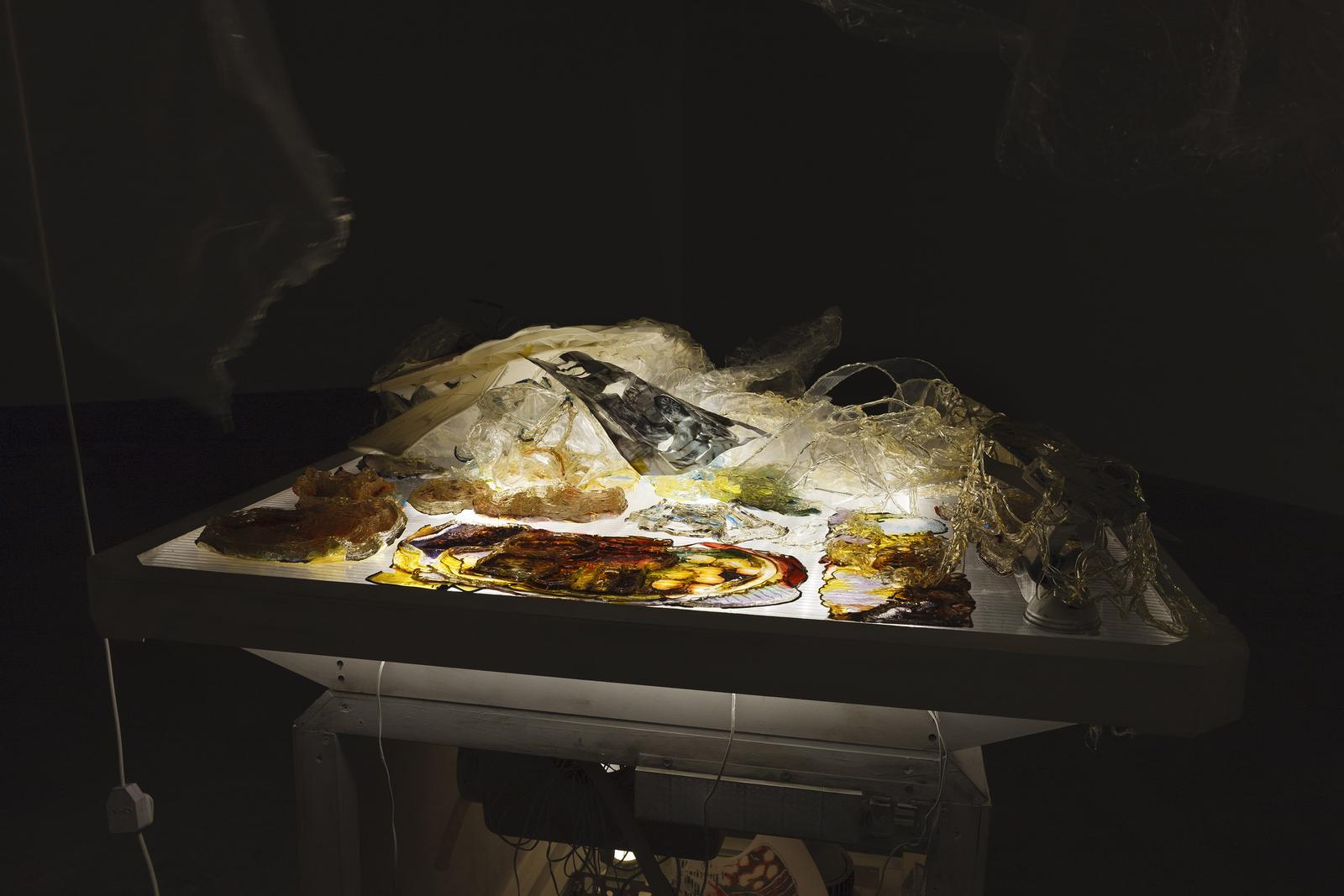 ** EXTRA PERFORMANCE DATE: Due to popular demand, a third performance by Sam Keogh will take place on Saturday 10 March at 4pm sharp **

In Sam Keogh’s Kapton Cadaverine, Kerlin Gallery is transformed into the interior of a dilapidated starship. The ship’s once-white control panels, table and bulkheads are covered in grime. Detritus litters the floor and strange organic forms and collaged images adorn almost every surface. Webs of melted plastic, stuck together with Kapton tape, cocoon the space in a mucosal membrane and the constant white noise of artificial rain underlines the eerie absence of an inhabitant.

The more architectural structures are revealed as props once the painted MDF is spotted. An intentional dissonance forms between these artificial objects and the more deliberately crafted ones – the repeated form of the wall panels for instance, made from Jesmonite and polyurethane resin and infected with adulterants, which blossom just under their surfaces. Or the small, glowing sculptures on the table, with their translucent cell walls built up from layers of acrylic medium, reminiscent of slime molds or architectural models apparently made from sperm.

Though populated by these singular objects, the installation is activated by a performance. It begins with an astronaut waking up in the battered cryopod at the centre of the ship. He displays symptoms of premature thawing: memory loss, confusion, frostbite. His stained outfit mark him out as the source of the ship’s filthy condition. He acknowledges the audience but only as hallucinations, spectral symptoms of a prolonged lack of human contact. Intermittently speaking and listening to the on-board computer, he tries to make sense of his surroundings by reassembling scattered memories of the Earth he left behind. These monologues are interrupted by manic descriptions of androids with liquid latex blood, the bacteria feeding on the ship’s walls, or an explanation of a Soviet philosopher’s idea to circumvent the heat death of the universe through a re-ignition of the Big Bang.

Kapton Cadaverine continues Keogh’s interest in melding performance, installation and sculpture into scrappy and mutable wholes. Sculpture and collage serve as props and mnemonic devices for the performance but are also in excess of these functions, spilling over with idiosyncratic detail and extraneous information. Here, the objects shift between artwork made by Keogh, props used by the performer and ambiguous technologies made by the astronaut in a vain effort to patch up the malfunctioning ship. In this indeterminate space, materials, memories and affects begin to smudge into each other until a sticky cognitive map begins to emerge.

Keogh’s performance will take place on the opening night of the exhibition, Friday 26 January, between 6–8pm, and then again at 3pm on Saturday 10 February. Between performances, an audio recording will re-play on cordless headphones.

Kapton Cadaverine was developed with the help of the Rijksakademie Amsterdam and EVA International. It is the first incarnation of a new body work to be commissioned by EVA International funded by the Arts Council’s OPEN CALL grant.

Artist Talk
Sam Keogh will appear in conversation with Sarah Pierce at Kerlin Gallery on Thursday 1 February, 5pm. This event is part of a collaboration with NCAD’s Master’s Program ‘Art in the Contemporary World’ (acw.ie).

An astronaut light years from home lands in Dublin gallery

“I really think Elon Musk has a vacuum fetish.”

This is where forty minutes of conversation with Sam Keogh has brought me. The Irish artist, who divides his time between Dublin, London and Amsterdam and has just completed a residency at the Rijksakademie, this month presents his new solo show Kapton Cadaverine at the Kerlin Gallery on South Anne Street. Like many of his earlier shows (Four Fold, Puke Performance, Mop), this new sculptural installation features the artist himself. Kapton Cadaverine sees Sam waking up in a cryogenic pod in a filthy room in a degraded starship. The walls are covered in arcane sculptures dripping with something icky and viscous. There’s crud everywhere. Keogh’s clothes are likewise stained and filthy and he embarks on a monologue that lets us know he’s been in this room for some time.—Rachel Donnelly

Martin Herbert’s pick of exhibitions to see in January & February

Somewhere up there, figuratively at least, is Sam Keogh, whose Kapton Cadaverine at Kerlin involves a grimy spaceship interior adorned with collages and sculptures. During the opening-night performance that, in a sense, activates these, an astronaut (Keogh) will emerge from his cryopod after a couple of years of suspended animation and engages with the nested creations; the scenario flipping between exploratory reorientation on a rocketeer’s part and tour of an artist’s studio, the accumulations either artworks or attempts to repair the ship. (Audio from the performance, recorded, will float over the installation for the rest of the show.) Keogh, who’s Irish himself, is interested in ‘how surface and texture can transmit narrative’, as was written in a press text for a 2016 show that used drawings under a floor of plastic sheeting, fleshy sculptural lumps and, again, a performative element to loosely consider the death of Gianni Versace. Looking back on Keogh’s earlier work – in 2012, he was making lumpy multicoloured sculptures intended as a kind of ‘species’ – what’s clear is a consistent commitment to art as processual: whatever the form, it’s in a constant, unstable state of becoming and modulation from without.

The premise of Sam Keogh’s sculptural installation and performance (Saturday February 10th, 3pm) is that an astronaut groggily awakens from cryogenic sleep on a dilapidated starship. Both astronaut and starship are distinctly grungy and the worse for wear. The interior is covered with slime and tacked clumsily together. What’s going on? Fragments of a narrative emerge in the astronaut’s dazed monologue – replayed throughout the show.