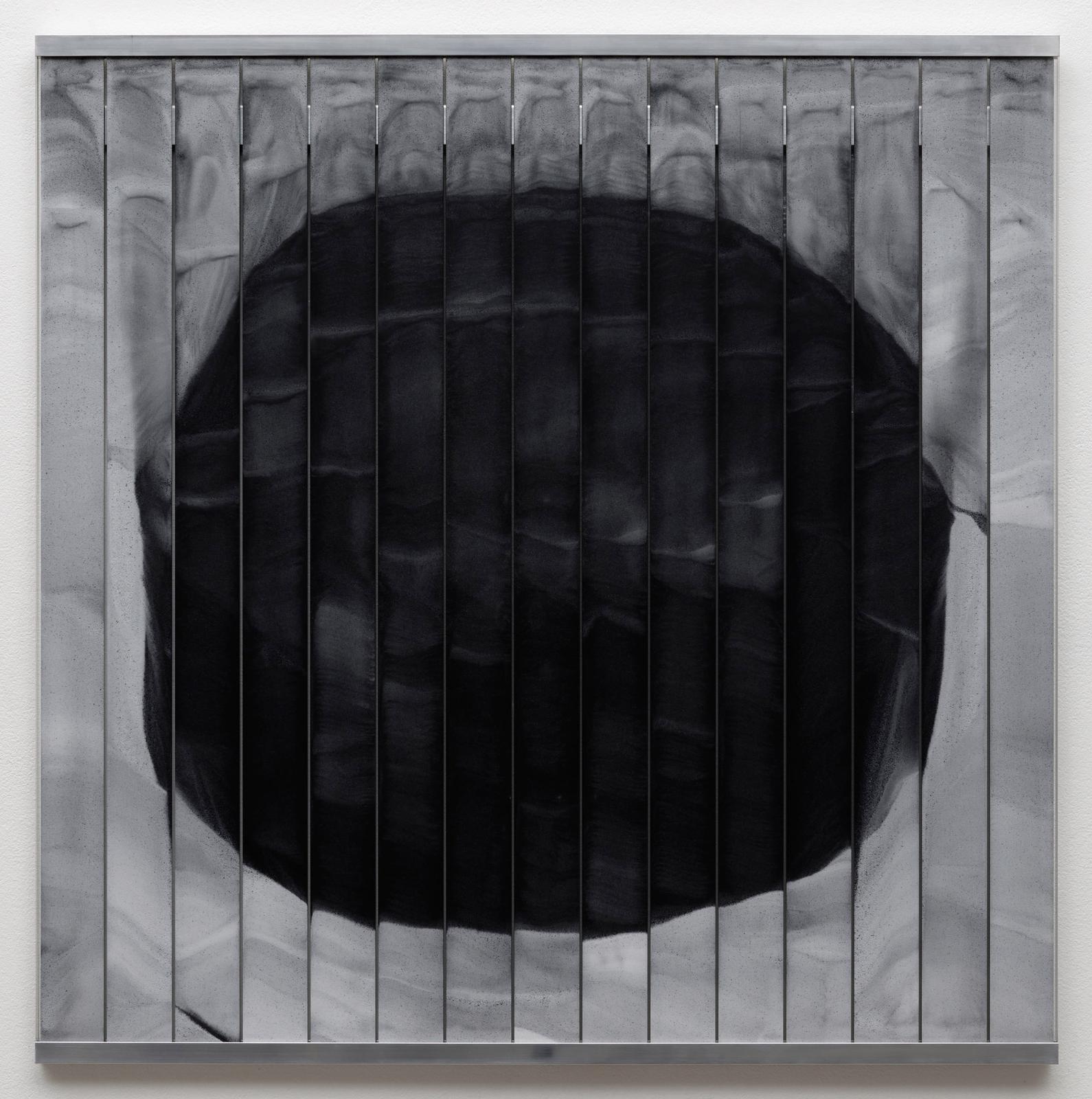 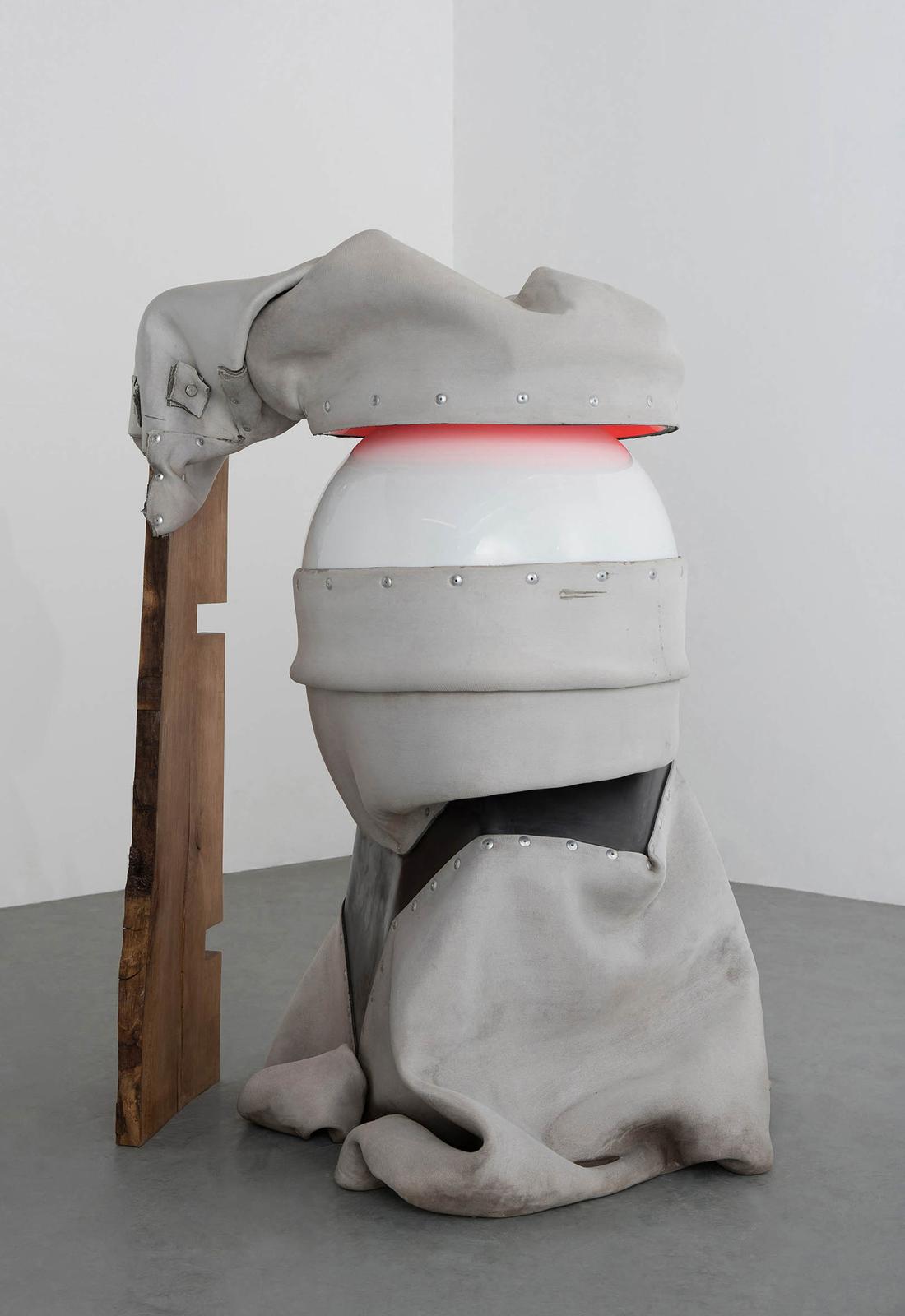 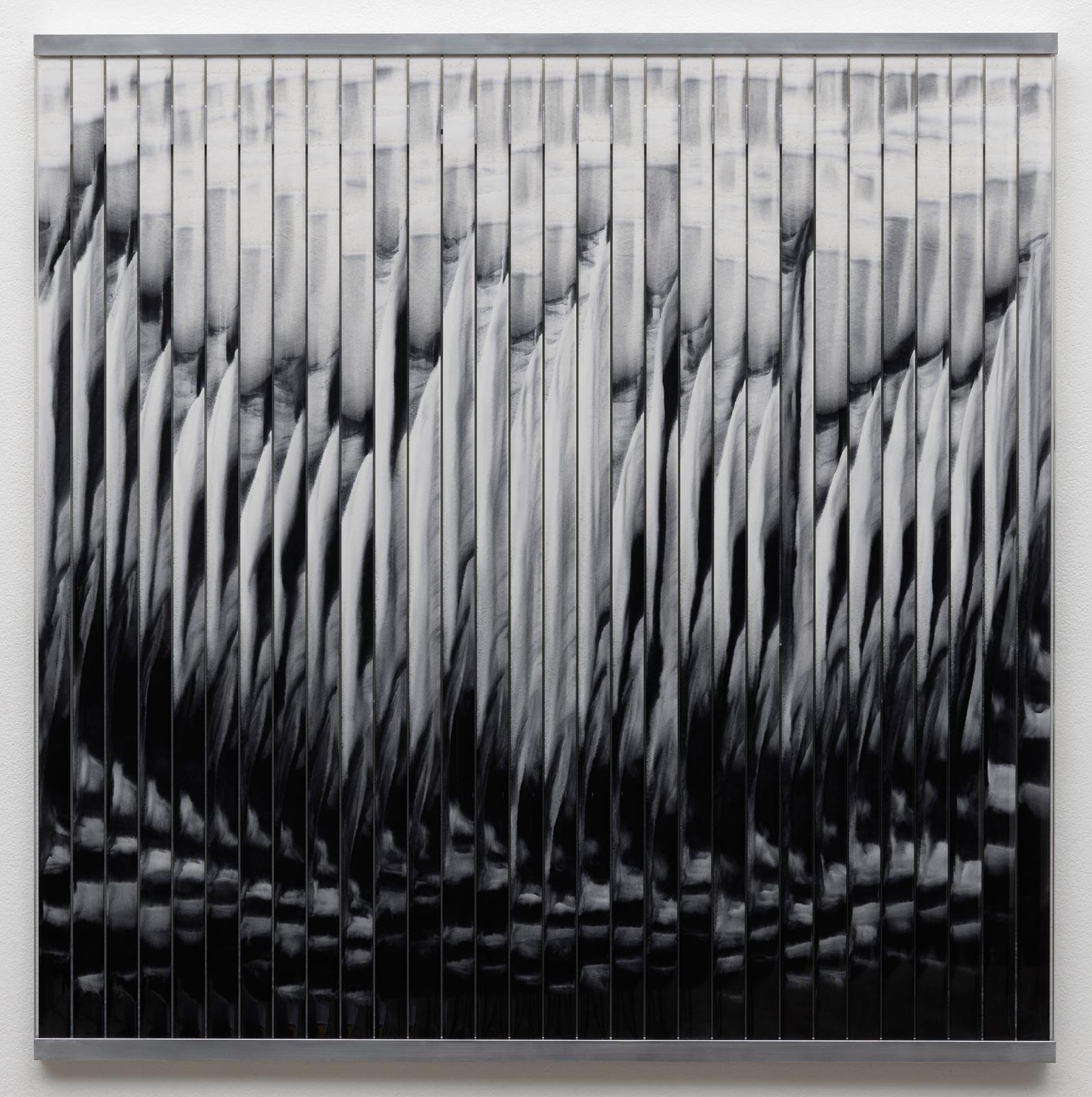 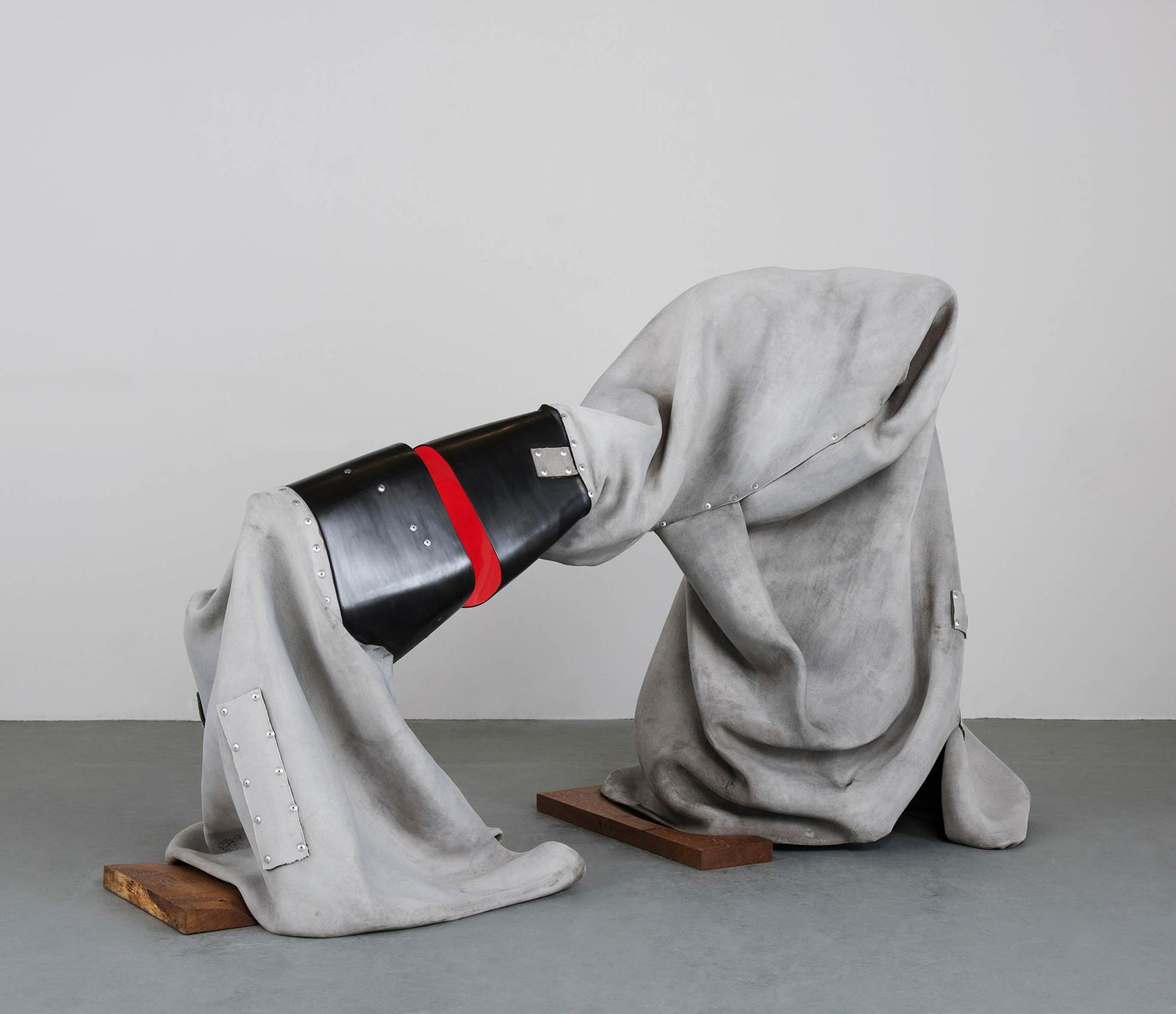 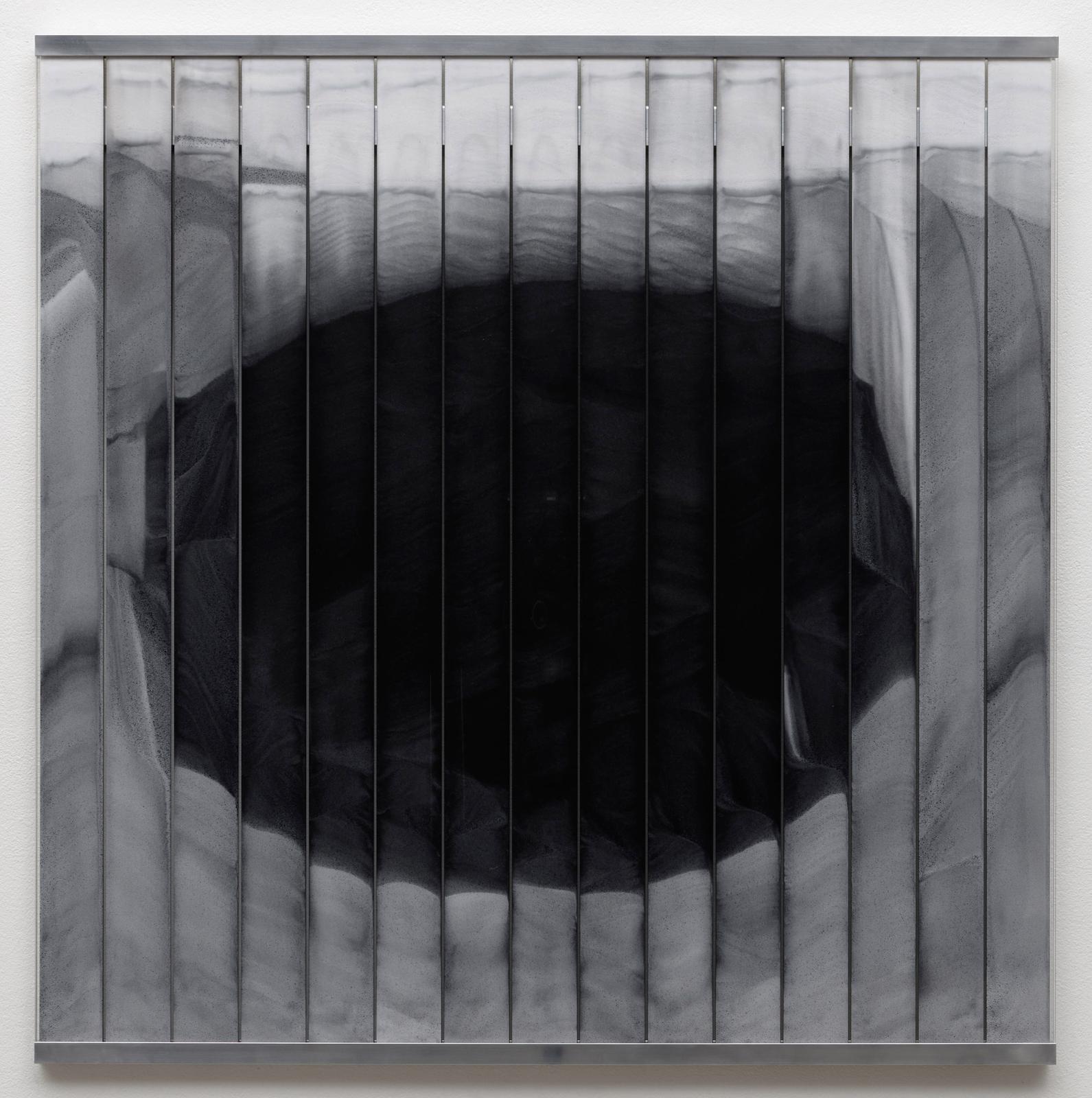 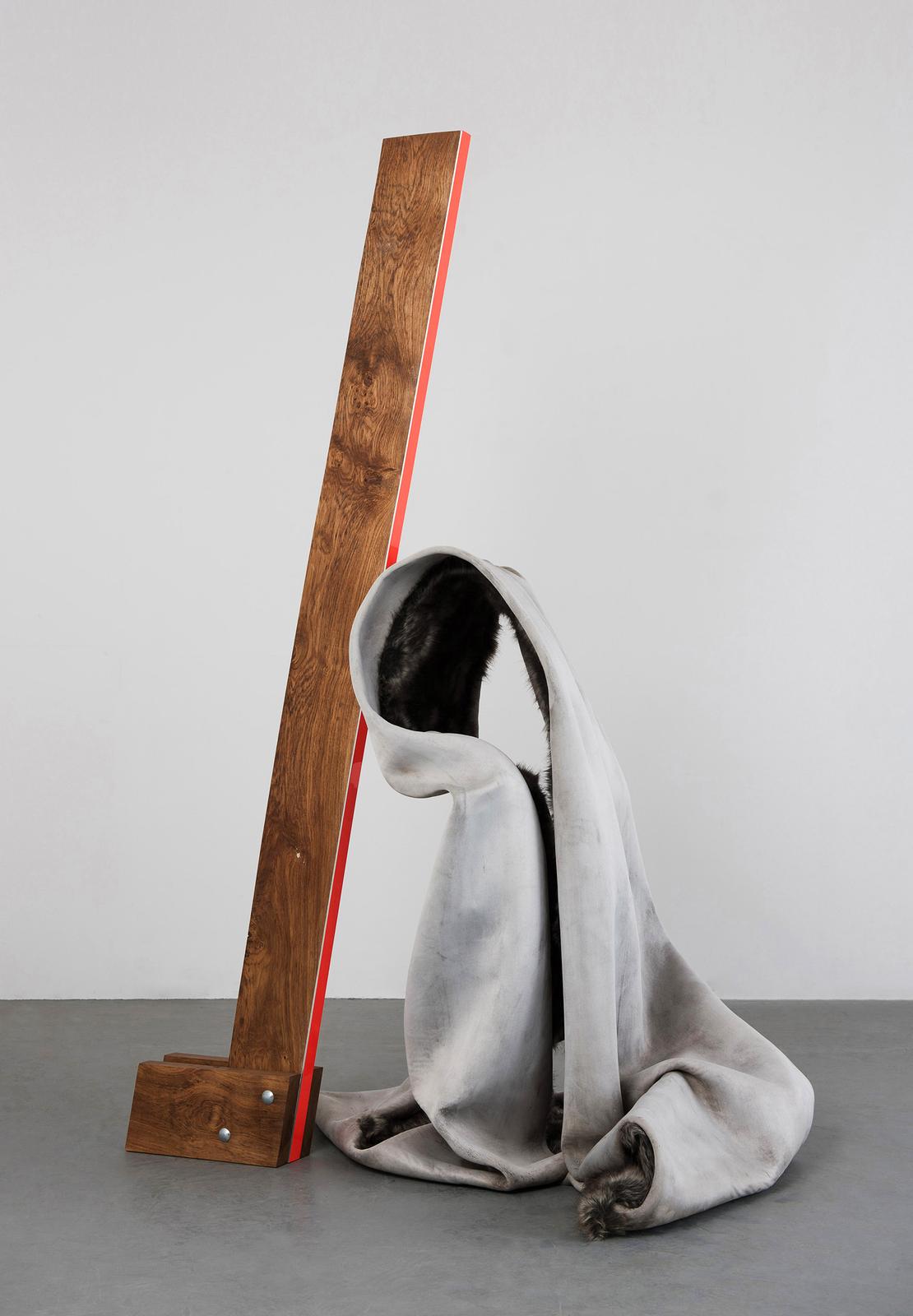 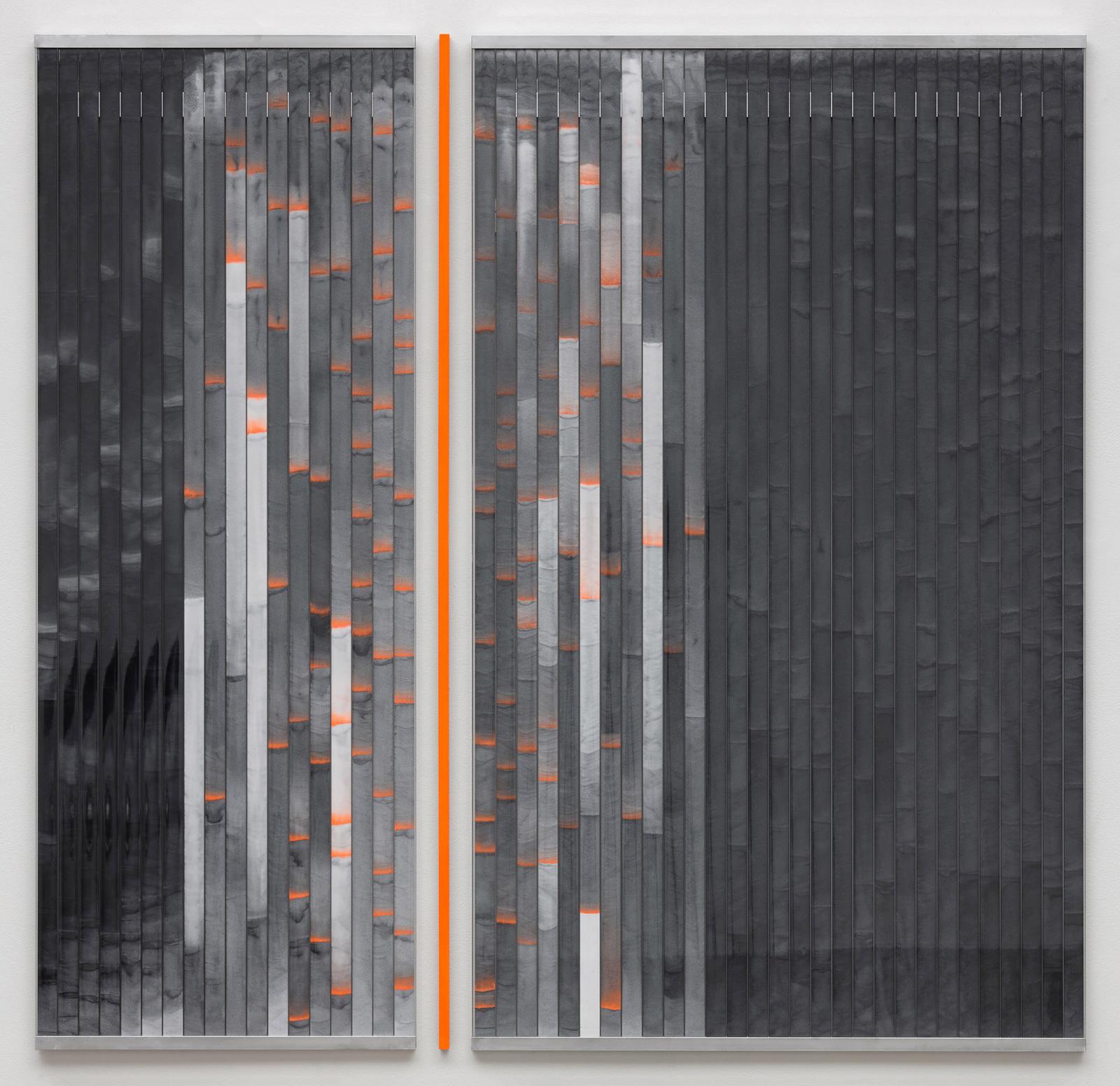 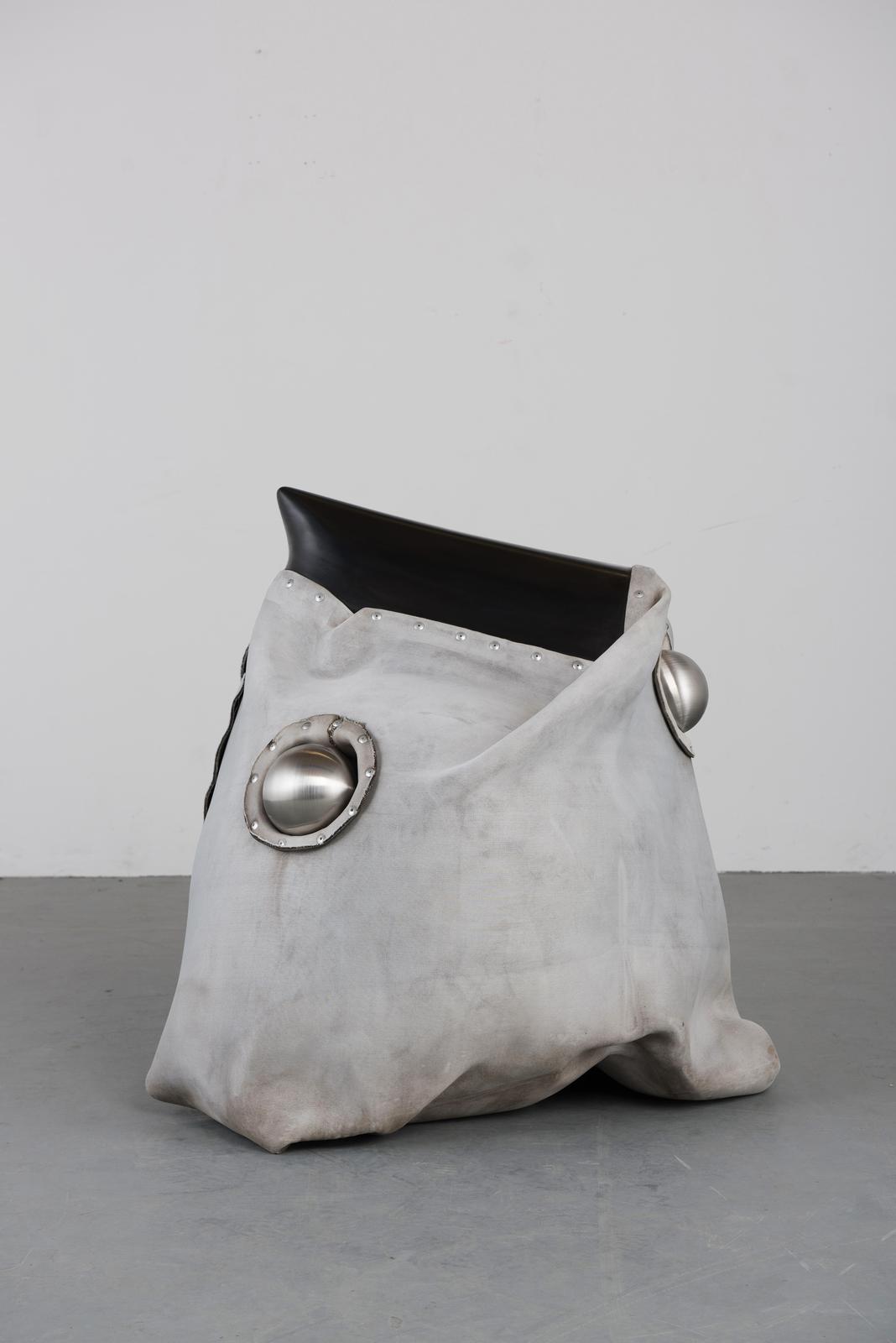 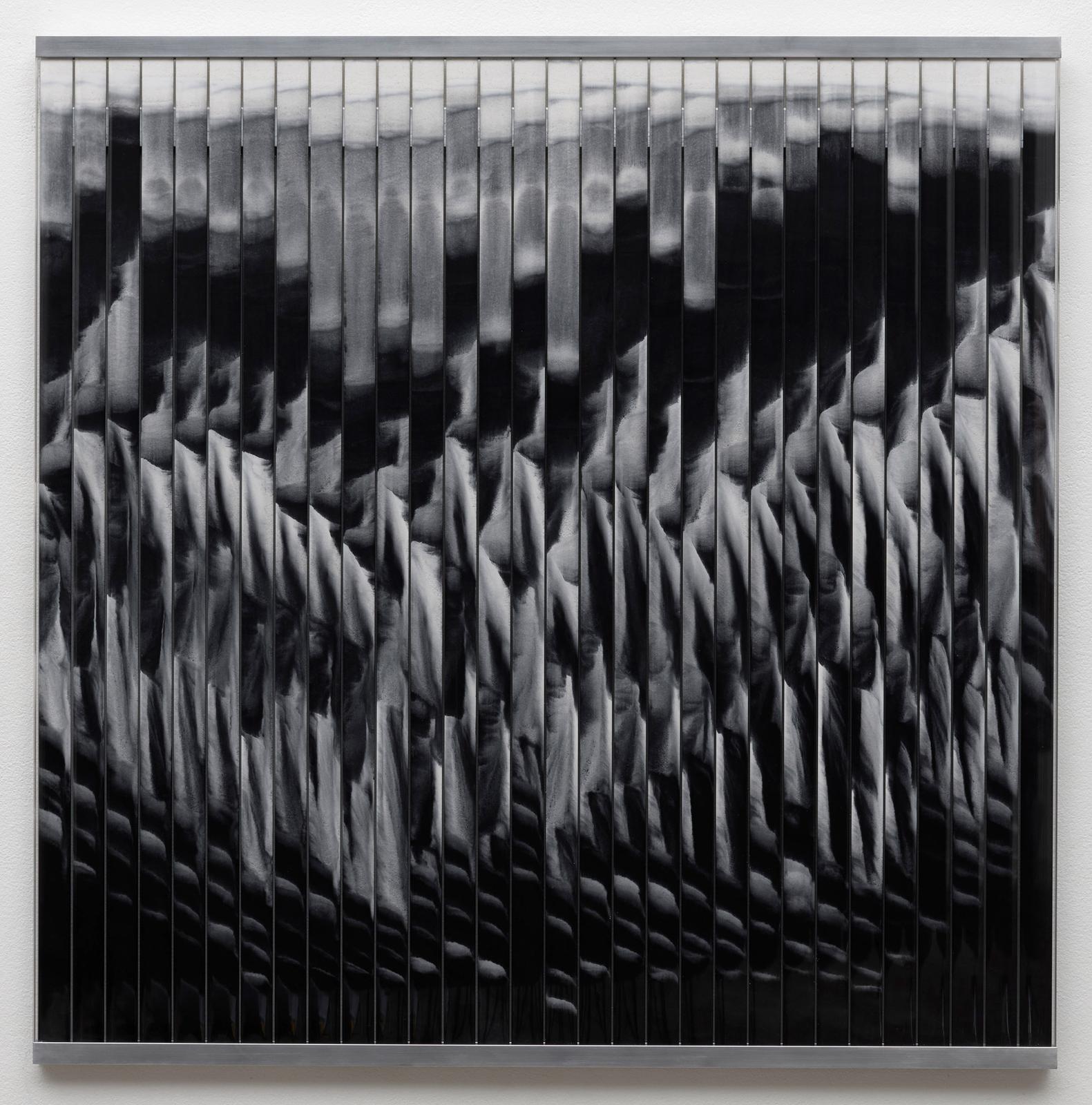 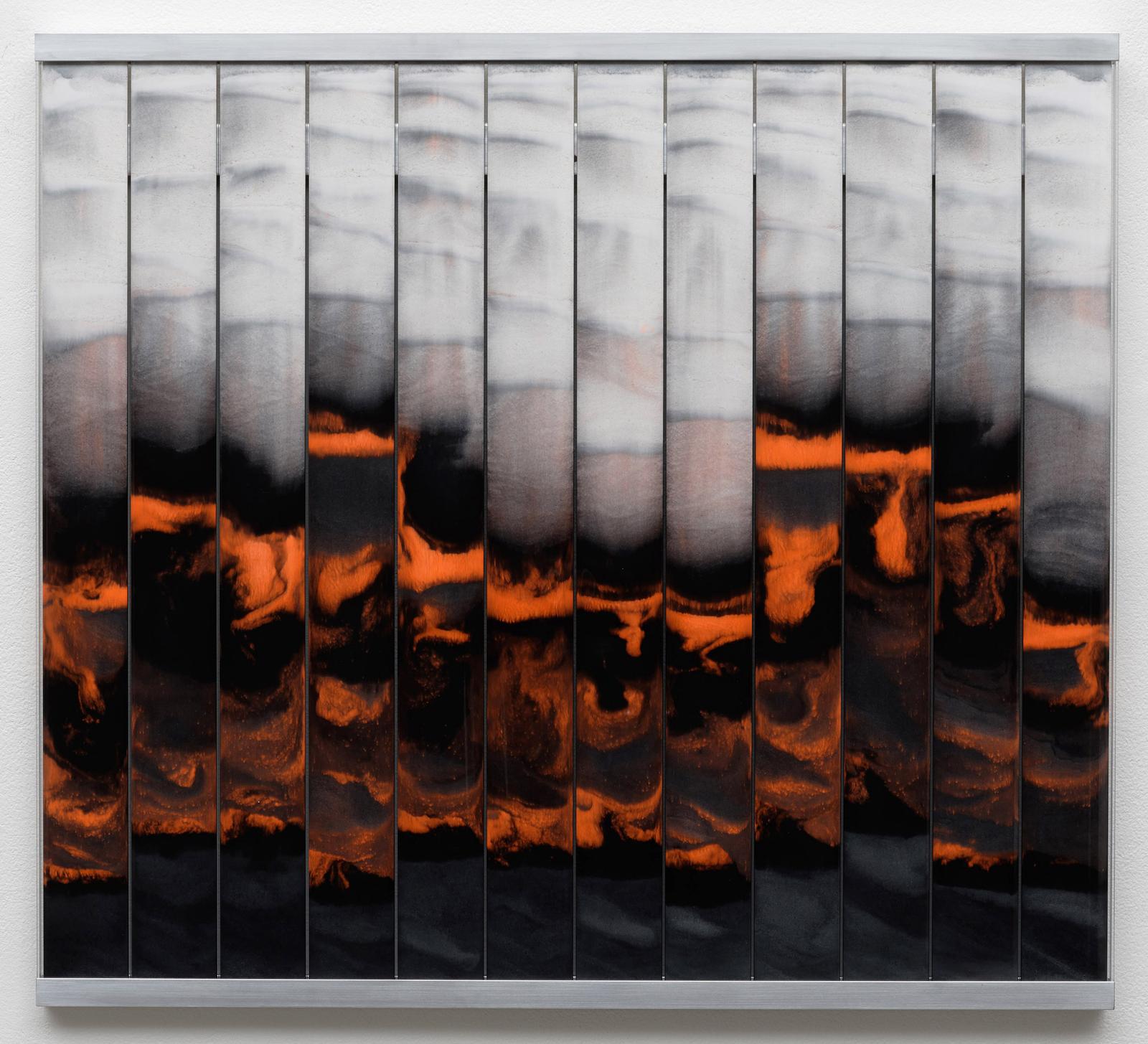 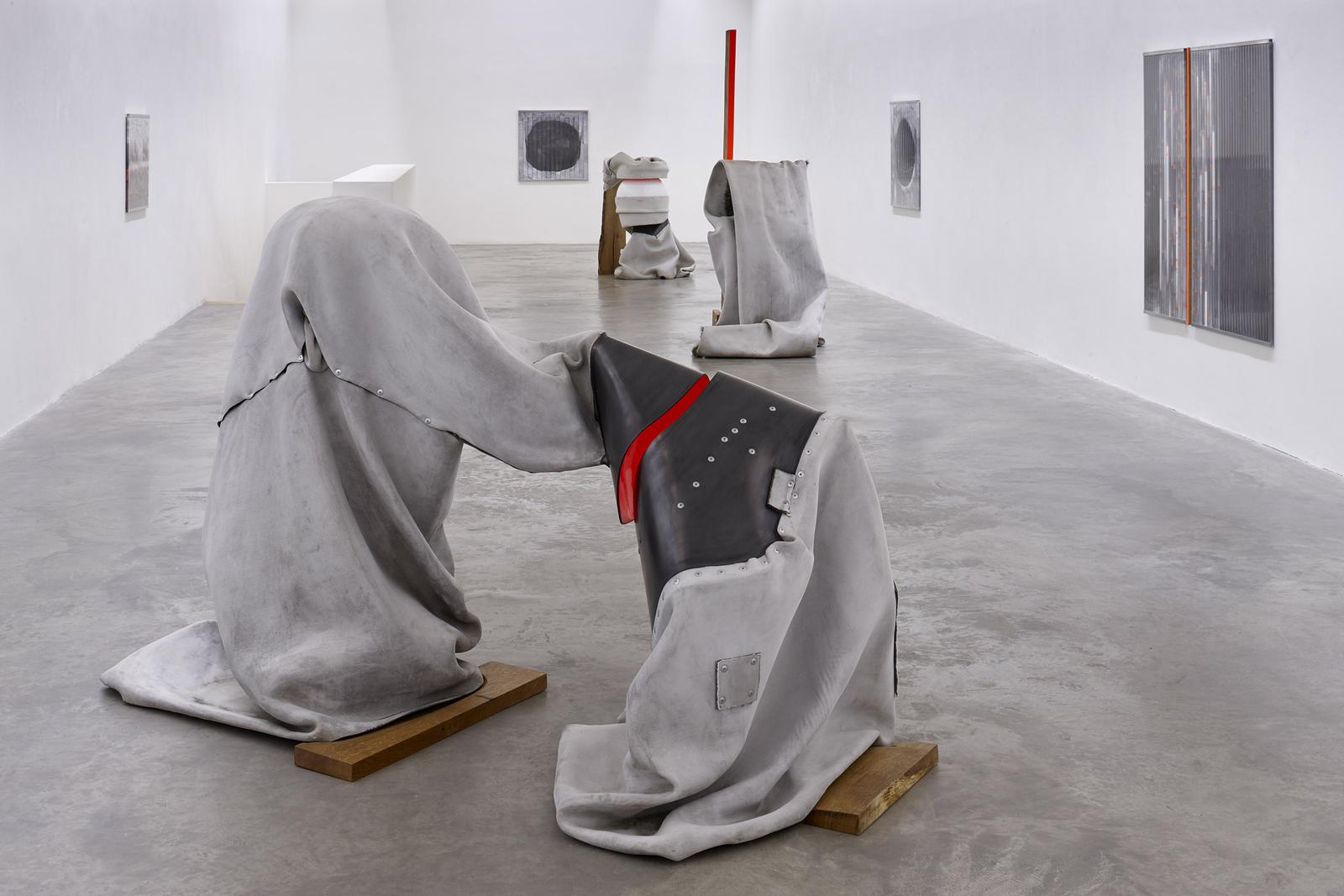 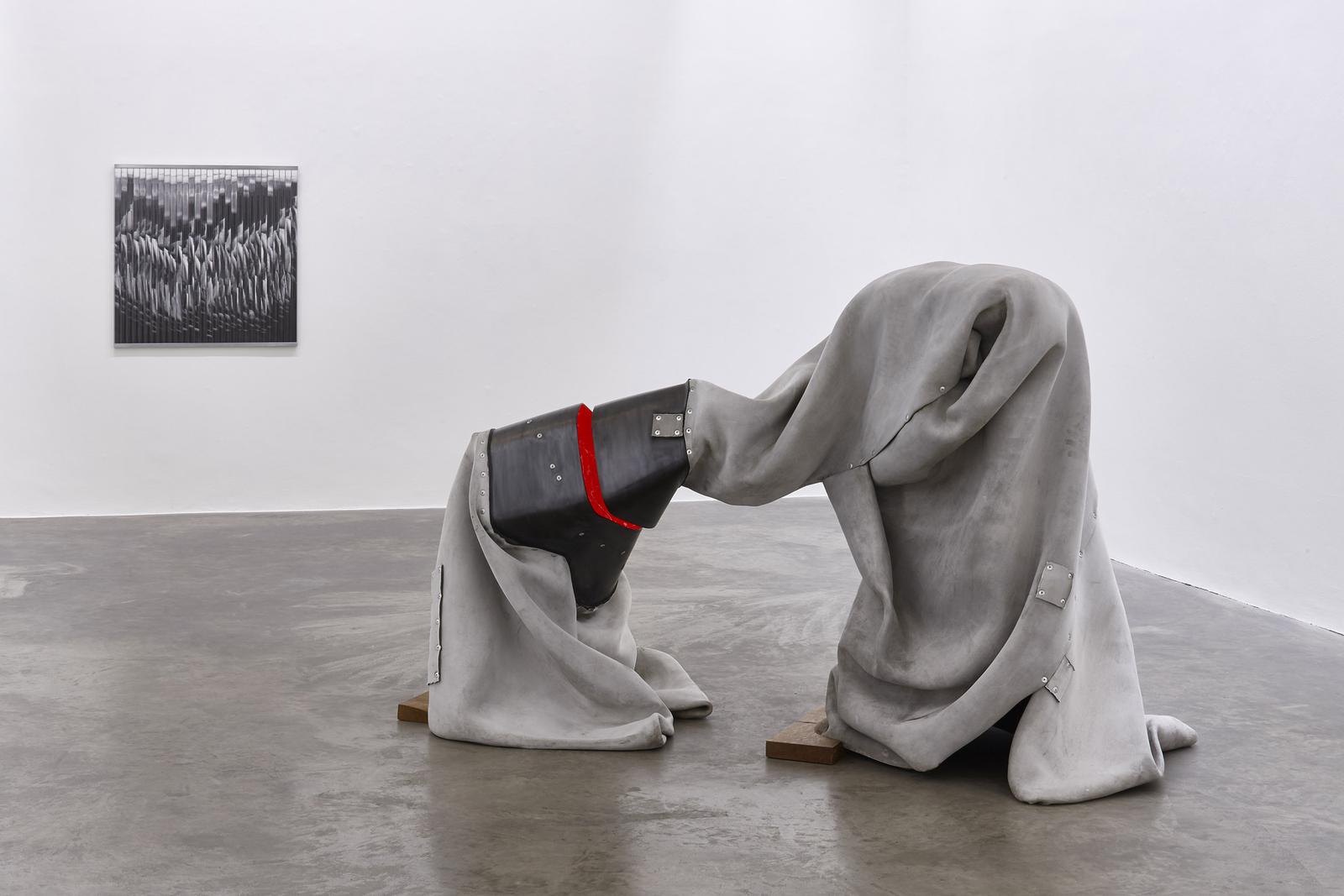 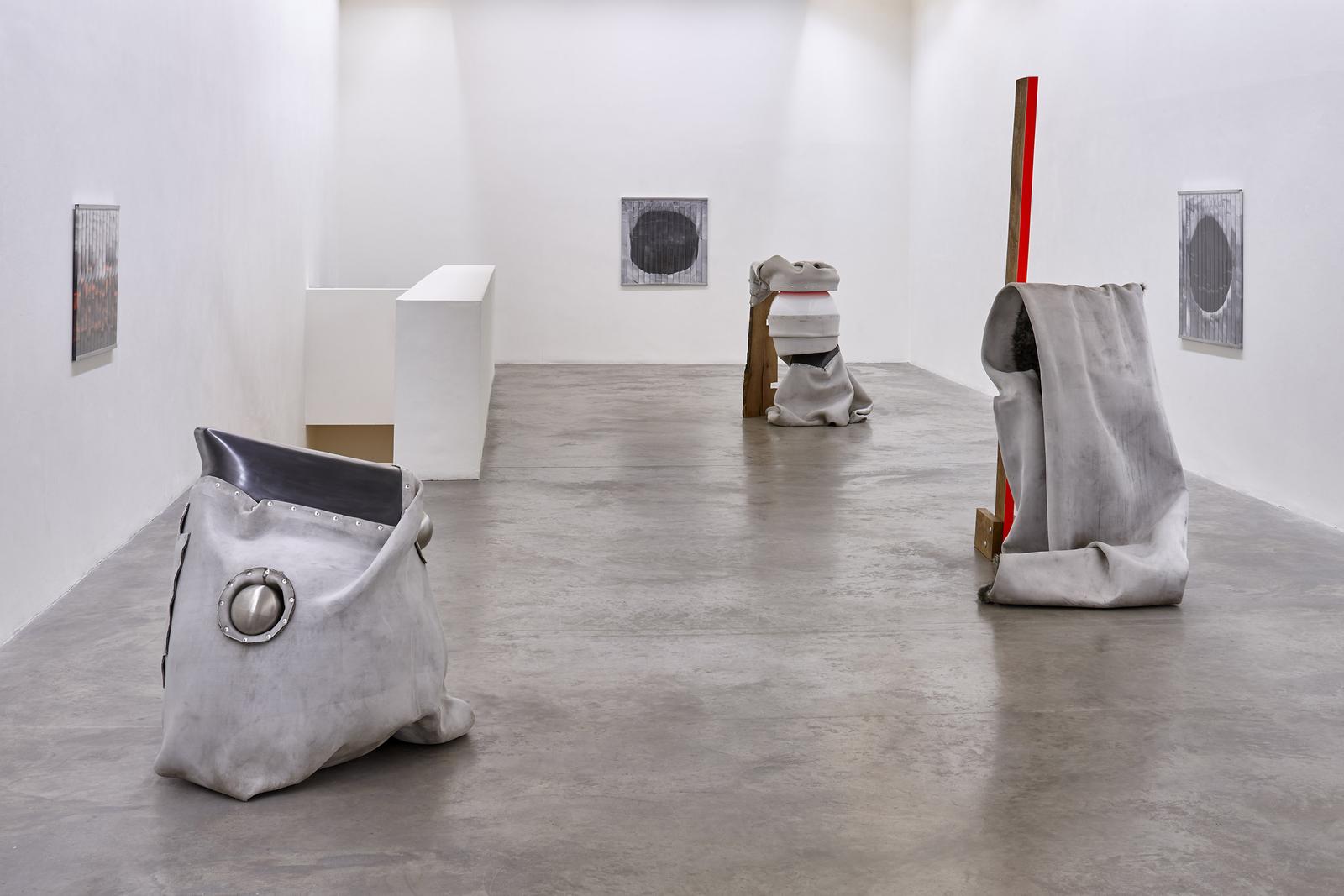 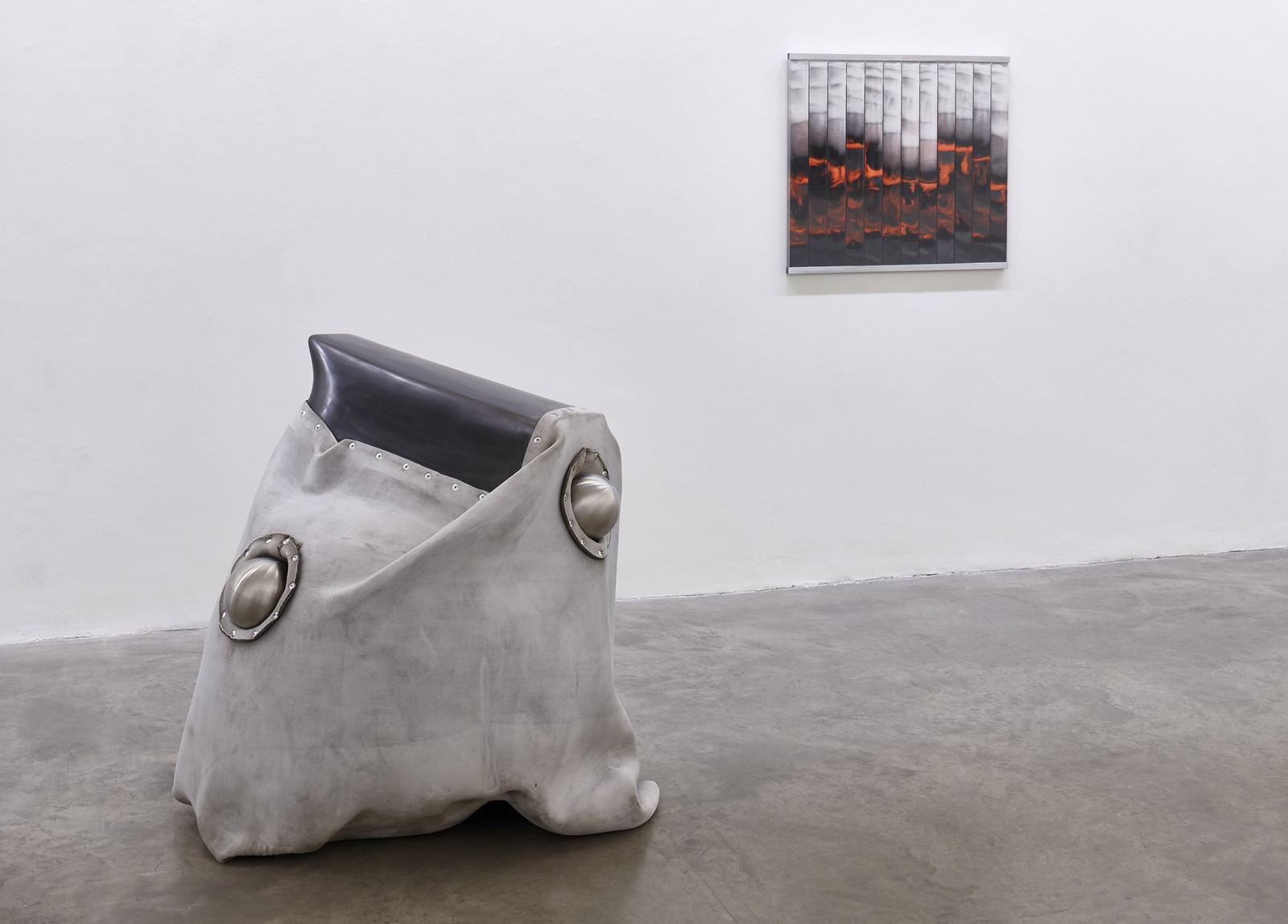 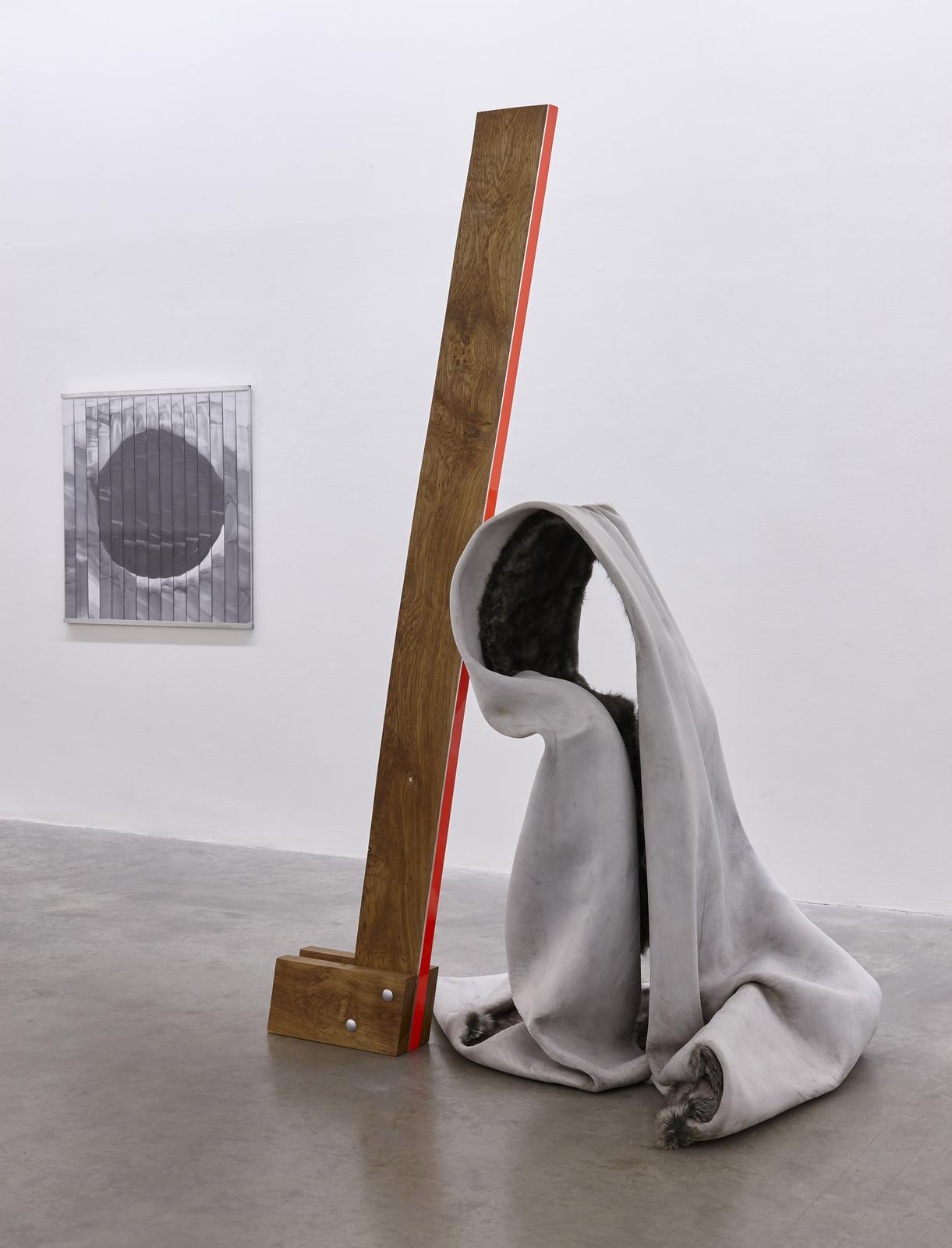 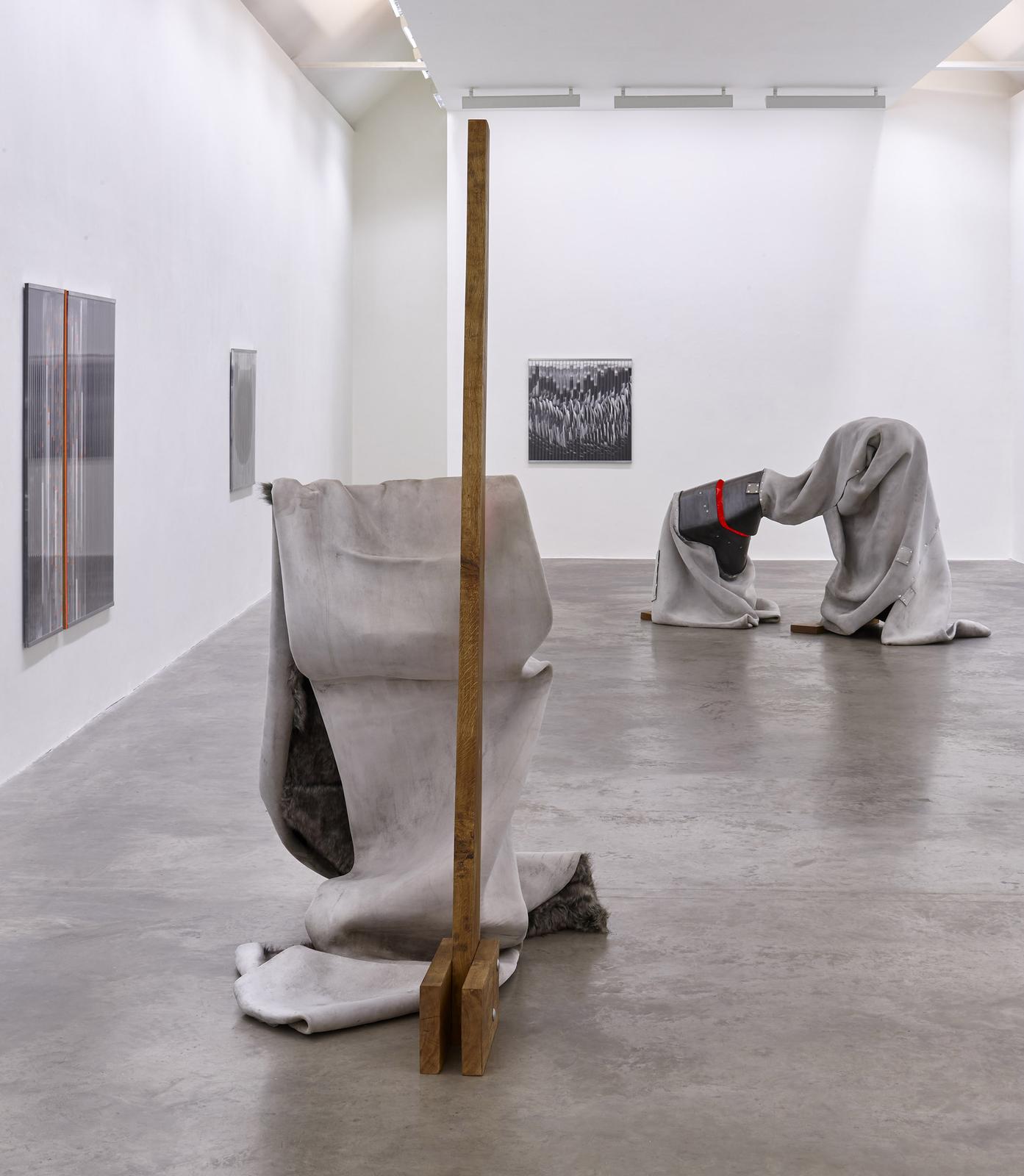 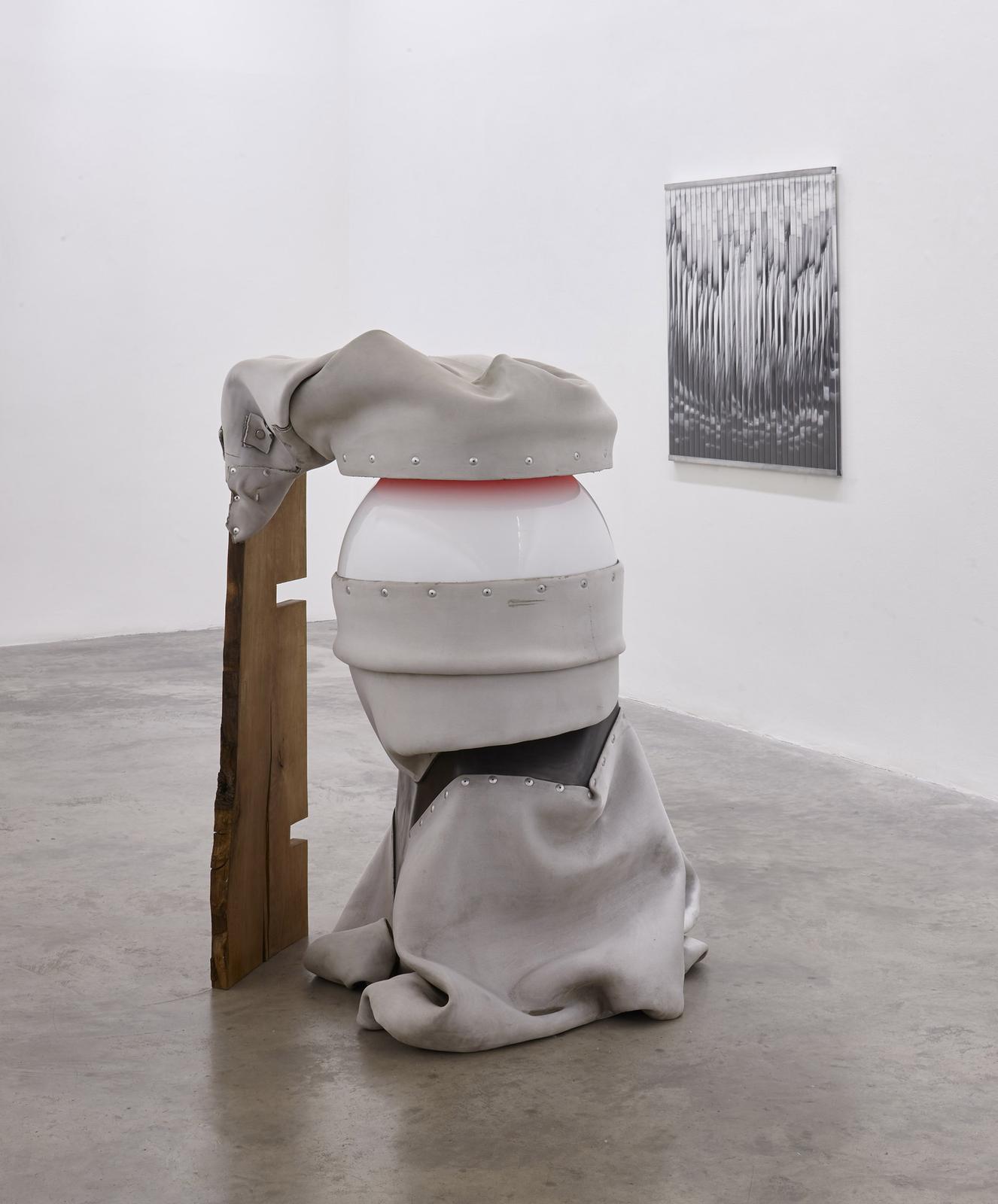 Kerlin Gallery is pleased to announce an exhibition of new work by Siobhán Hapaska (b.1963, Belfast). This is Hapaska’s fourth solo show at the gallery and her first in five years. The exhibition will open with a reception in the company of the artist on the evening of Friday 16 December.
At the very heart of Siobhán Hapaska’s work is a deep and sustained consideration of the complex nature of human relationships. Her sculptures, wall works and large-scale kinetic installations provide a sophisticated and nuanced articulation of our suspended state, creatures held in tension or equilibrium between powerful opposites. This exhibition features work from a new series of floor-based, concrete canvas sculptures, and wall works, which again draw our attention to formative contradictions within our society; freedom versus constraint, movement versus stagnation, nurture versus neglect and violence versus surrender.
The artist’s innovative use of materials and restless experimental approach reflect her interest in such dualities, frequently embracing and celebrating stark contrasts; matt concrete is set against high gloss fibreglass, the organic plays off the synthetic, the monochrome versus intense colour, the hard meets the soft and the heavy works alongside the light.
In this show, two materials dominate – concrete canvas and acrylic wall sheeting. Both are relatively new products developed for the building industry. They allow for speedy construction and in times of crisis are used to create emergency dwellings. Replacing traditional and familiar glass and stone they embody contemporary engineering solutions. Hapaska has characteristically reappropriated the materials to dramatic effect. The concrete canvas has been skillfully manipulated and formed into semi-figurative sculptures. With titles such as Love, Us, Bird and Touch they appear to articulate what is most vulnerable and most in need of emergency protection in our current global situation. These deliberately chosen materials are forced into a new life as sculptural form, all the while calling to mind the mass displacement of refugees or those escaping natural disasters.
On the surrounding walls of the gallery the acrylic sheeting normally used as lightweight glazing have been filled by the artist with the materials of her work ground to a fine dust. Potential windows become dense, opaque compositions. Powdered white marble, carbonised oak and fluorescent powder pigment, the materials of nature and art, fall and mix as sedimentary layers that contaminate and enrich each other within the confines of the transparent sheeting. Each work offers a very different, almost dizzying cross section resembling rock and soil deposited over millennia.
Siobhán Hapaska graduated from Goldsmiths College in London in 1992. Her work was included in the seminal group show Wonderful Life at Lisson Gallery in 1993 and she had her first major solo show, Saint Christopher Legless at the ICA, London in 1995. In 1997, Hapaska took part in Documenta X and in 2001 she represented Ireland at the 49th Venice Biennale. Recent solo exhibitions include Sensory Spaces, Museum Boijmans Van Beuningen, Rotterdam, 2015; Magasin 3, Stockholm, 2013, The Nose that Lost its Dog, Glasgow Sculpture Studios, Glasgow, 2009 and Camden Arts Centre, London in 2007. Selected group shows include 2116, Glucksman Gallery, Cork, travelling to Eli & Edythe Broad Museum, Michigan, 2016; The Mobility of Facts, Bloomberg Space, London, 2016; some are nights other stars, Towner Eastbourne, UK, 2016; Magnetism, Hazelwood House, Co Sligo, 2015; La La La Human Steps, Museum Boijmans Van Beuningen, Rotterdam, 2015 and British Sculpture: A View Through the 20th Century, Royal Academy of Arts, London 2011.
Her work is in many major institutional collections including Museum Boijmans Van Beuningen, The TATE, The Irish Museum of Modern Art, The Ulster Museum, The Boston Museum of Fine Arts, Massachusetts Institute of Technology, The Hirshhorn Museum and Sculpture Garden among other public institutions.

First is Hapaska's overall palette of willow-charcoal-grey with beams of hazard orange and cardinal red. Then it's her forms: heavy, undulating cloth bearing the weight of its material conceit, concrete. Some of the forms look like they are staged, ready to be studied with pencil and paper by young masters. Others are cowled like Philip Guston's KKK, utilising the same volume-making motif of repair patchwork that Guston did: a stitch in time saves nine.

Born in Belfast and based in London, Siobhán Hapaska is one of our most innovative and stimulating artists. Her impressive CV includes the 49th Venice Biennale and such signifiers of international acceptance as Documenta. Her latest show provides the kind of aesthetic jolt one encounters all too rarely in contemporary art.—John O'Sullivan

With its jagged rhythms and calculated incongruities, Siobhán Hapaska’s recent work at the Kerlin Gallery draws a line under a troubled year. The interruptions and surprises built into the fabric of each piece, whether it is hanging on the wall or a floor-sited sculpture, challenge conventional ideas of wholeness and harmony and coherence. When the surrealist artist André Breton was reading a book by Comte de Lautréamont (the pen name of Isidore-Lucien Ducasse), he leapt on one startling phrase: “As beautiful as the chance encounter of a sewing machine and an umbrella on an operating table.” That, Breton thought, was surrealism.—Aidan Dunne

How do works imbued with a complex mix of materiality, emotion, unease and resilience evolve over time? How much does the space in which they’re created matter? ArtReview meets the London-based artist on a train to Eastbourne—Helen Sumpter

Siobhán Hapaska’s complex sculptural installations are often constructed through the juxtaposition of opposites. Her work throws up relationships between things that might seem contradictory at first glance. These contradictions involve not only the themes of her art, but also the materials she uses; the structure of the pieces; and her working methods. Hard/soft; furry/spiky; made/grown; natural/synthetic; machines/plants; urban/rural; human/animal; these are just some of the dichotomies that frequently appear in her sophisticated and meticulously fashioned sculptures. Perhaps these all speak to a more general and overarching theme with vital contemporary relevance: the fraught relationship between culture and nature; or of humans to their environment. And in doing so her work broaches important social and political issues as well as sculptural ones.—Francis Halsall