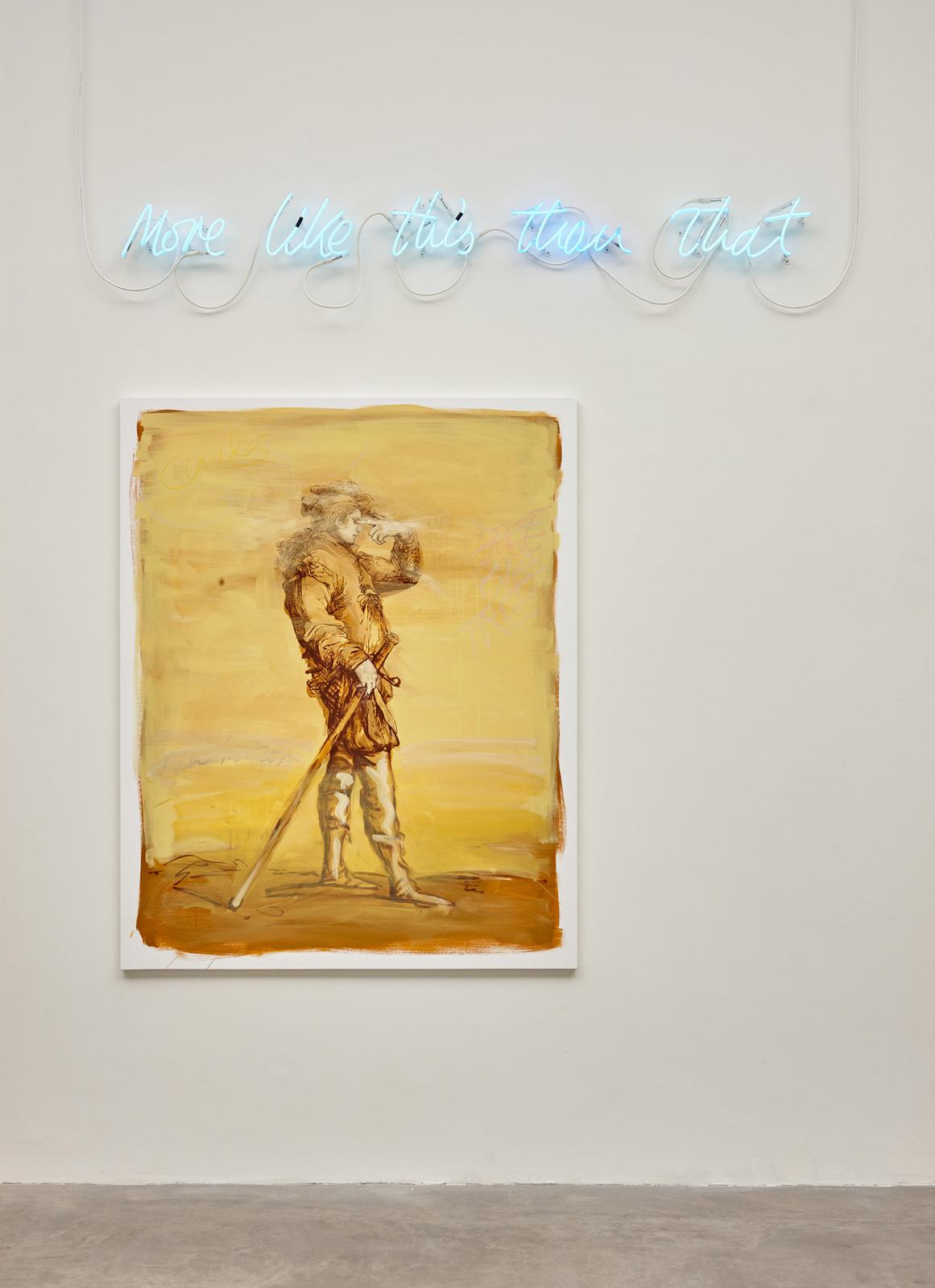 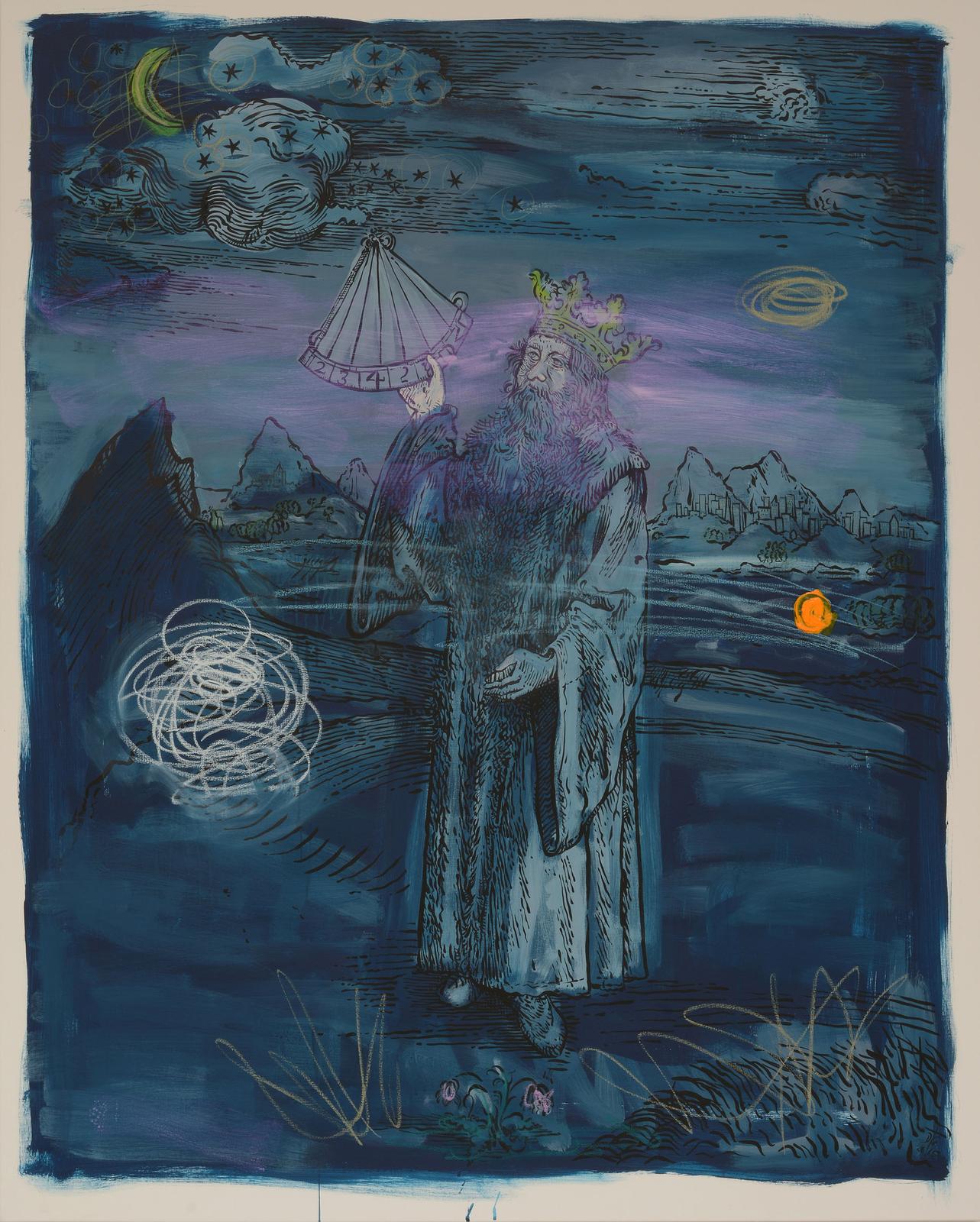 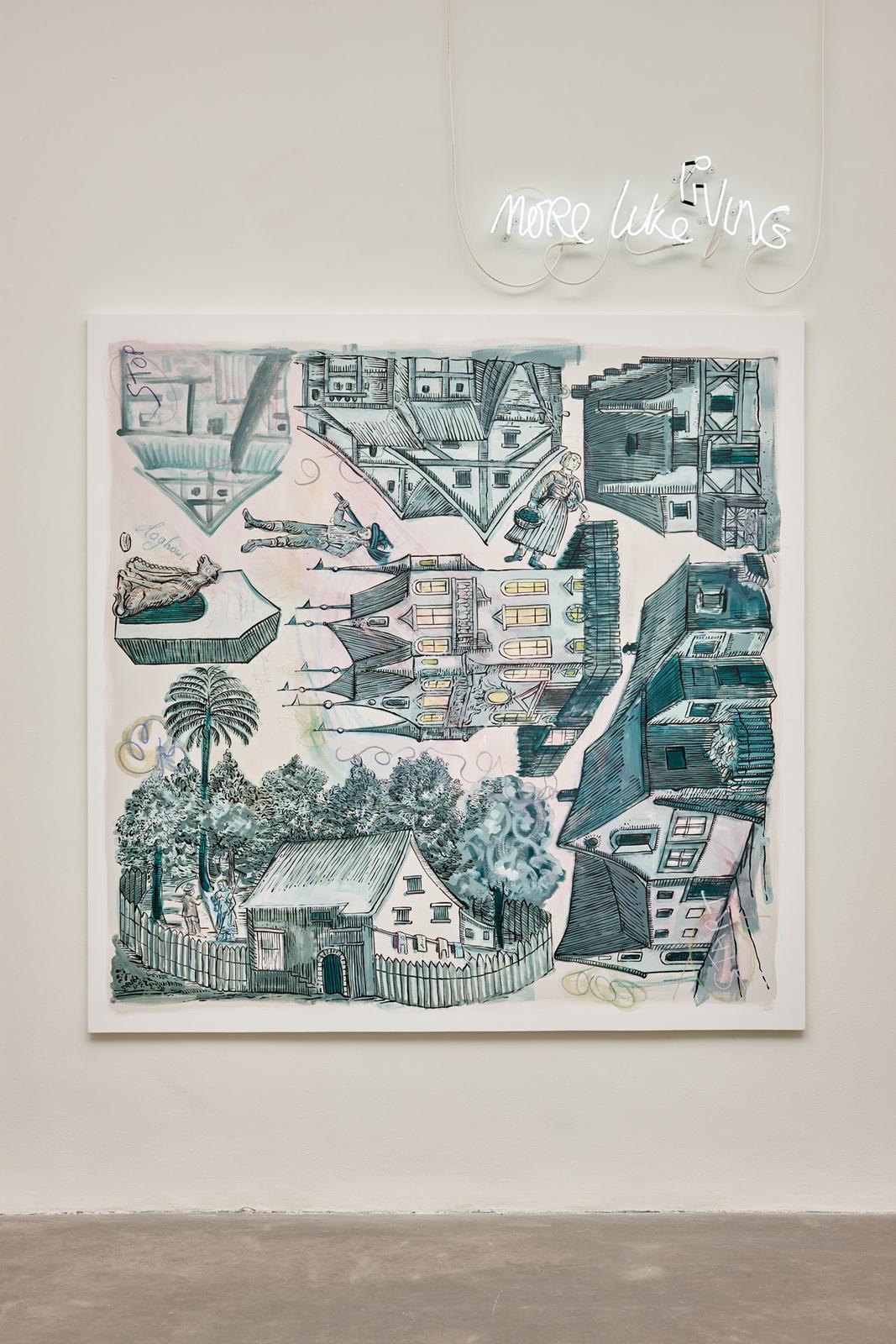 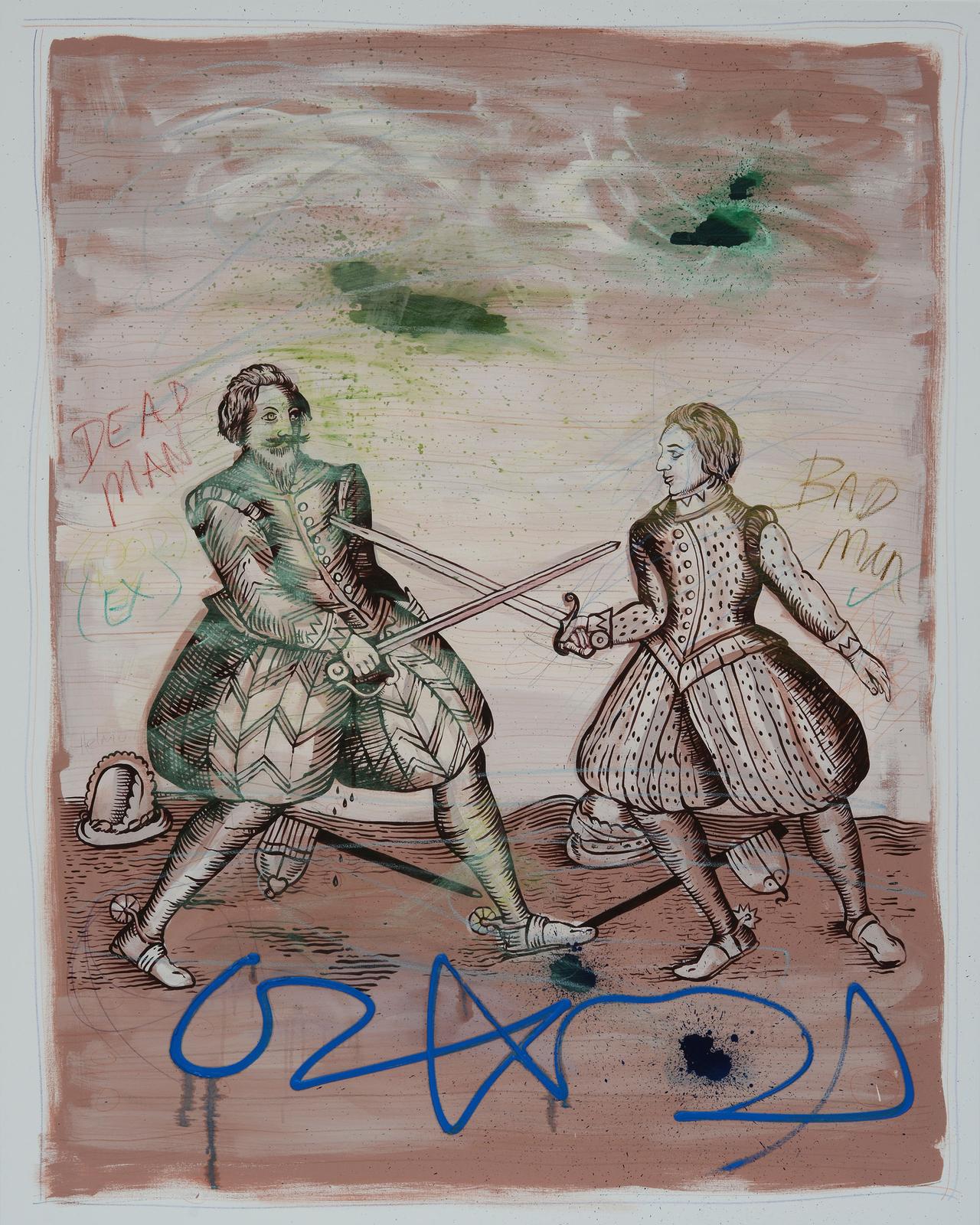 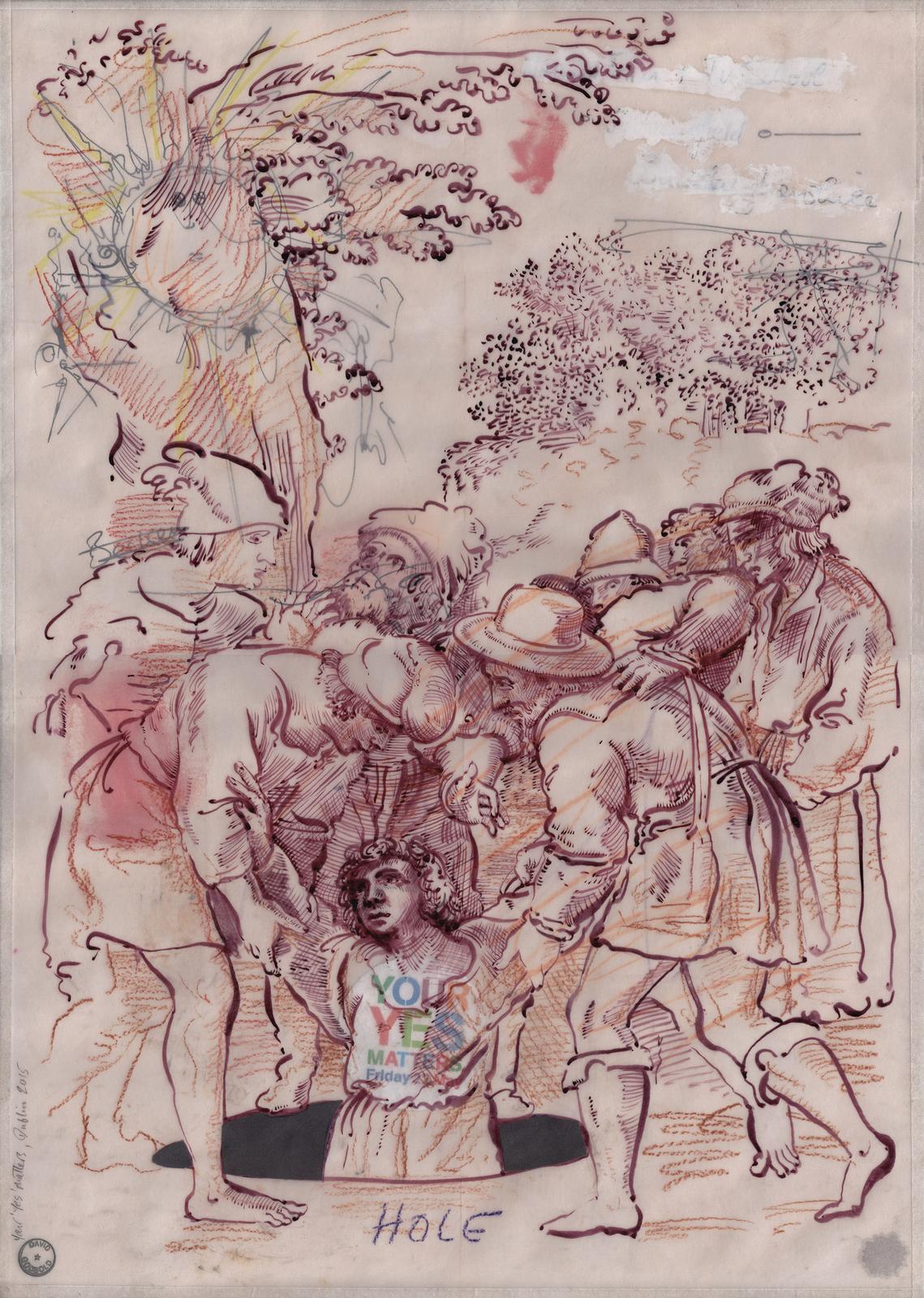 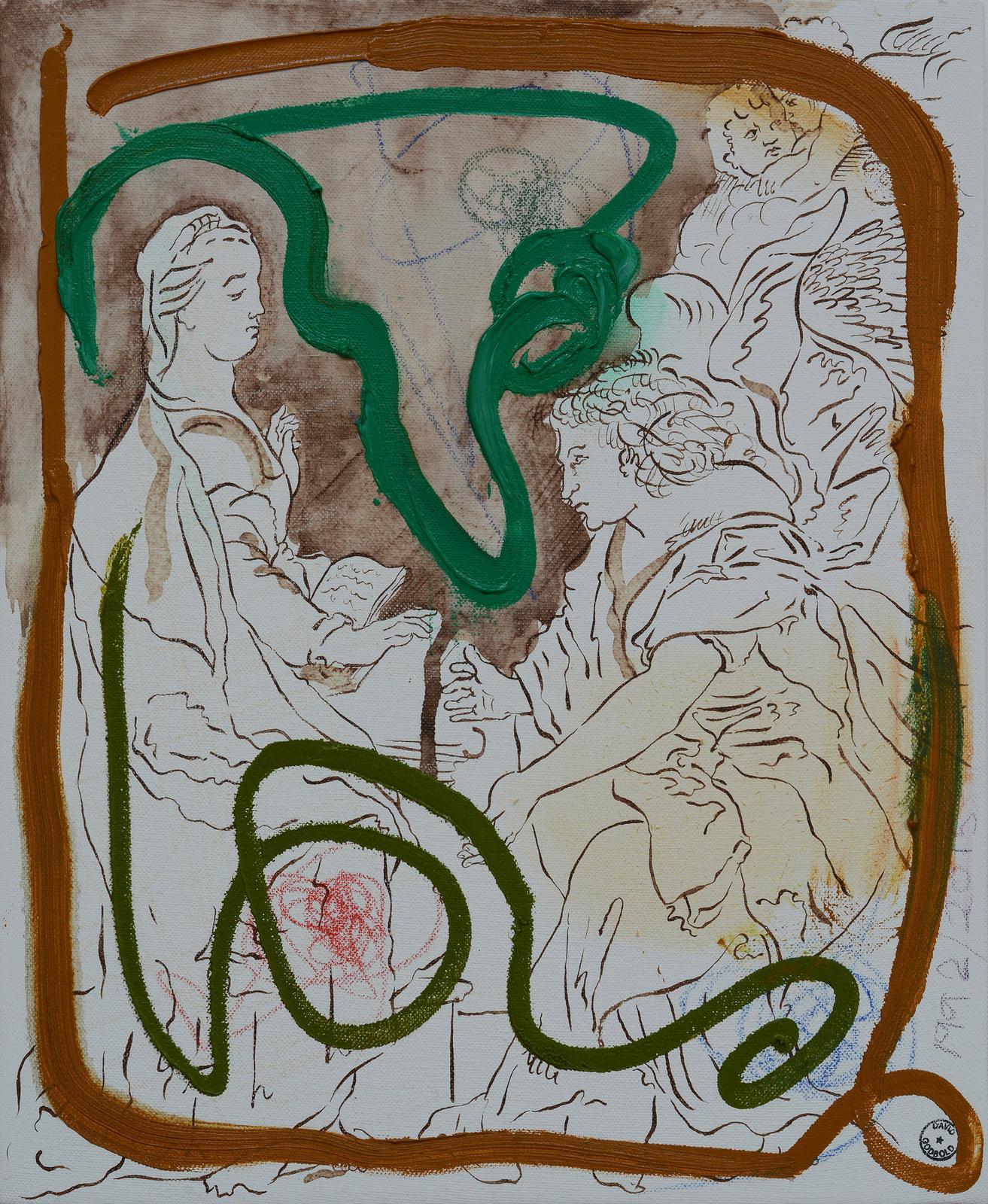 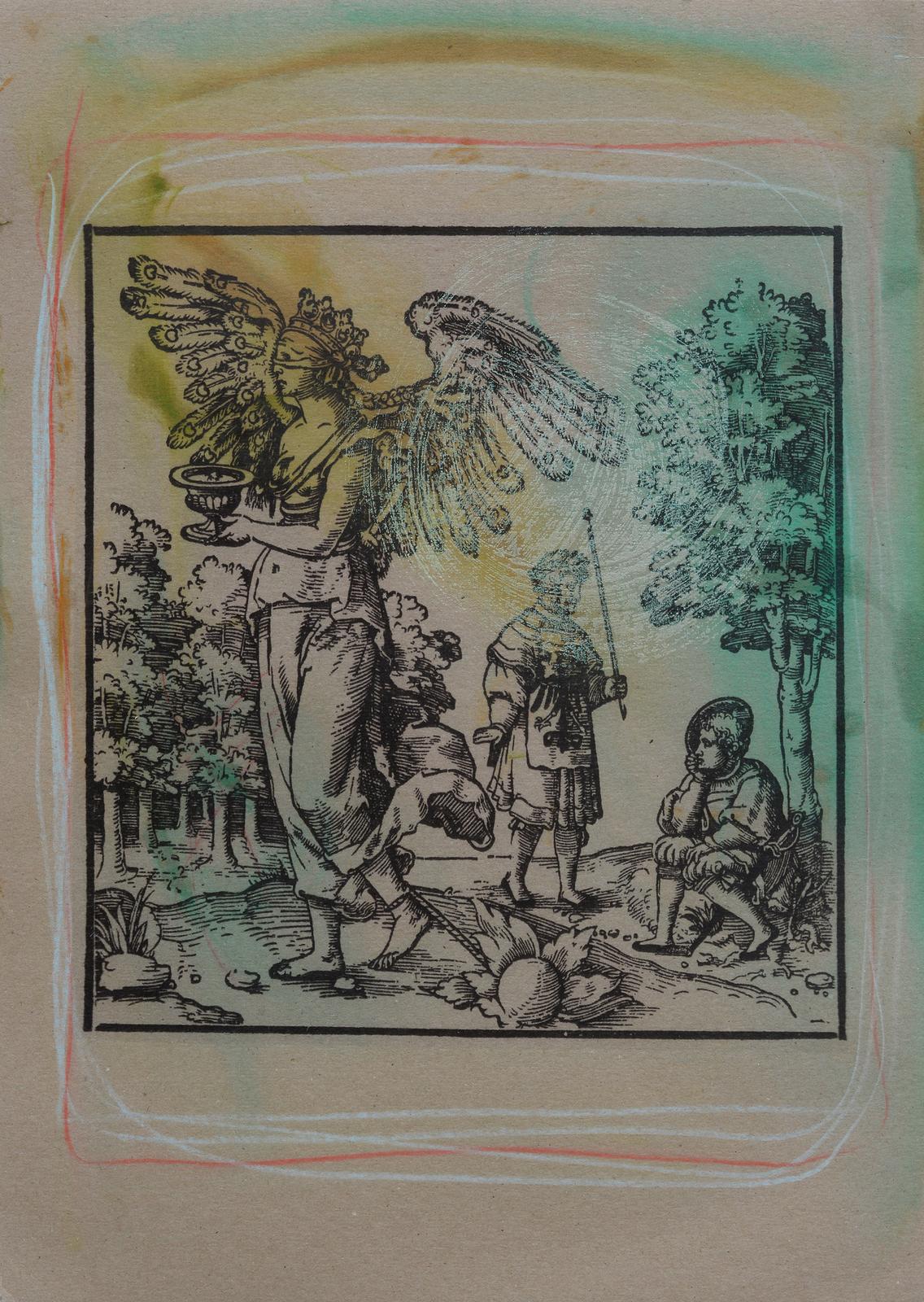 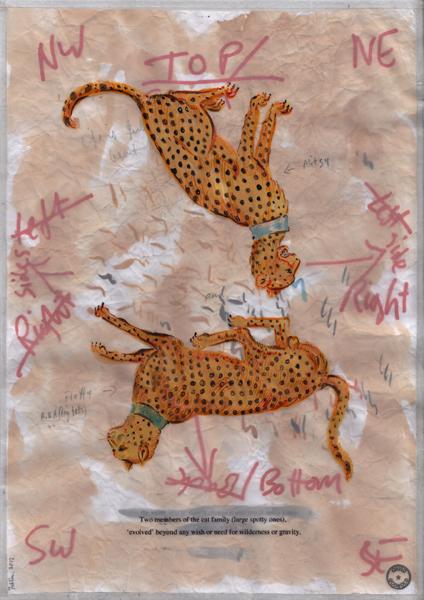 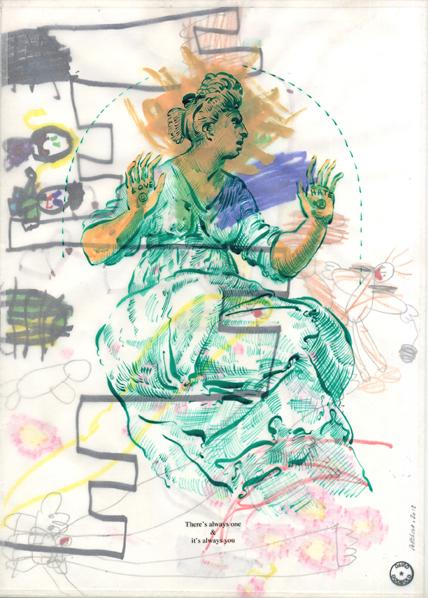 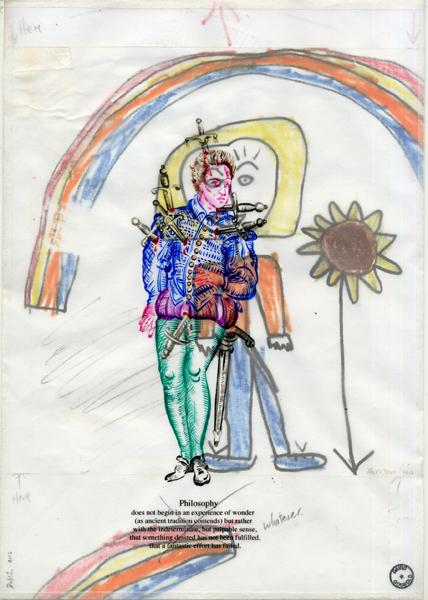 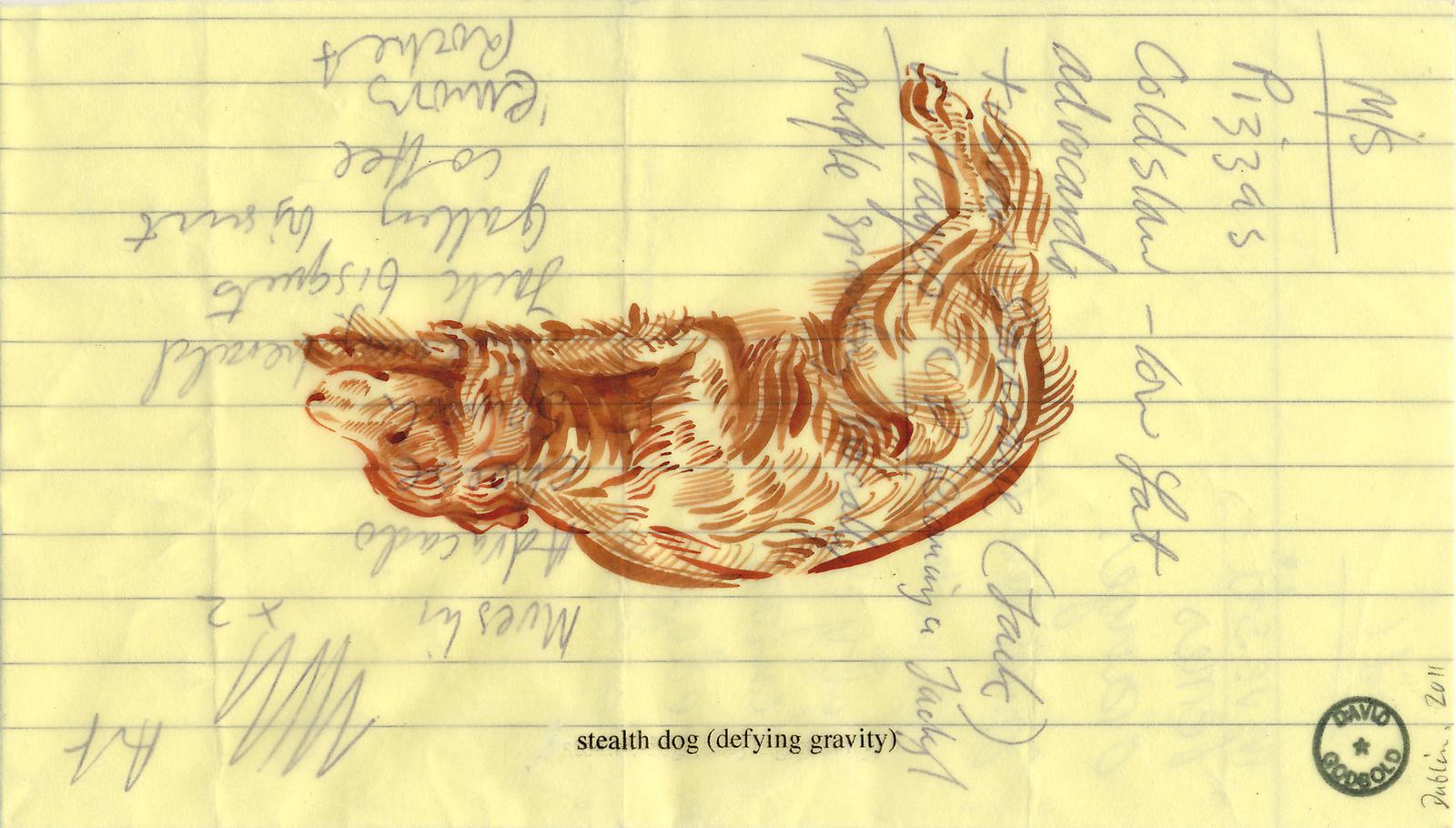 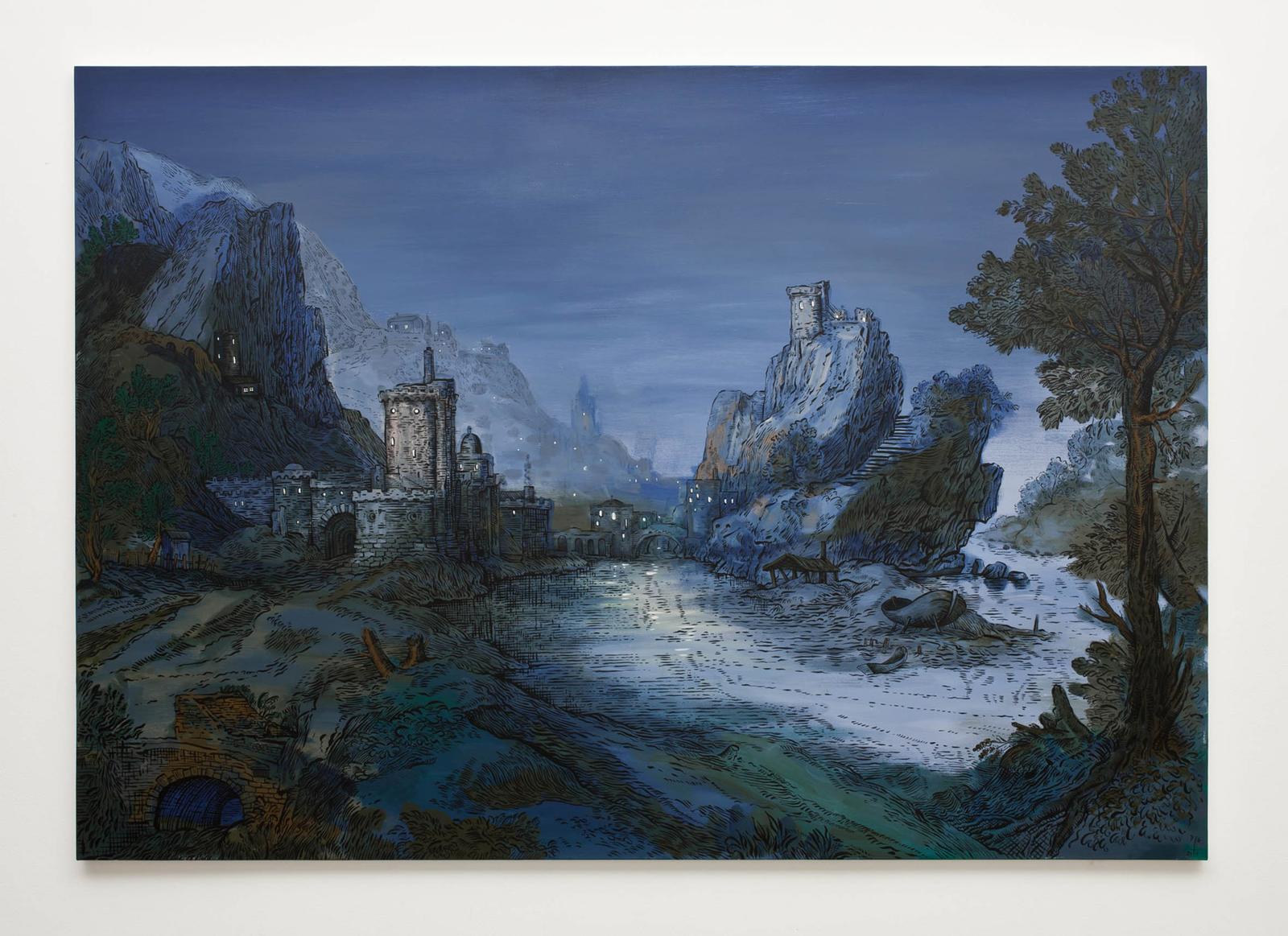 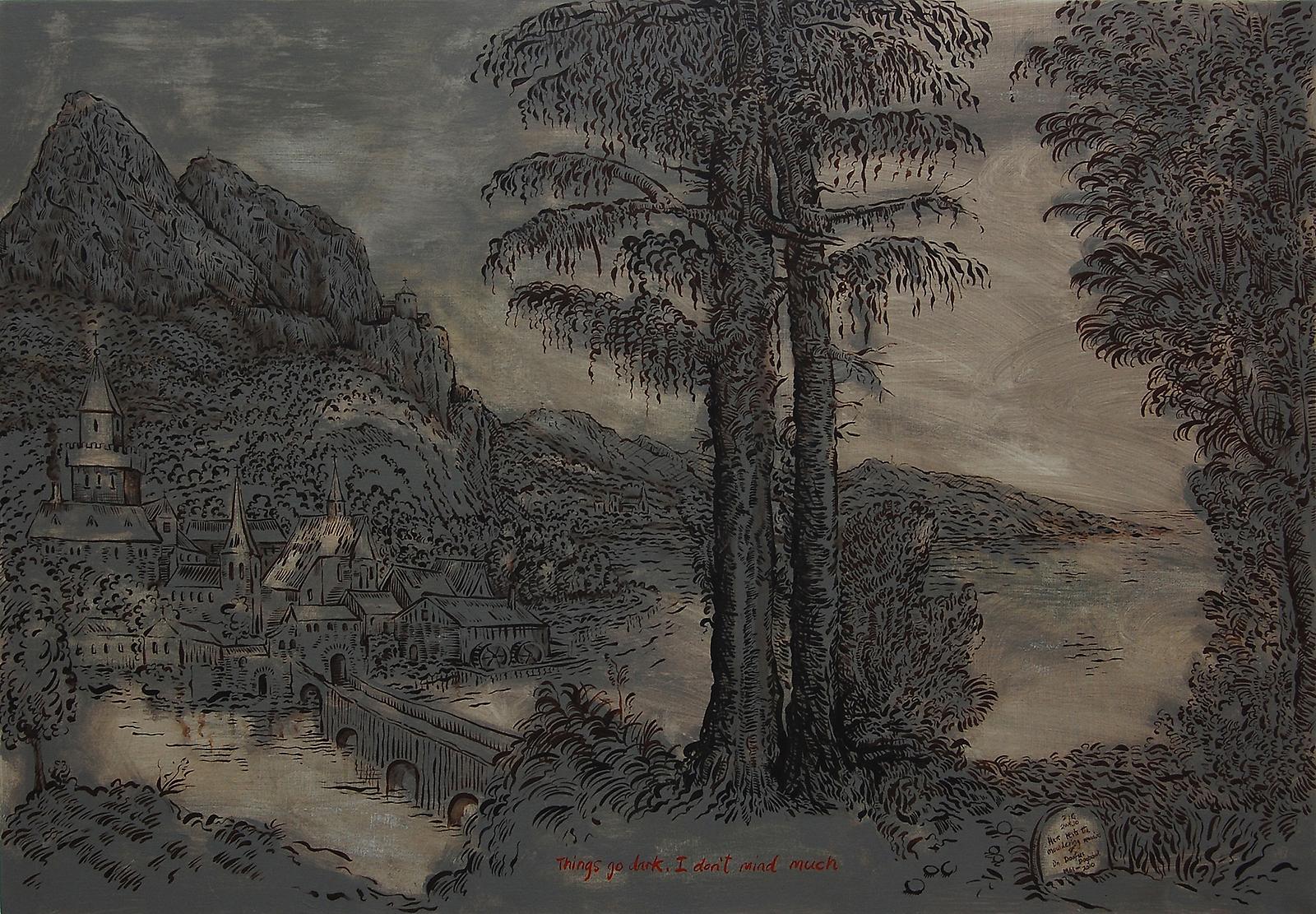 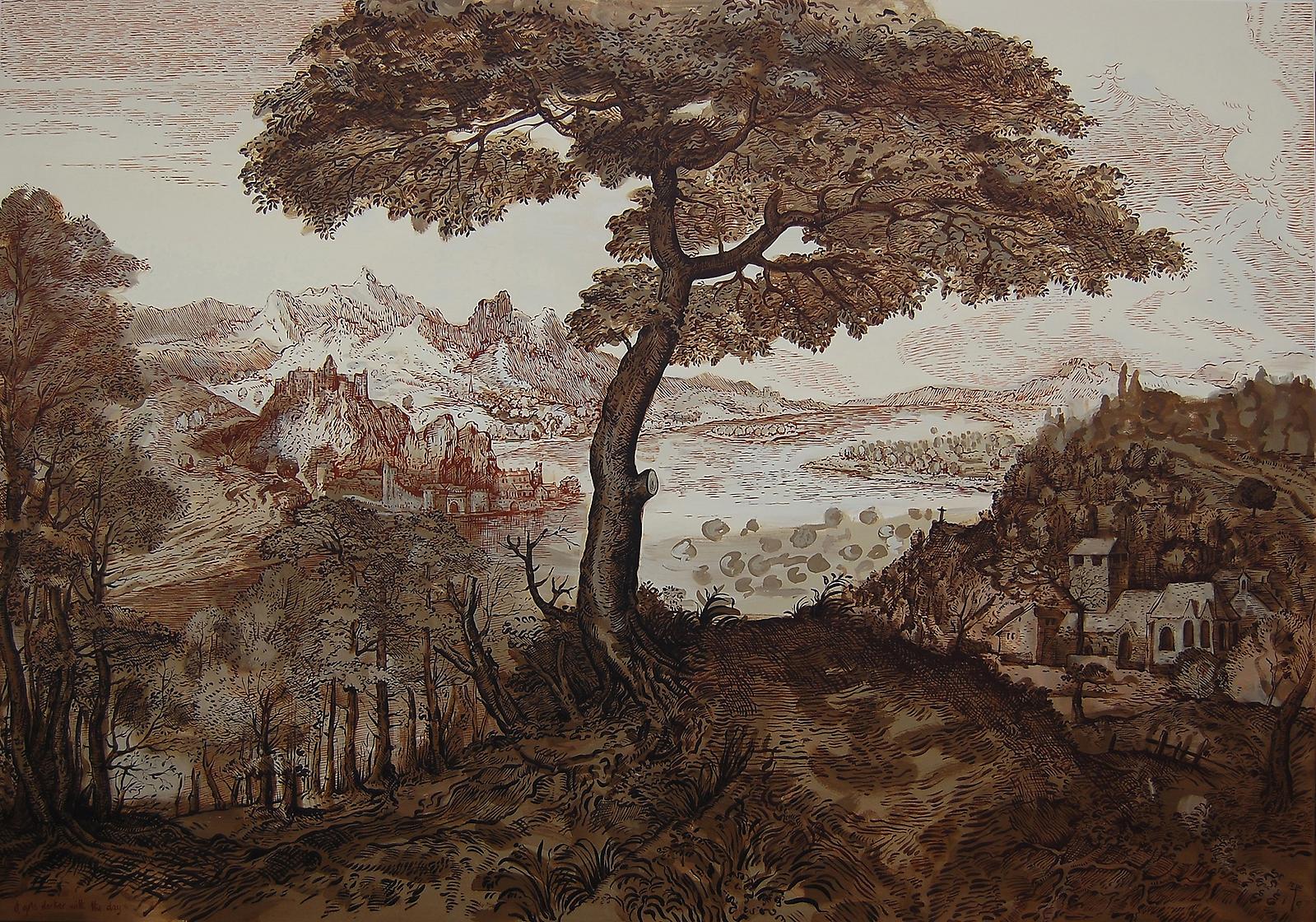 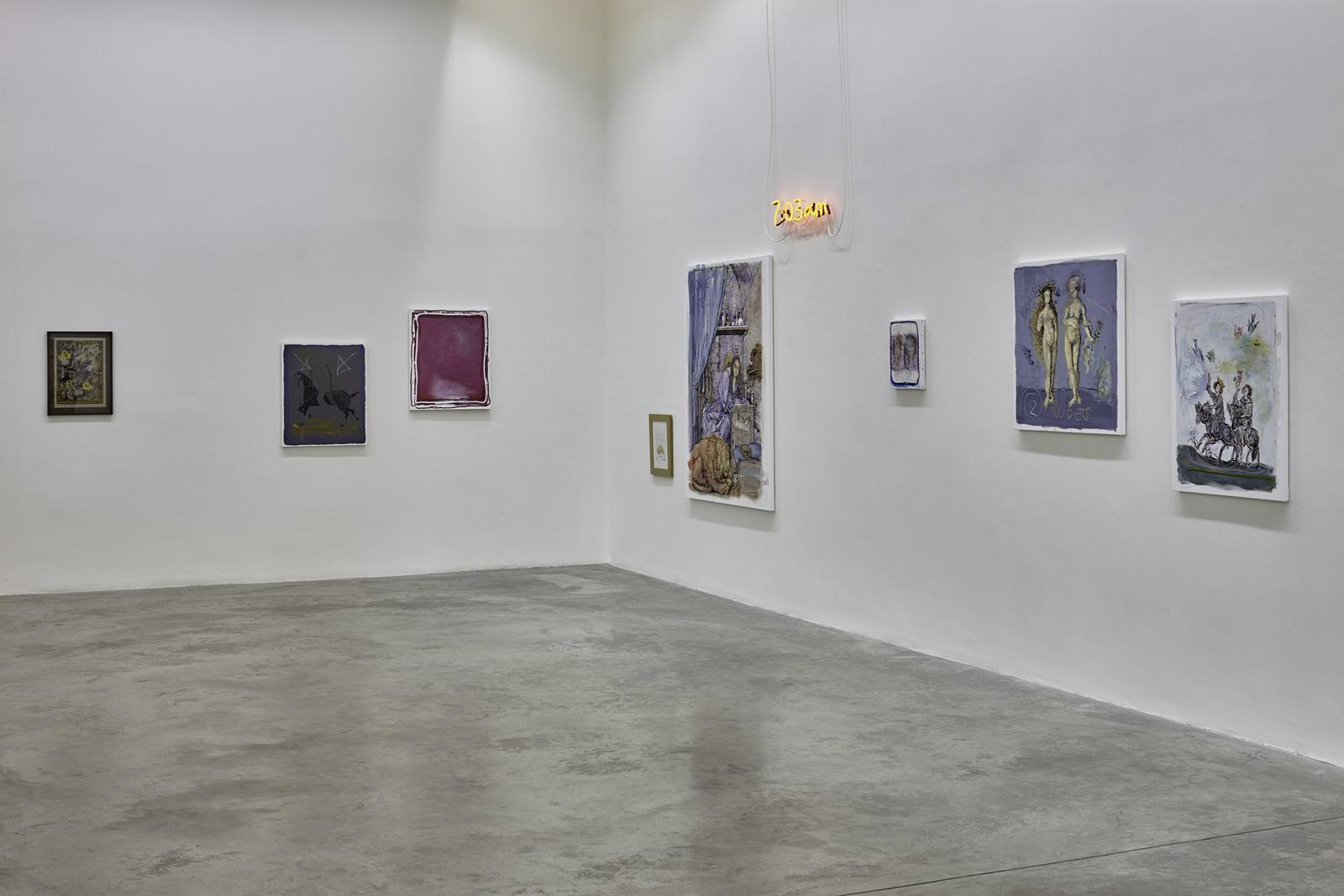 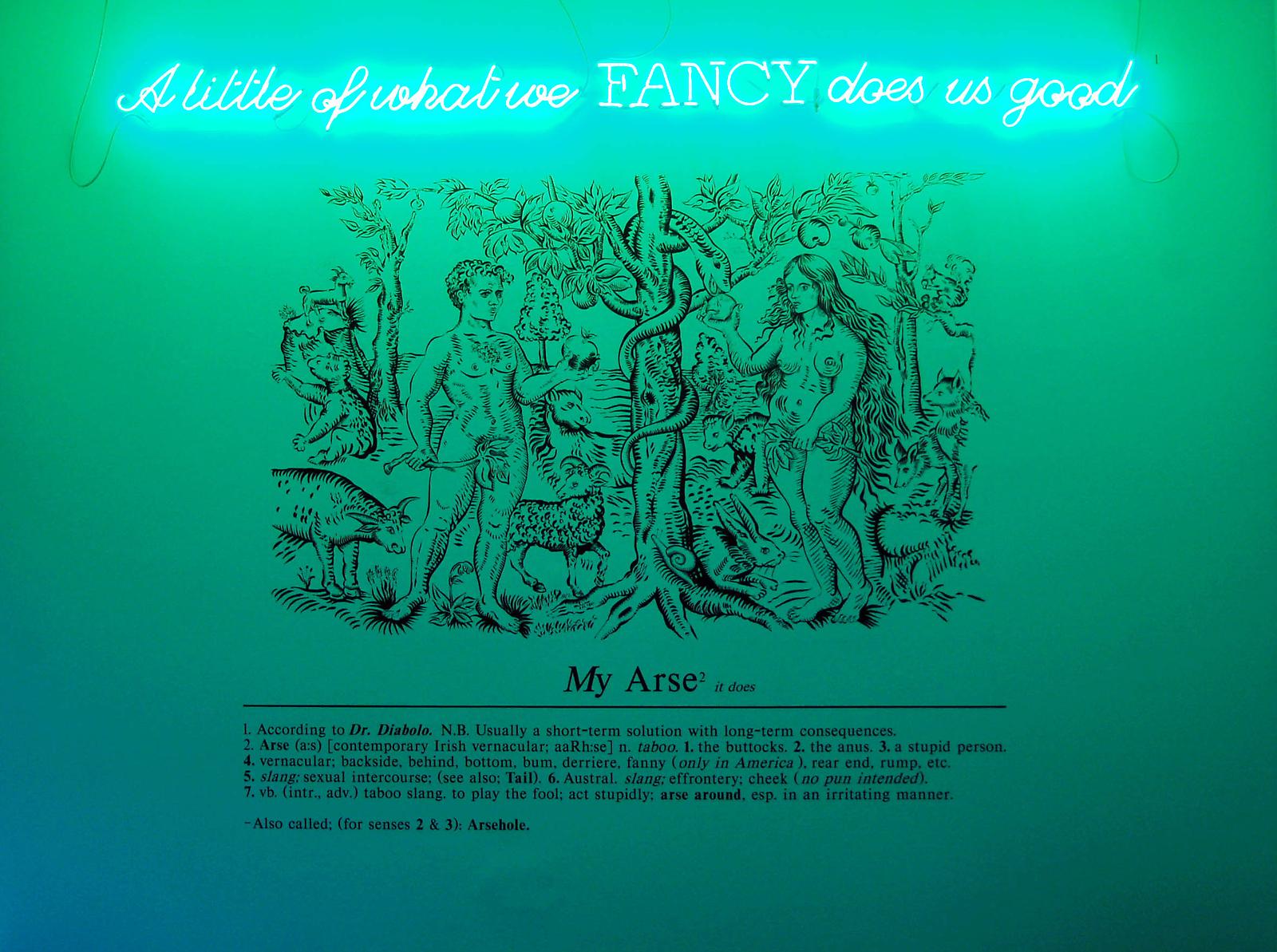 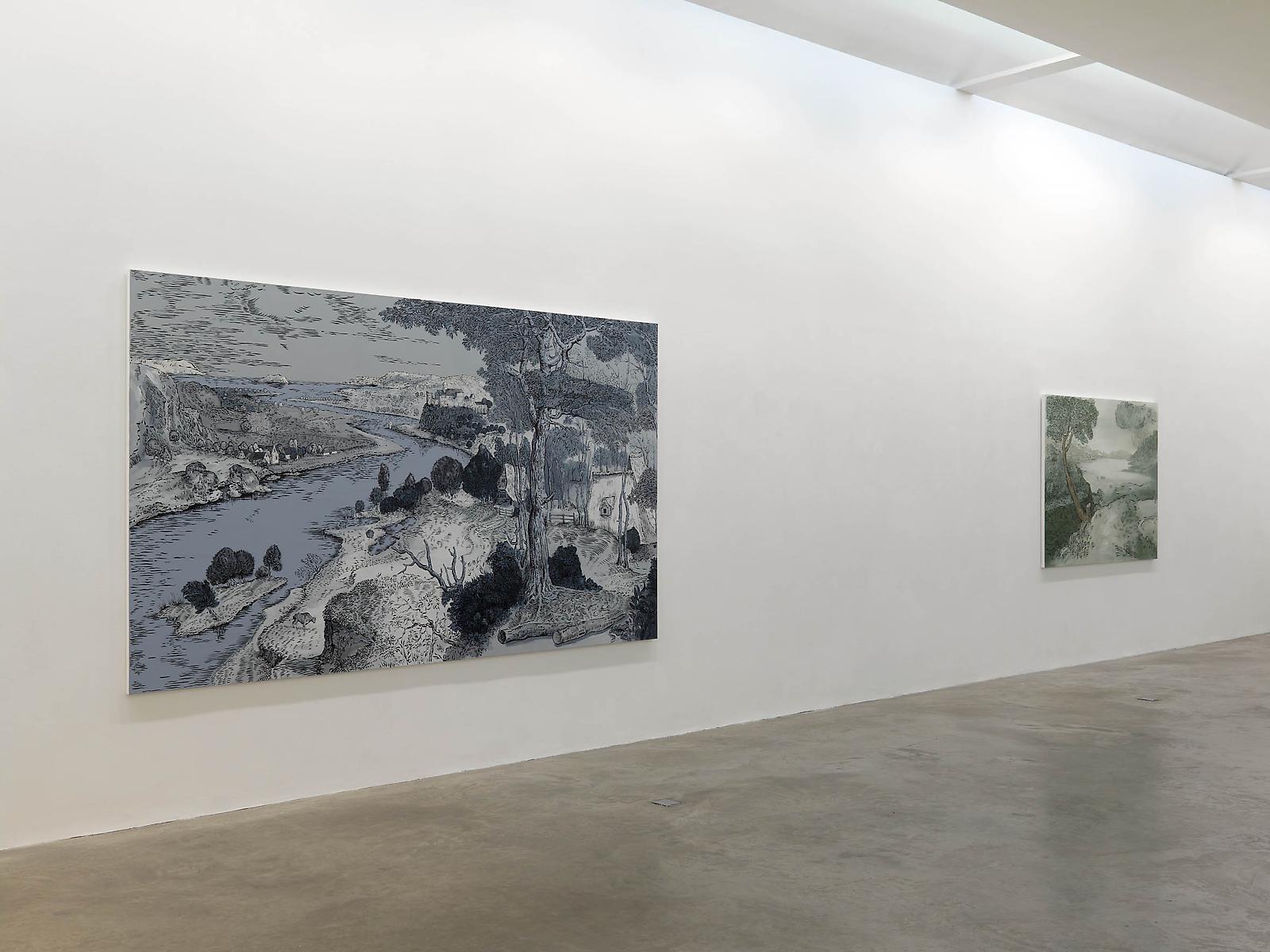 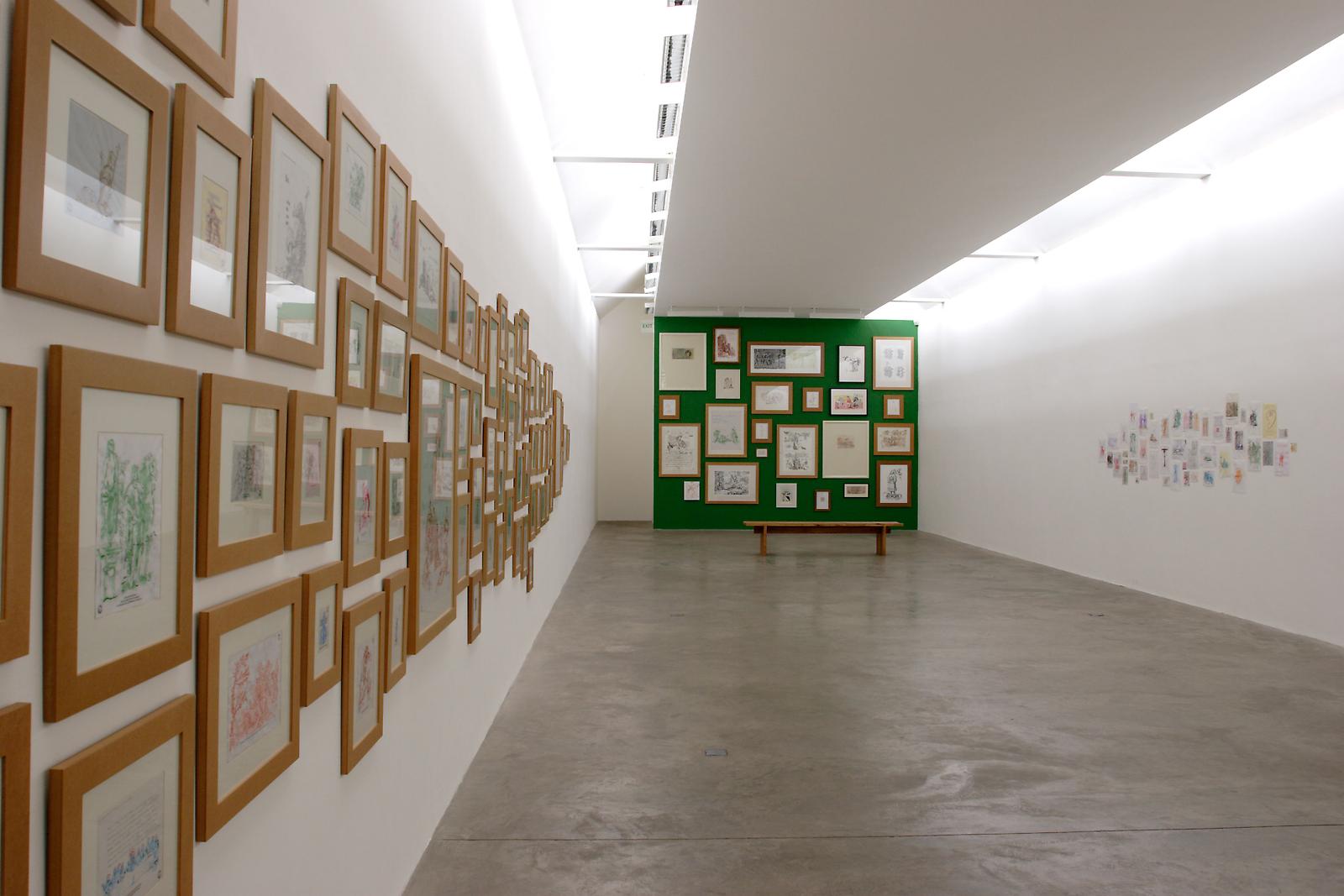 David Godbold
Once it was a lie, now it's the truth
Kerlin Gallery
14 January - 12 February 2005
Additional Views 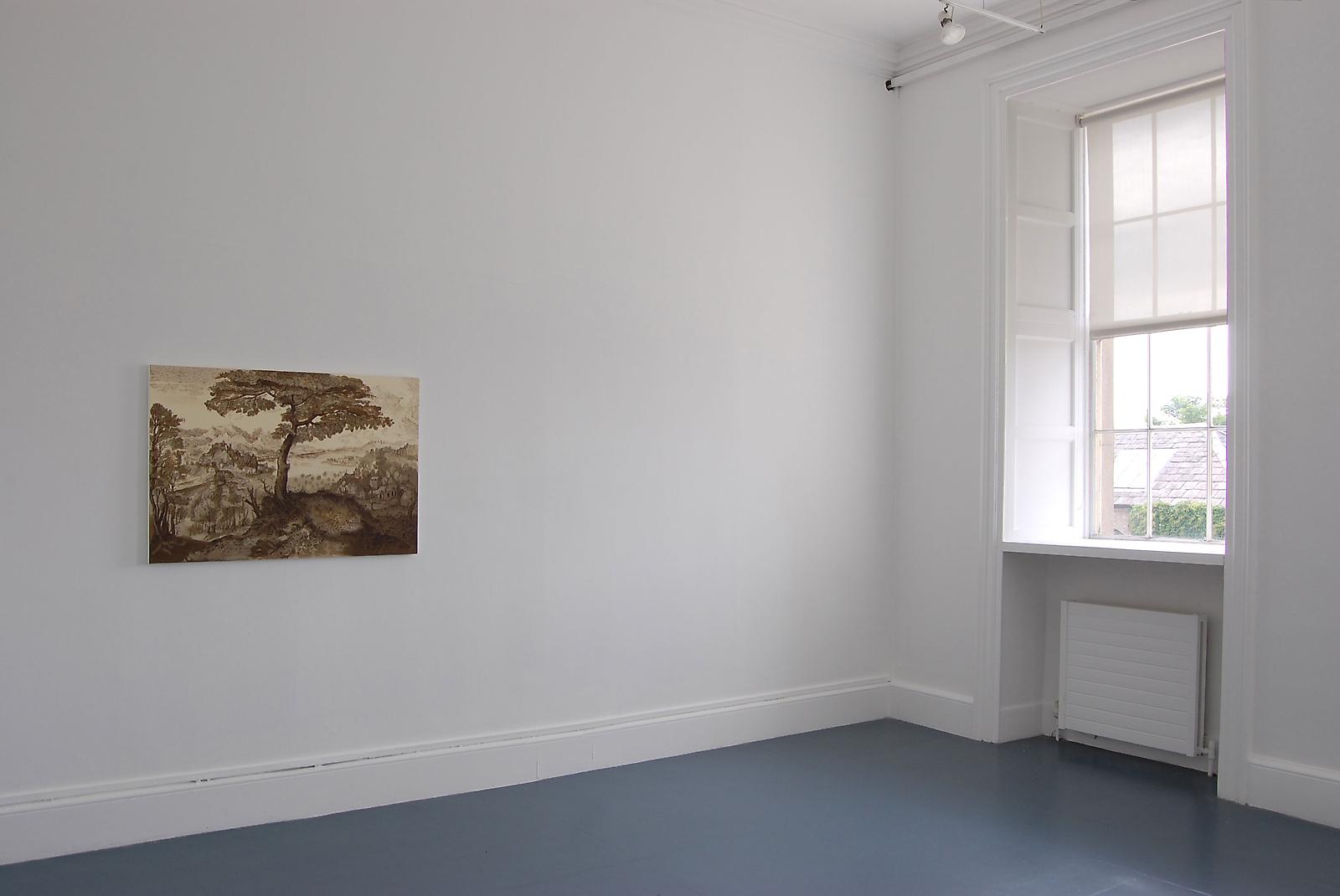 David Godbold
No thoughts
Process Room, IMMA
29 June to 12 July 2009
Additional Views
b. 1961, England.
David Godbold’s work has often concentrated on the production of visual imagery in high and low culture. Through drawing, painting and mixed media, his work offers a critical examination into the image-making process, alongside a semiotic, epistemological and personal investigation into culture and linear historicism.
Following a formative residency at PS1/MoMA, New York in 2000, Godbold began pairing classically articulated ink drawings with very contemporary, irreverent ‘captions’, forming image/texts – a practice that has remained at the core of his work. These works were often completed using found materials (discarded printed matter, old tickets and leaflets), then arranged into large-scale, scatter-hung agglomerations of caustic cartoons. Clashing past with present, highbrow with lowbrow, Godbold’s best-known work bridges old master painting with contemporary, populist forms of media such as political cartoons, comics, children’s colouring books and illustrator’s compendiums.
Having moved to Ireland at the beginning of the 1990s, the legacy of European colonialism has also been a particularly pressing concern for this much-travelled Englishman, who has lived for long stretches in Australia and the US. In 2005 Godbold was controversially selected to officially document the recent UK parliamentary elections in a series of drawings for the permanent collection of the House of Commons.
Recent exhibitions include: A Visual Odyssey, Jing Gallery, Beijing (2015); Things Go Dark, The Model, Sligo; Zeichen. Sprache. Bilder, Städtische Galerie, Karlsruhe (2014); Von der Heydt Museum, Germany (2011); Dublin Contemporary (2011); the Irish Museum of Modern Art (2011, 2009); Barbican Centre, London (2010) and Lots of Things Like This, curated by David Eggers, at apexart, New York (2008).
Godbold’s work is represented in the collections of Trinity College, Dublin; the Irish Museum of Modern Art; City Bank, New York, and numerous other public and private collections worldwide.
Download PDF

Solo exhibition including a major new wall painting, works with neon and over 120 framed drawings.

David Godbold will discuss his exhibition More like living than life itself with critic and lecturer Dr Caoimhín Mac Giolla Léith on Saturday, 12 September 2015 at 2:30pm.

The Office of Public Works will present an exhibition 'Meditation on Plates: Inspired by Lord Charlemont's Casino' in one of Ireland's most highly regarded historic buildings, the Casino at Marino, Dublin.


A group of almost 40 esteemed Irish and international artists, designers and architects was invited to respond to the Casino building, some of its ornamental elements or surroundings in a personal drawing. The artists' drawings have been transferred onto porcelain plates and reproduced in a limited edition of 18 plates per artist. The resulting collection is rich in its variety of interpretations and the quality and  beauty of the work.

Things go Dark presents a visual exploration of the principles of aestheticism through the work of nine contemporary Irish artists. The paintings in this exhibition lure the viewer into a world of beauty, fear, tension, dark comedy and suspense. Working in various pictorial languages these artists invoke an intense emotional response that demands to be put into sensible form, while at the same time overwhelming all attempts to do so. Their work explores the possibility of a space of immediacy, which remains outside the workings of power and history.