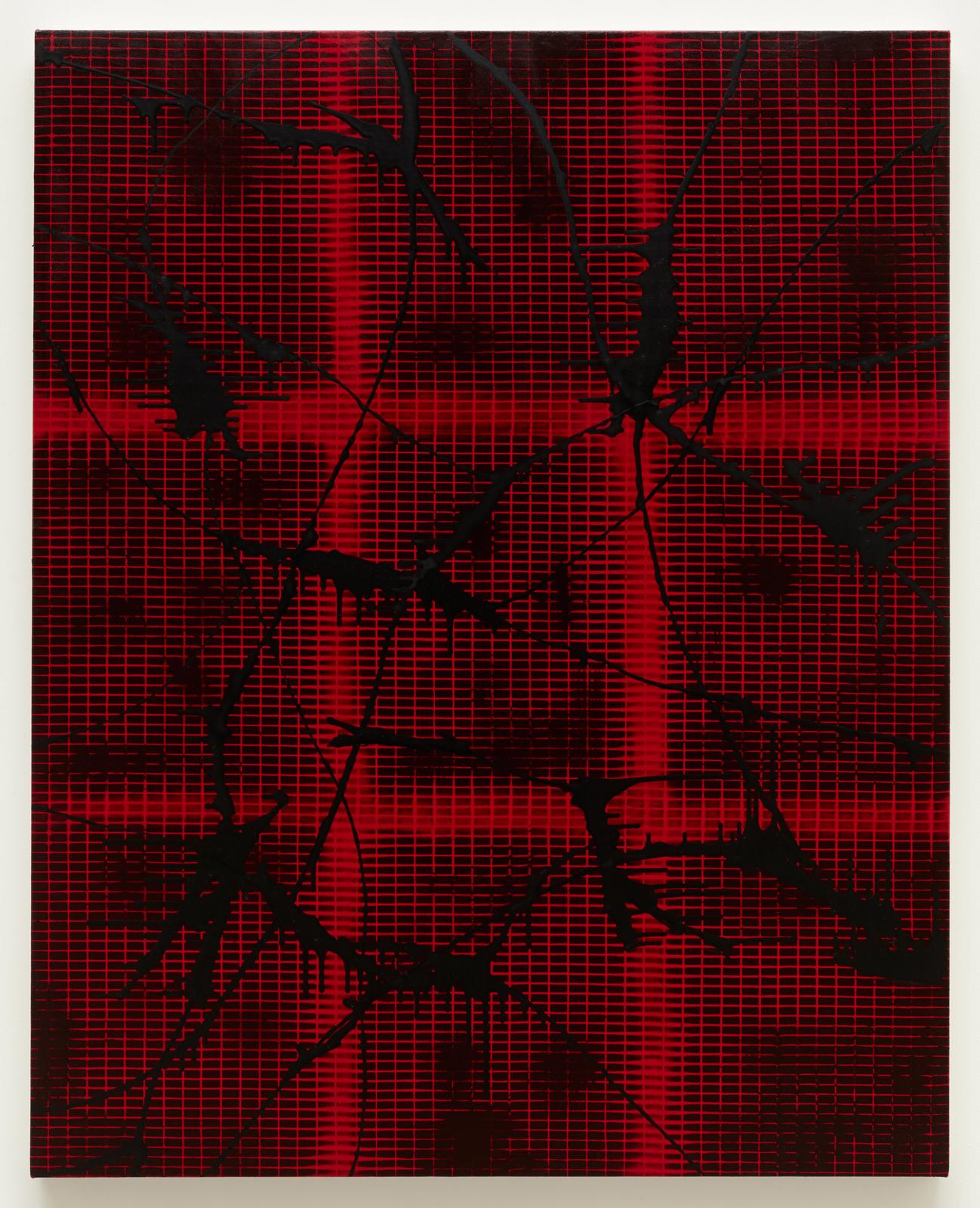 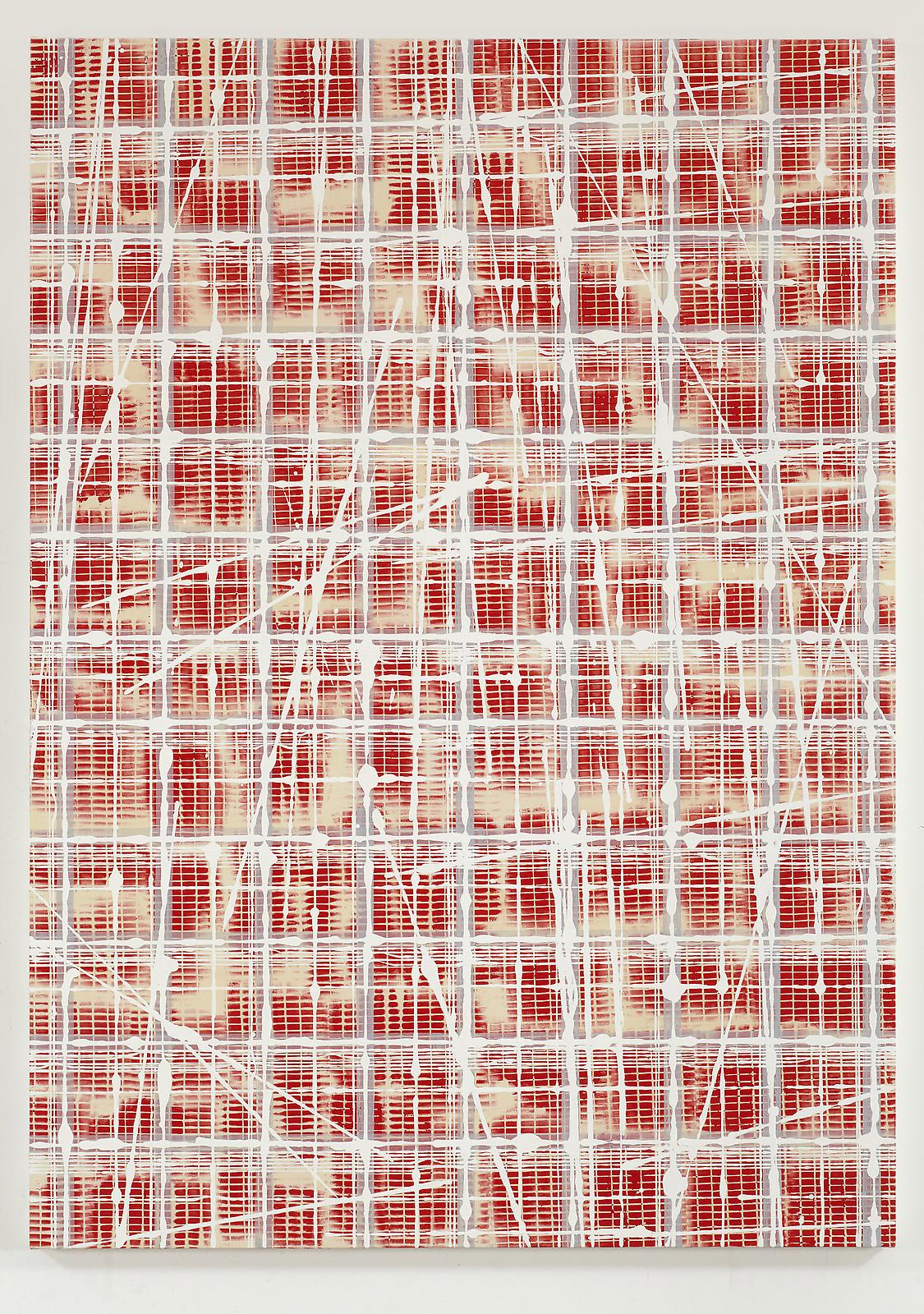 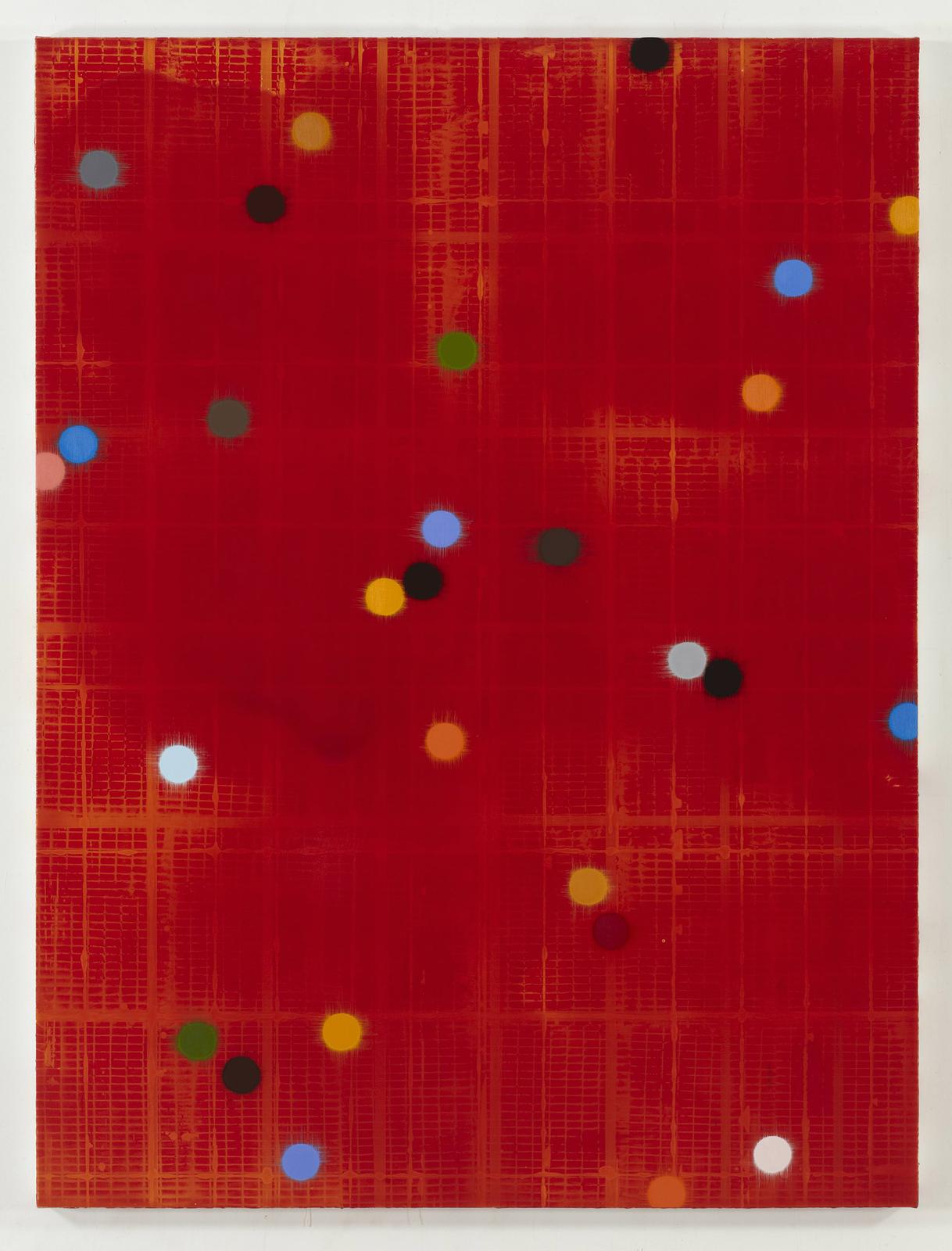 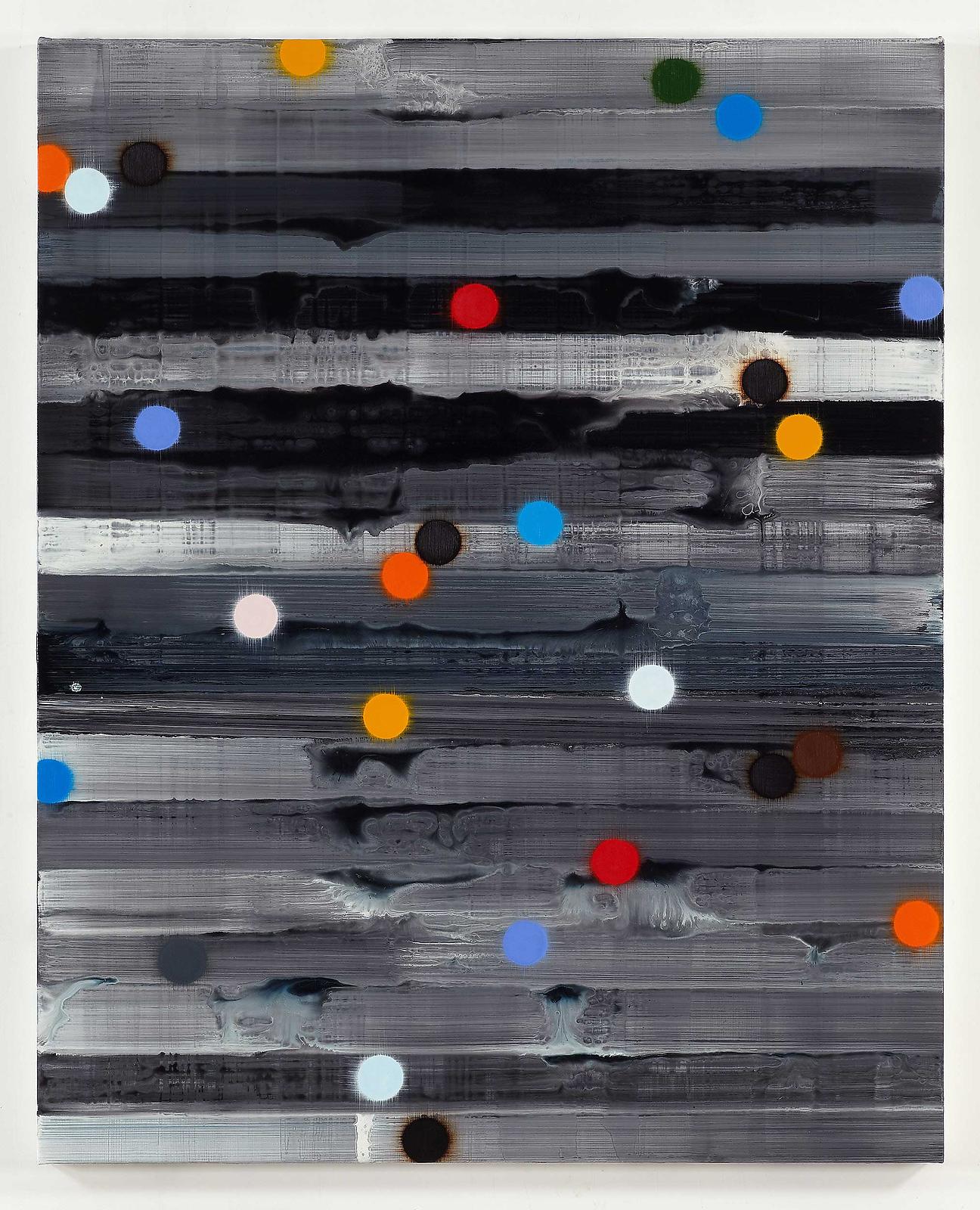 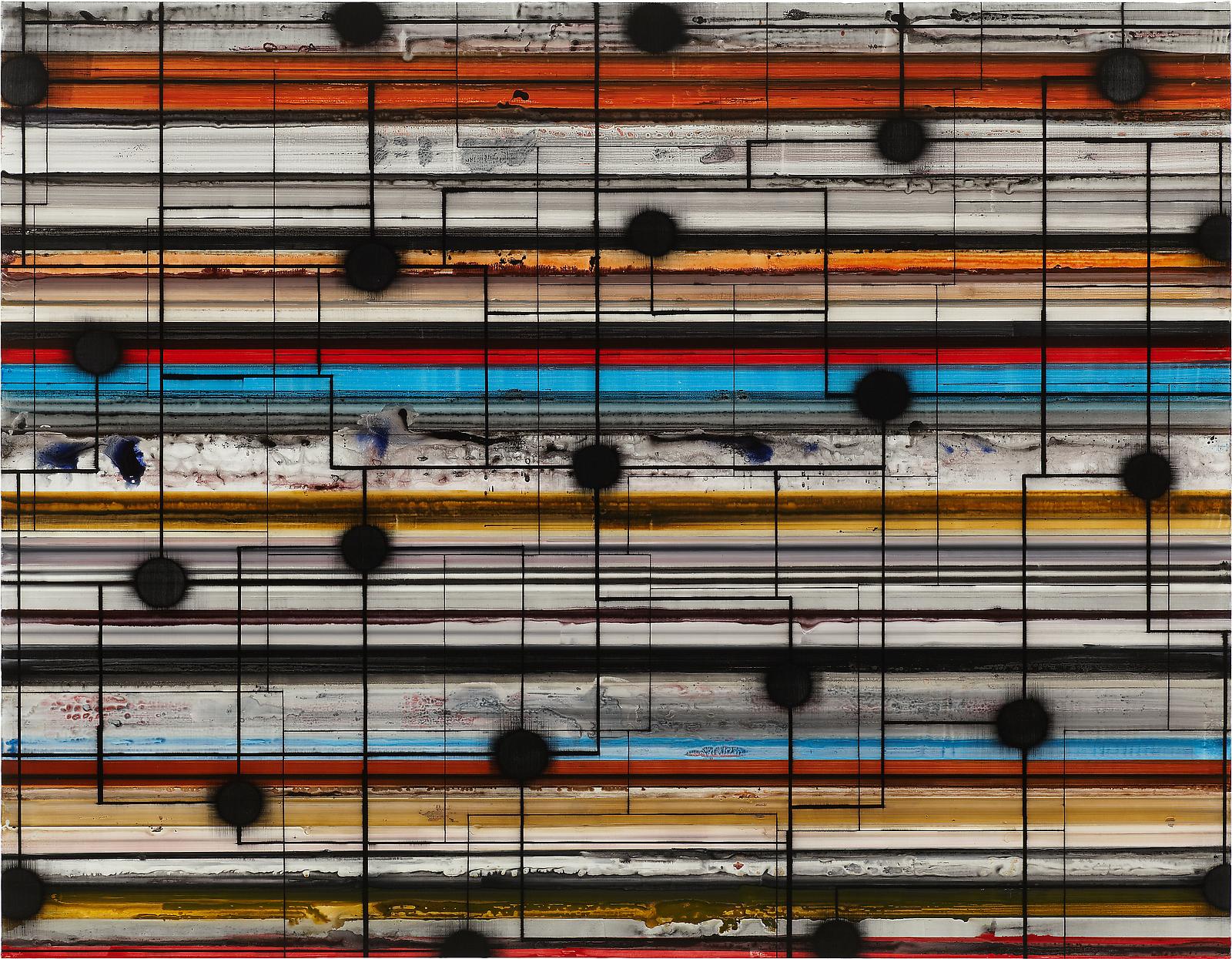 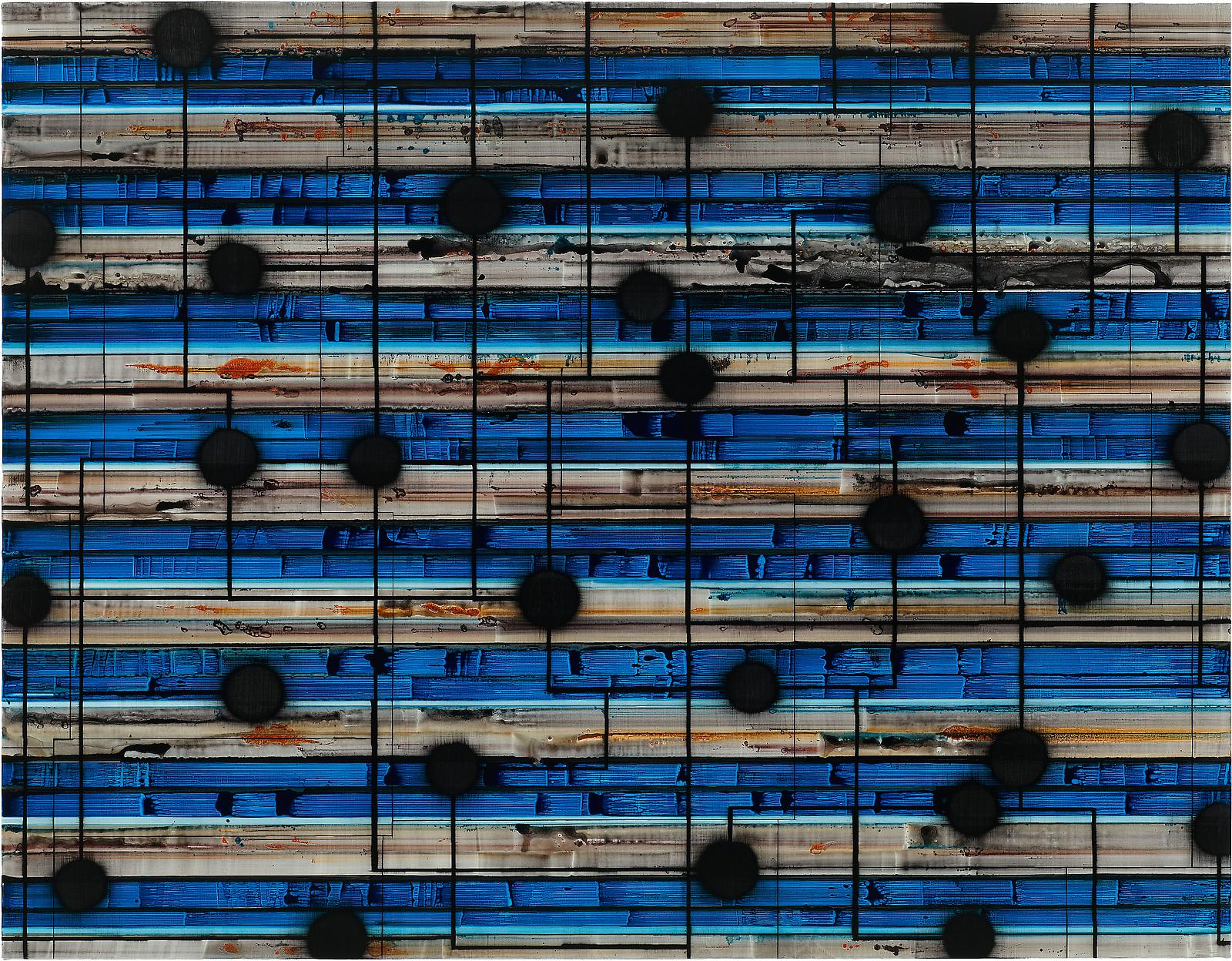 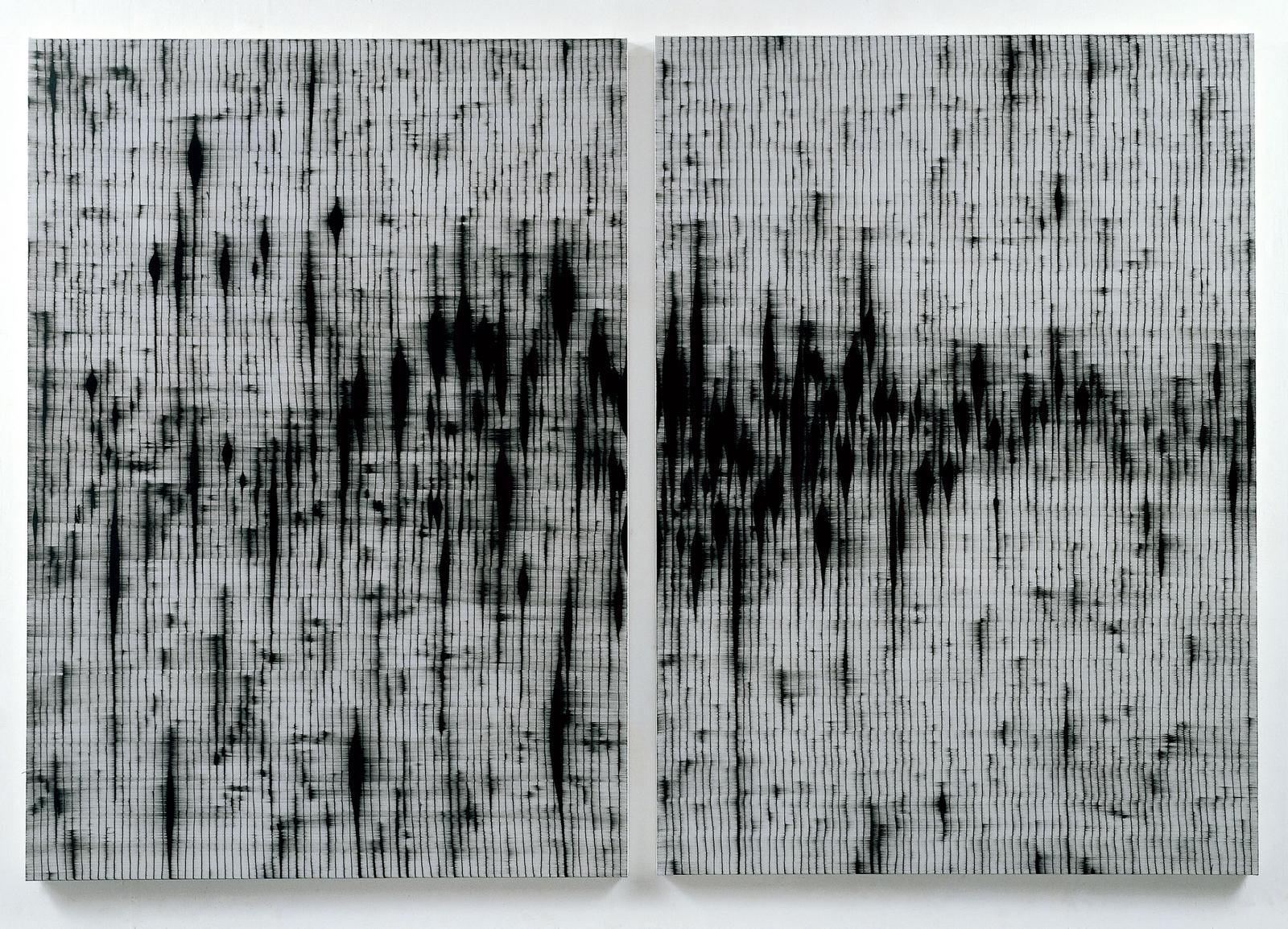 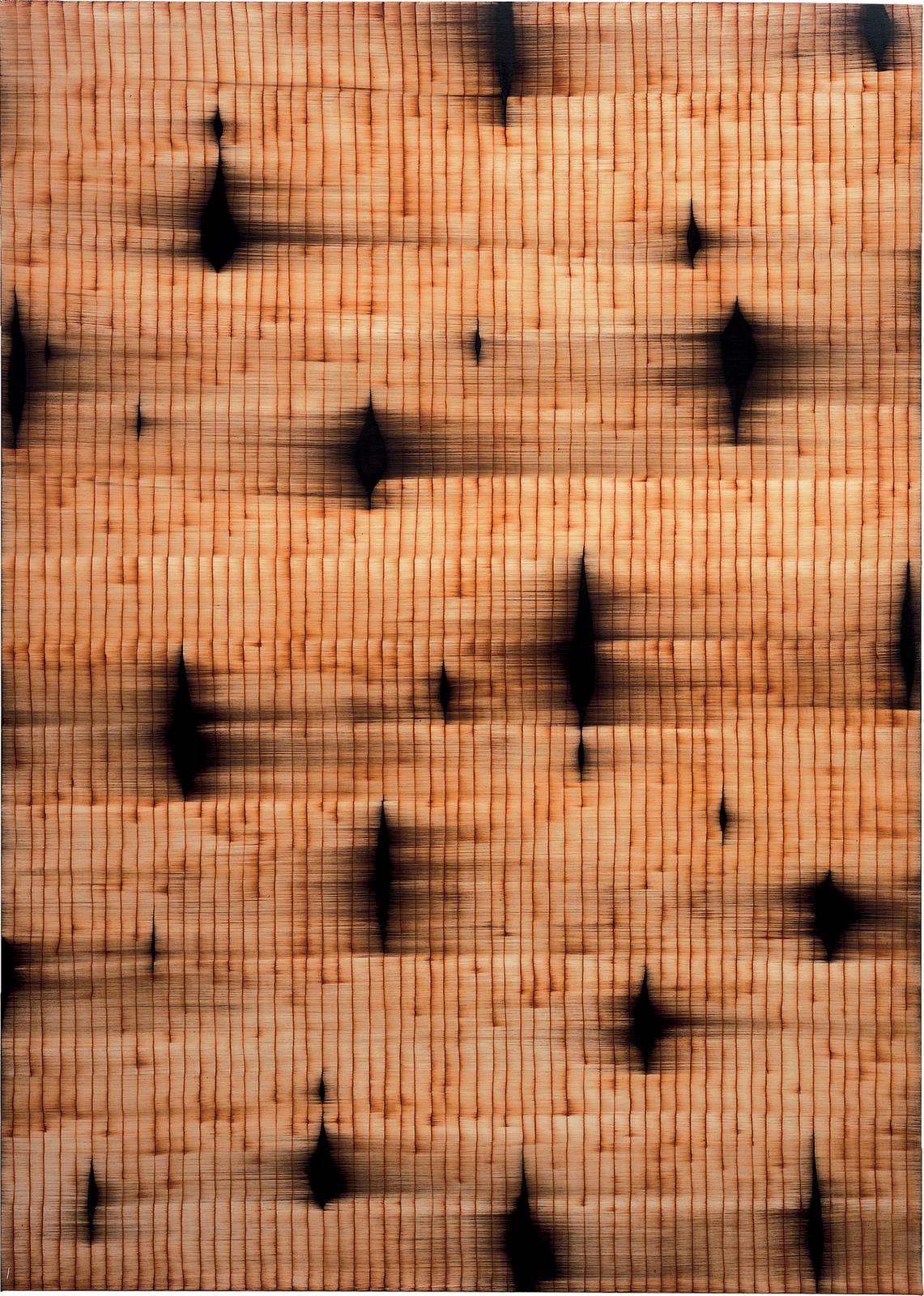 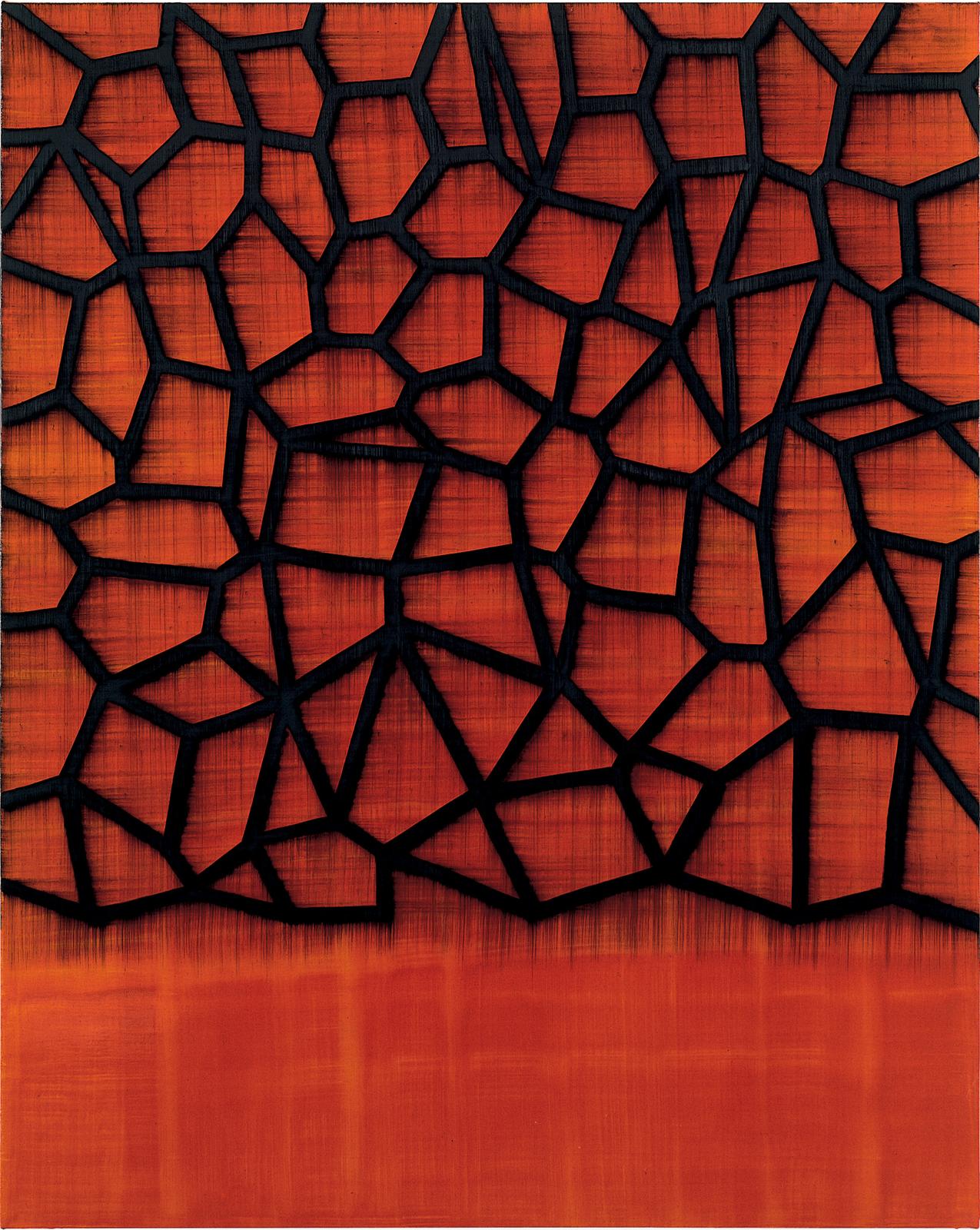 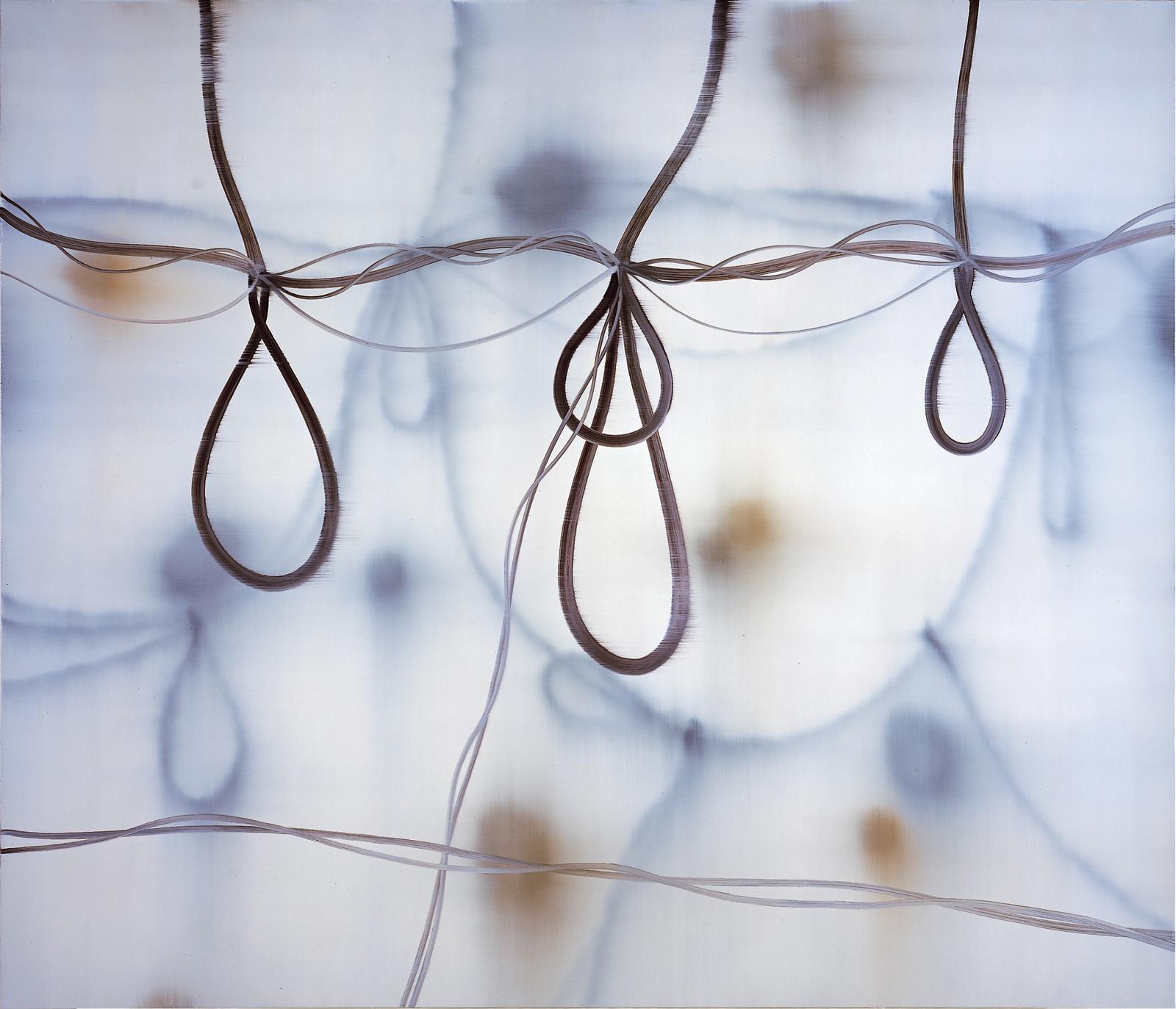 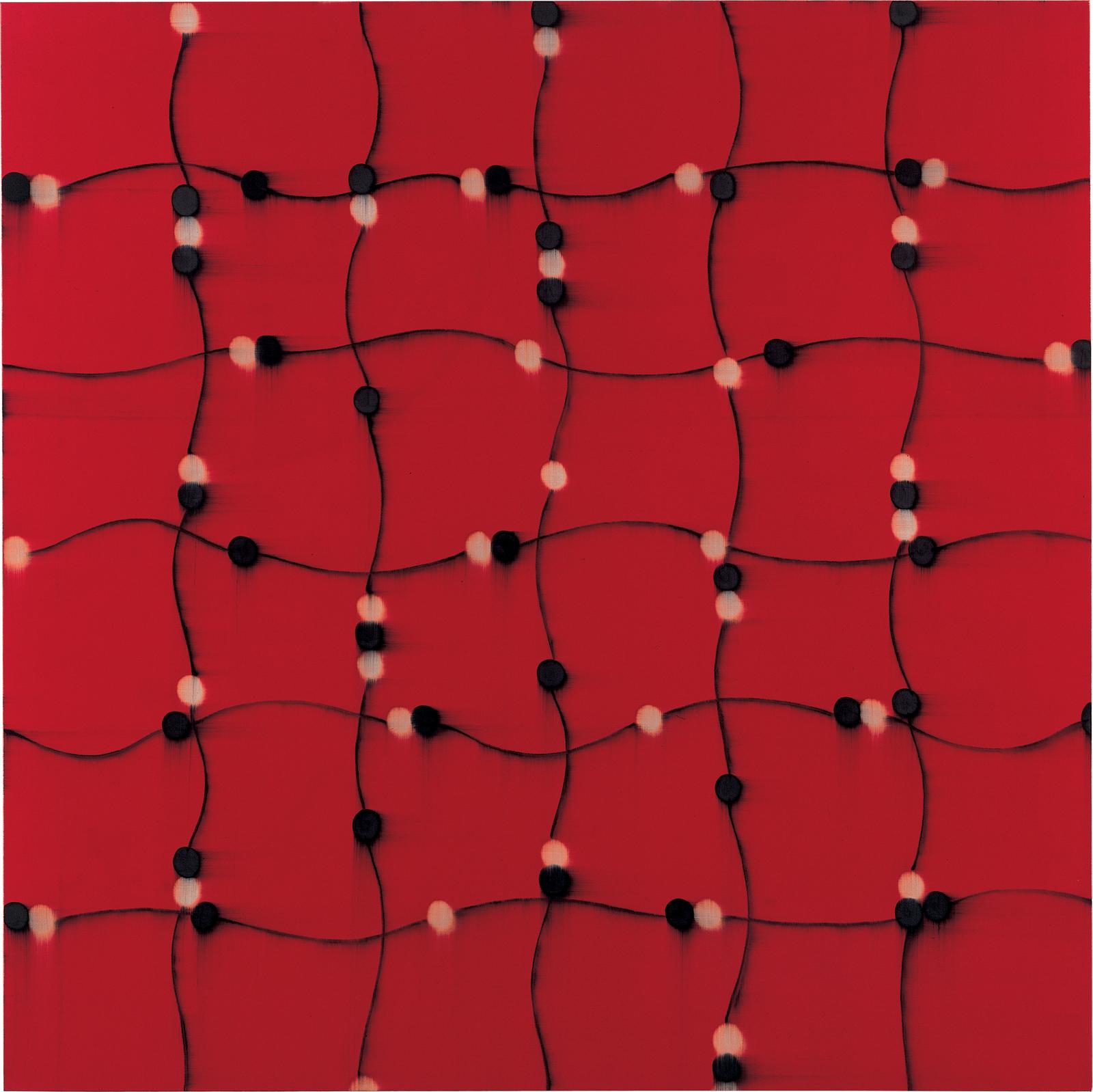 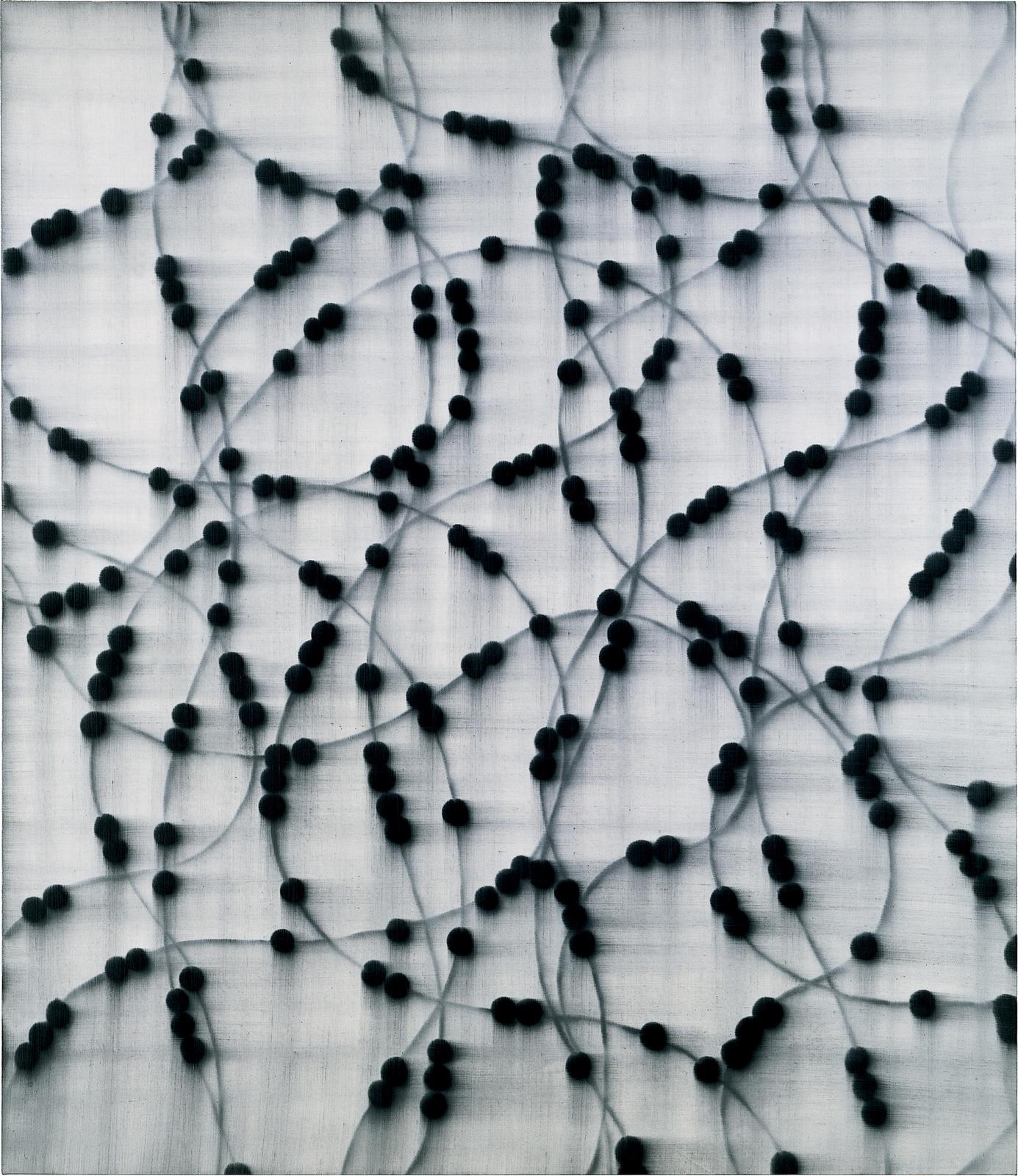 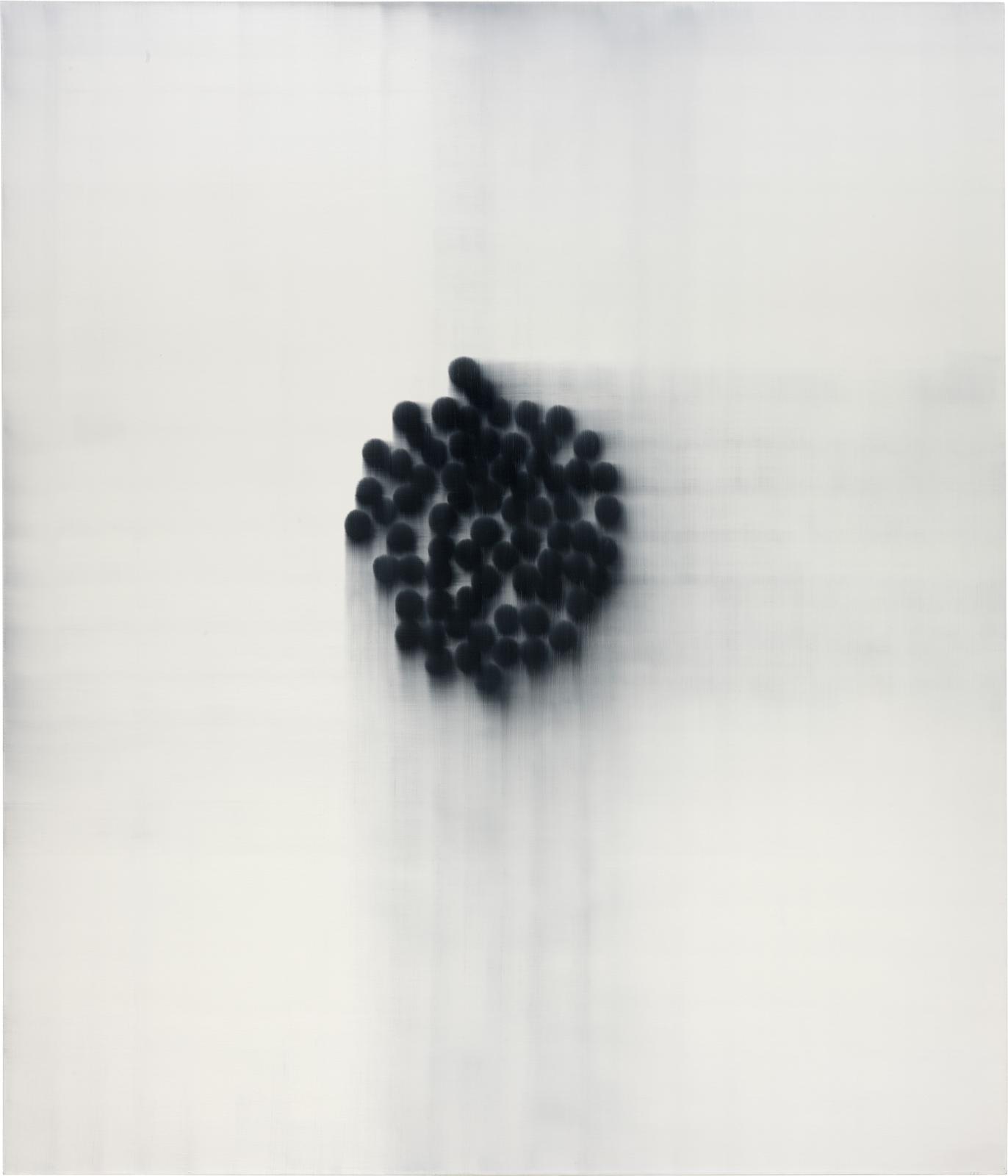 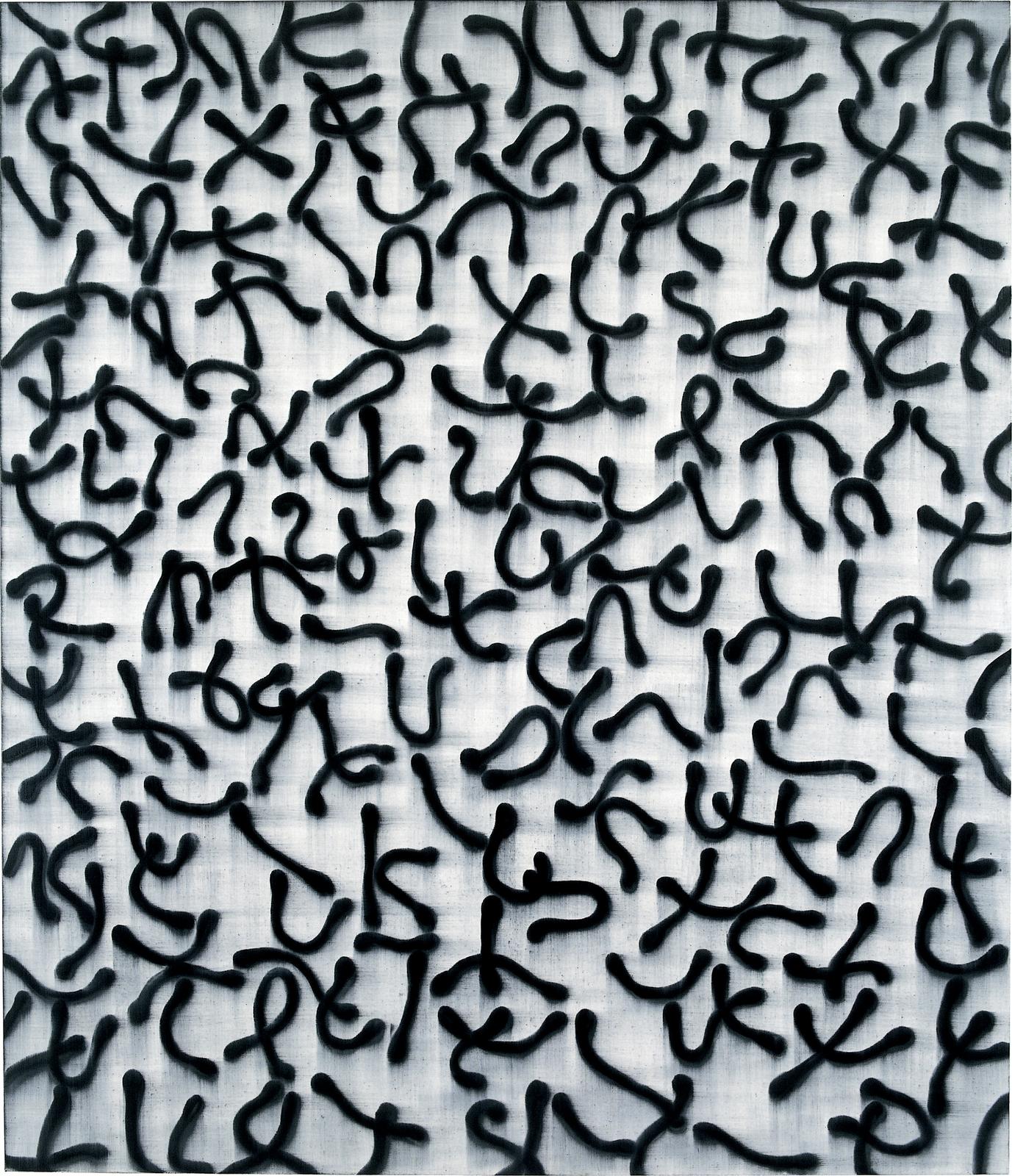 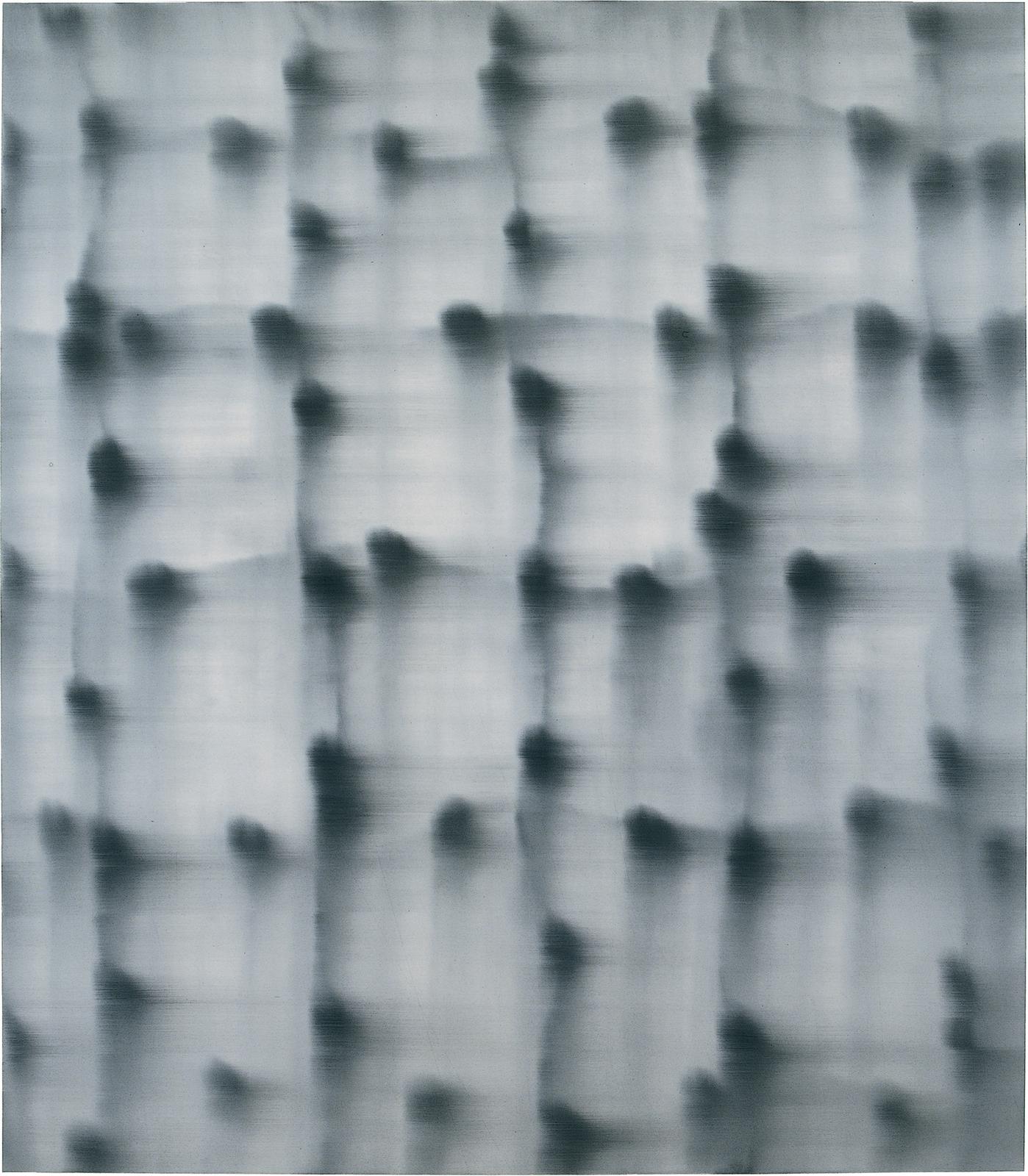 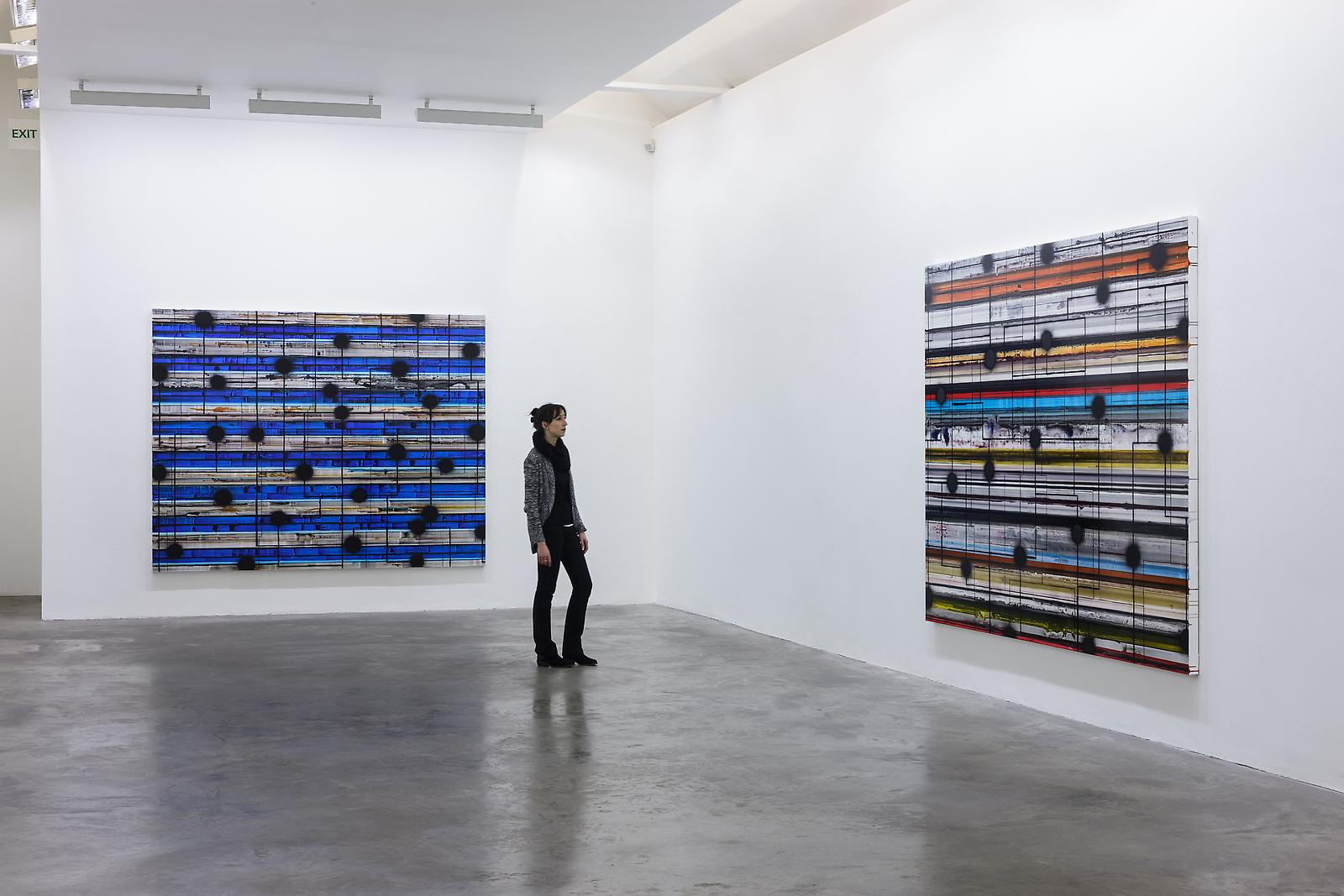 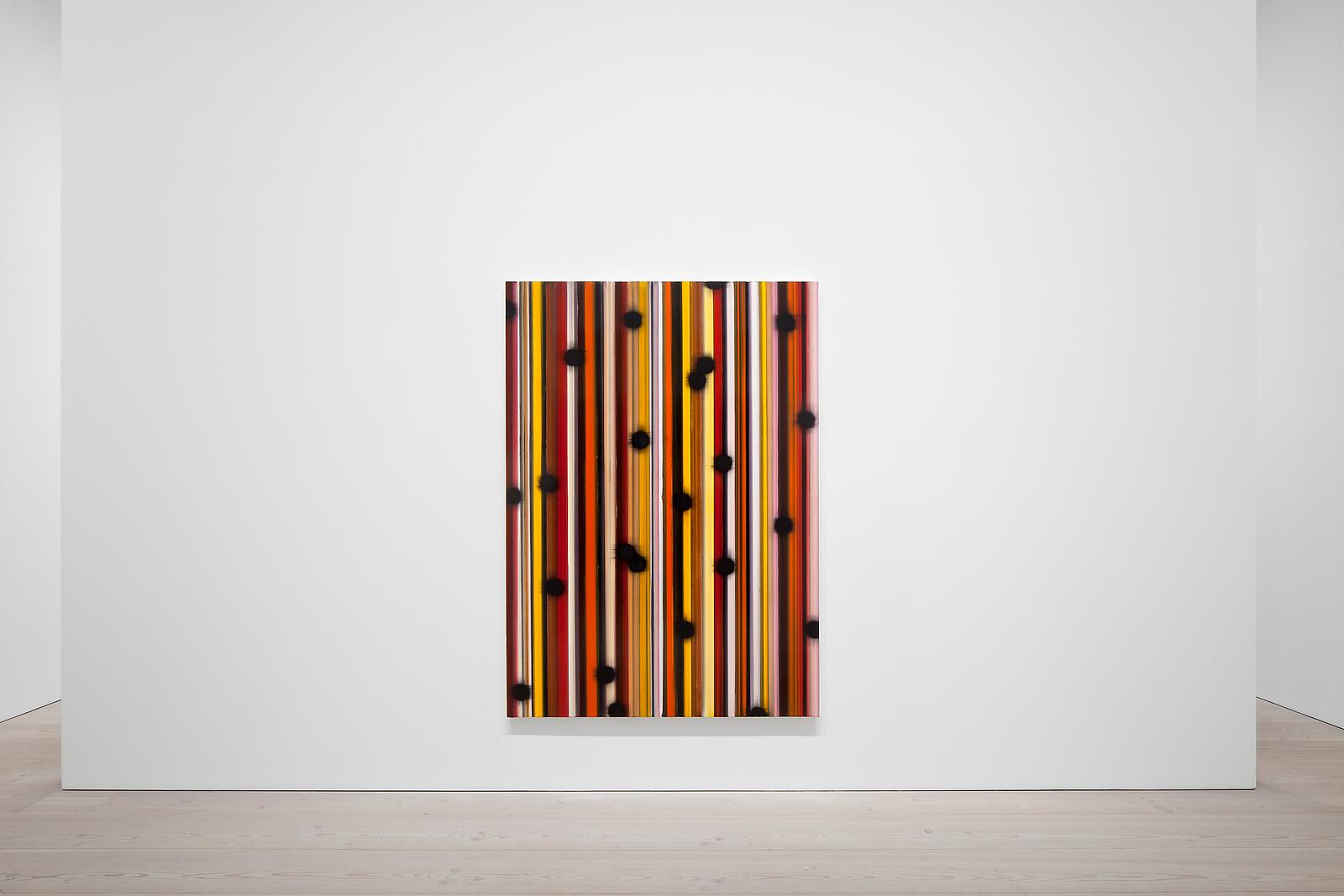 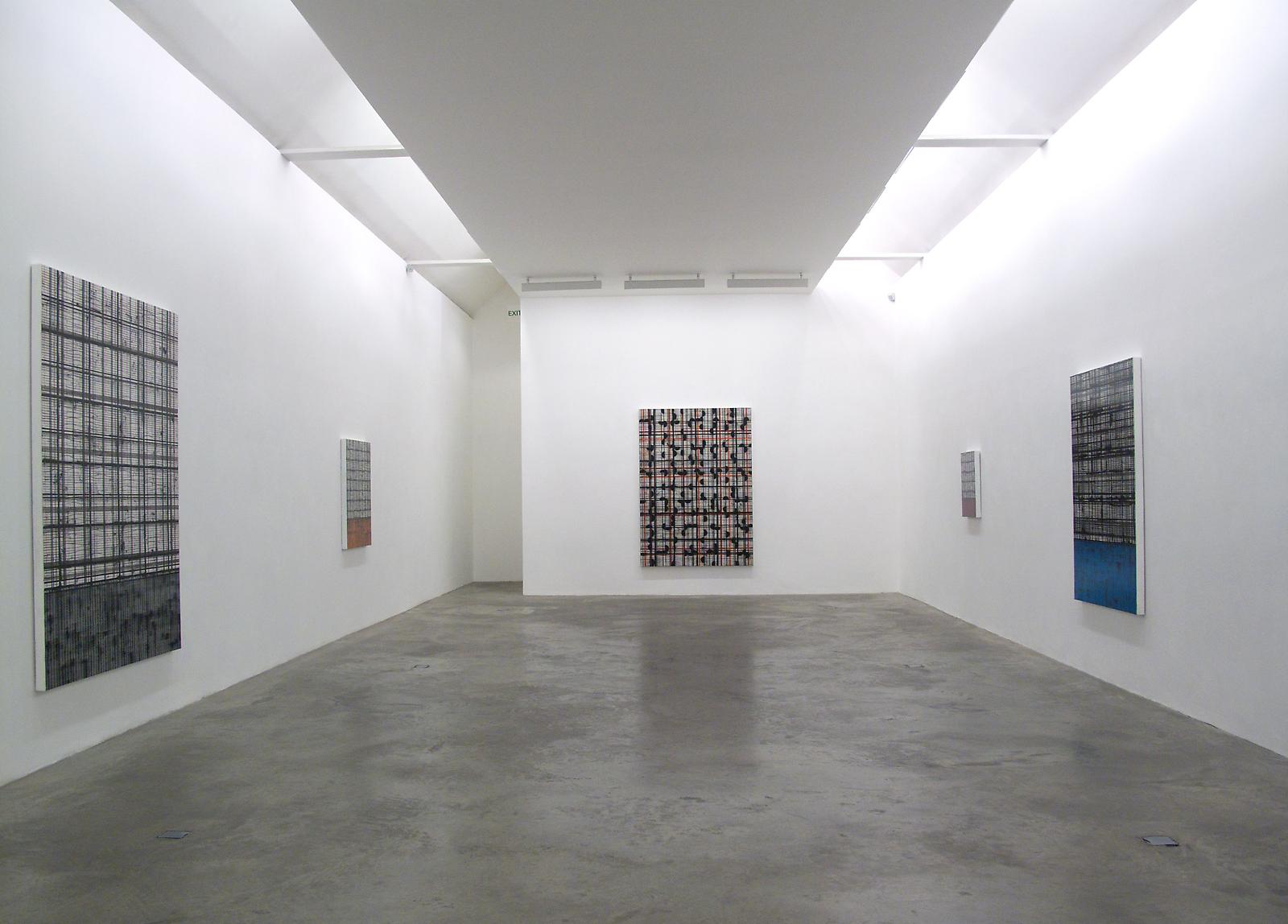 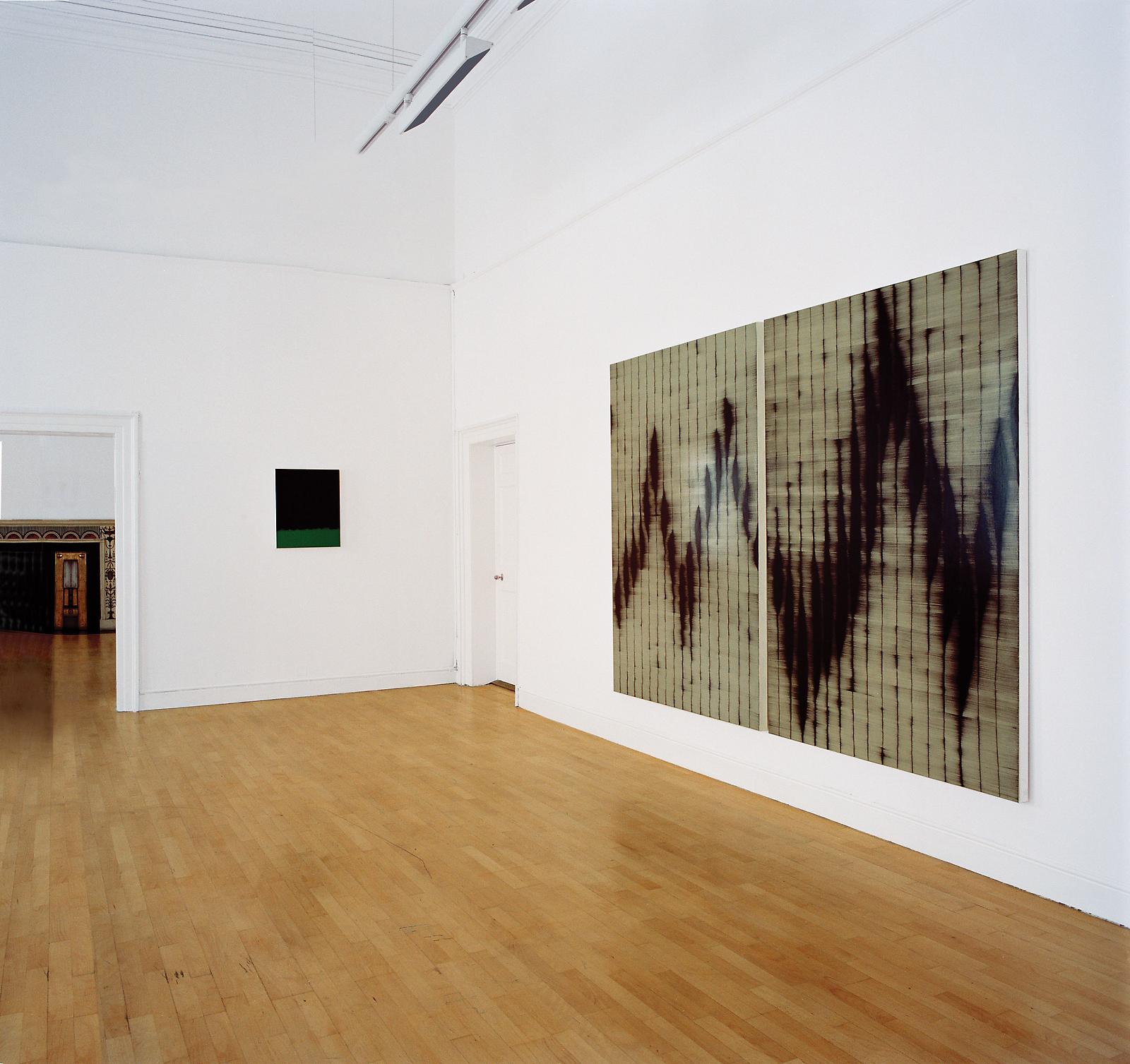 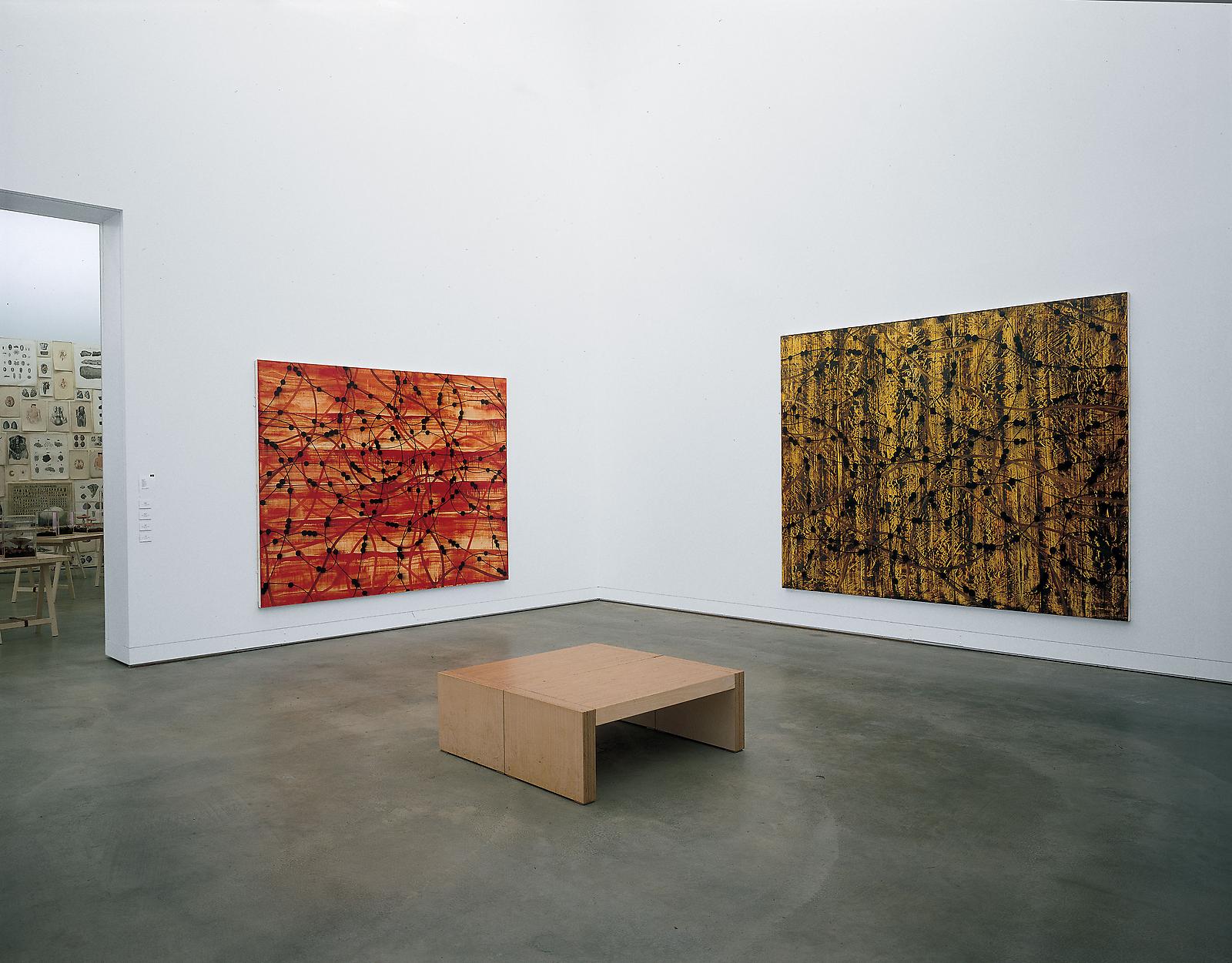 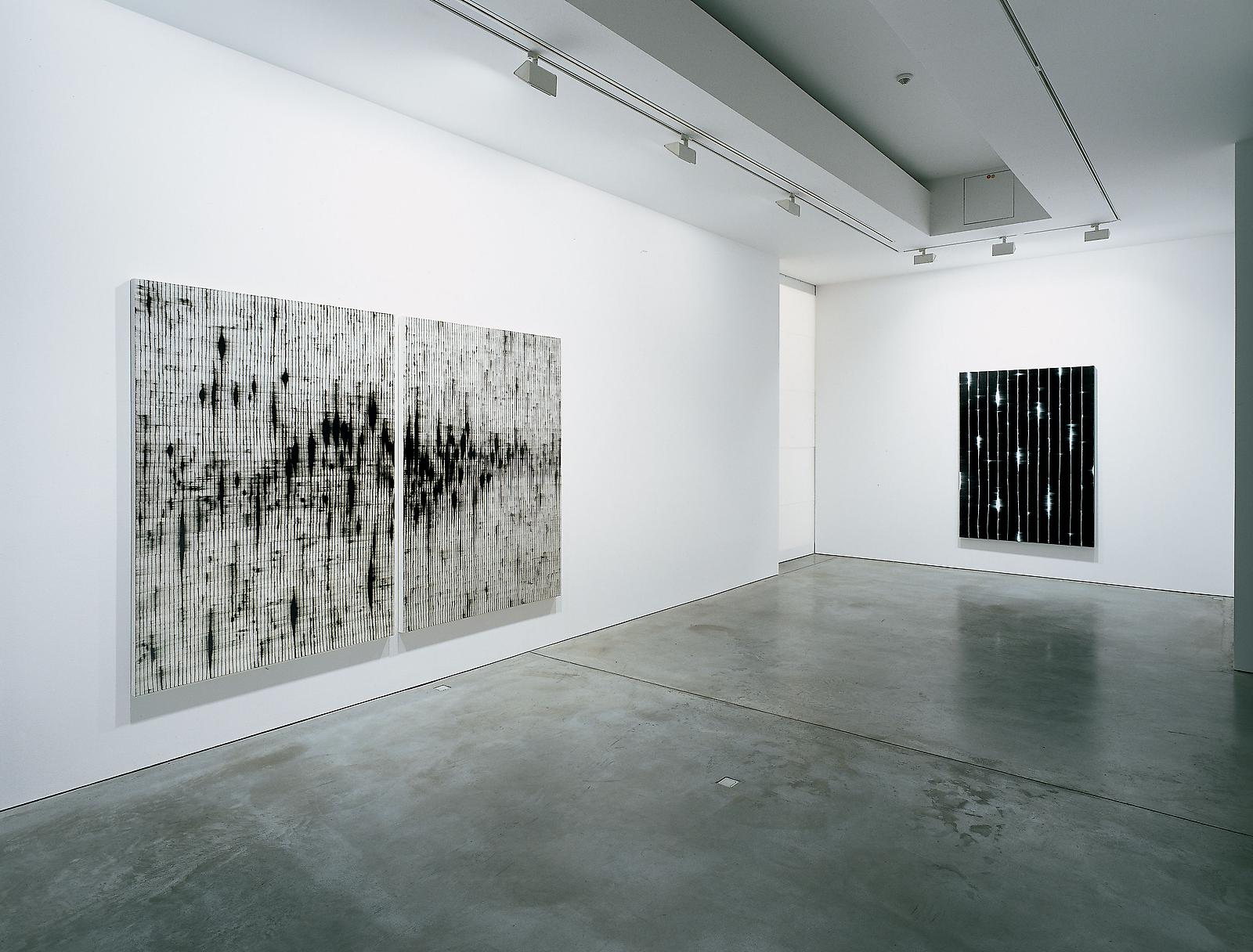 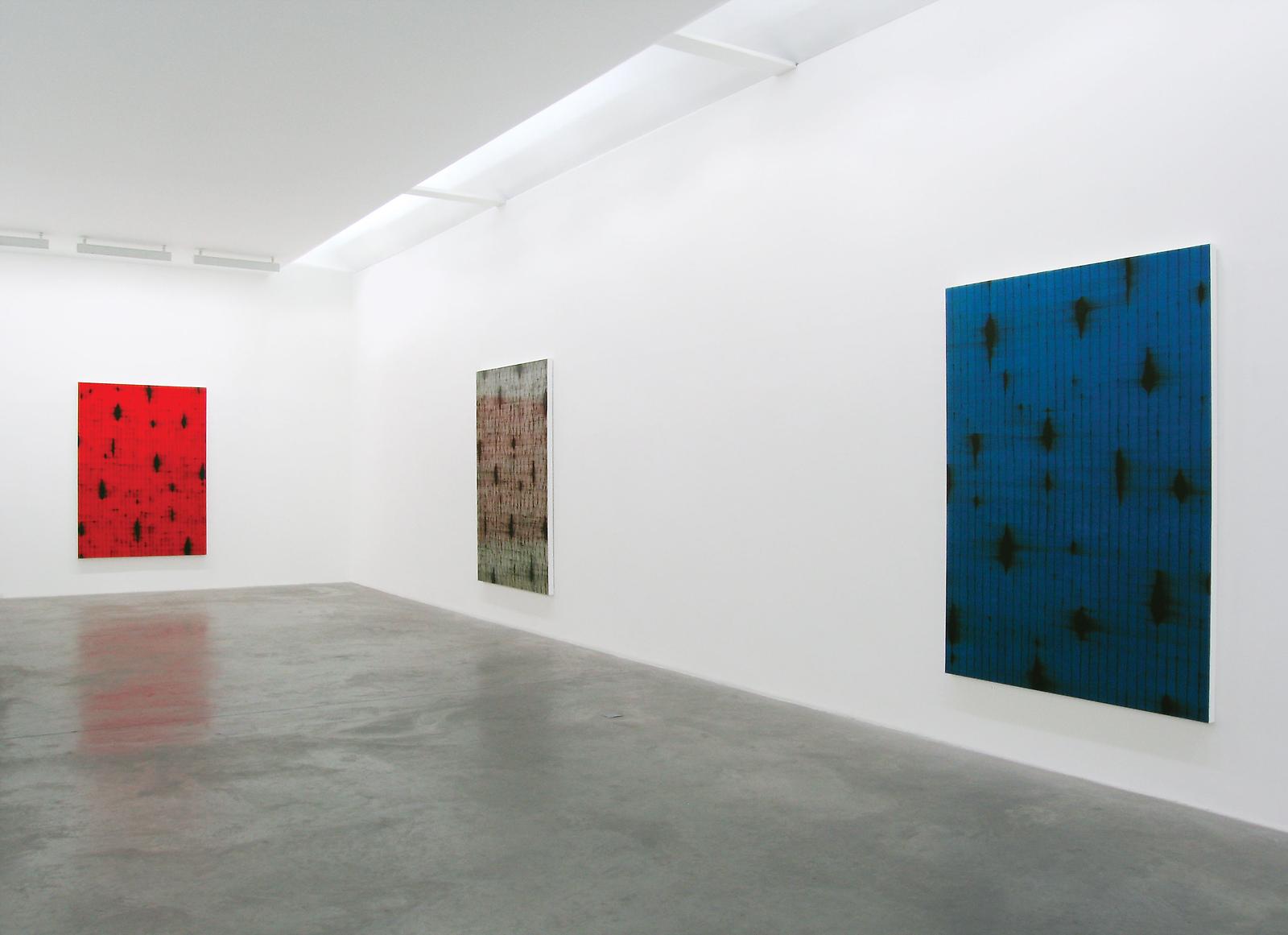 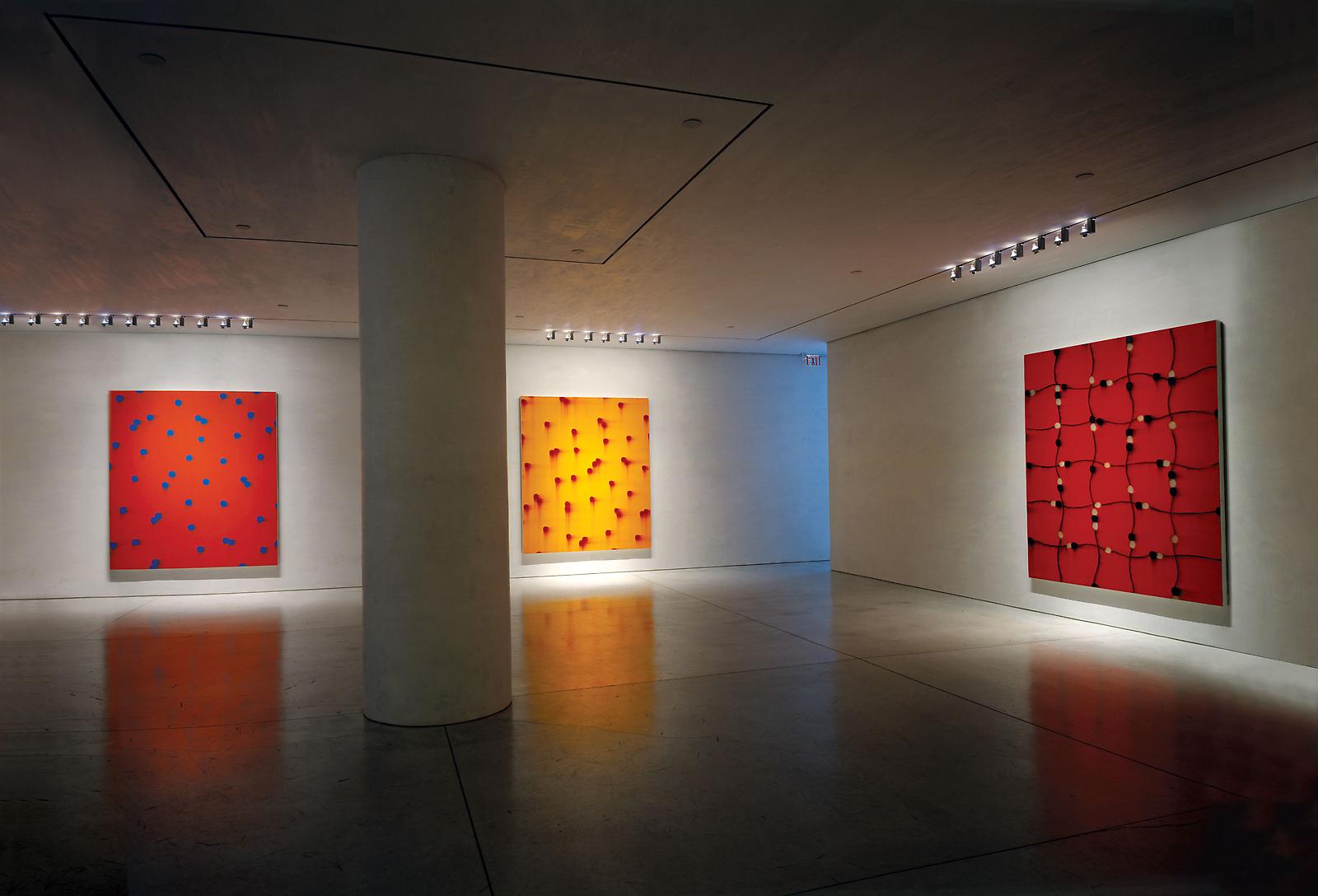 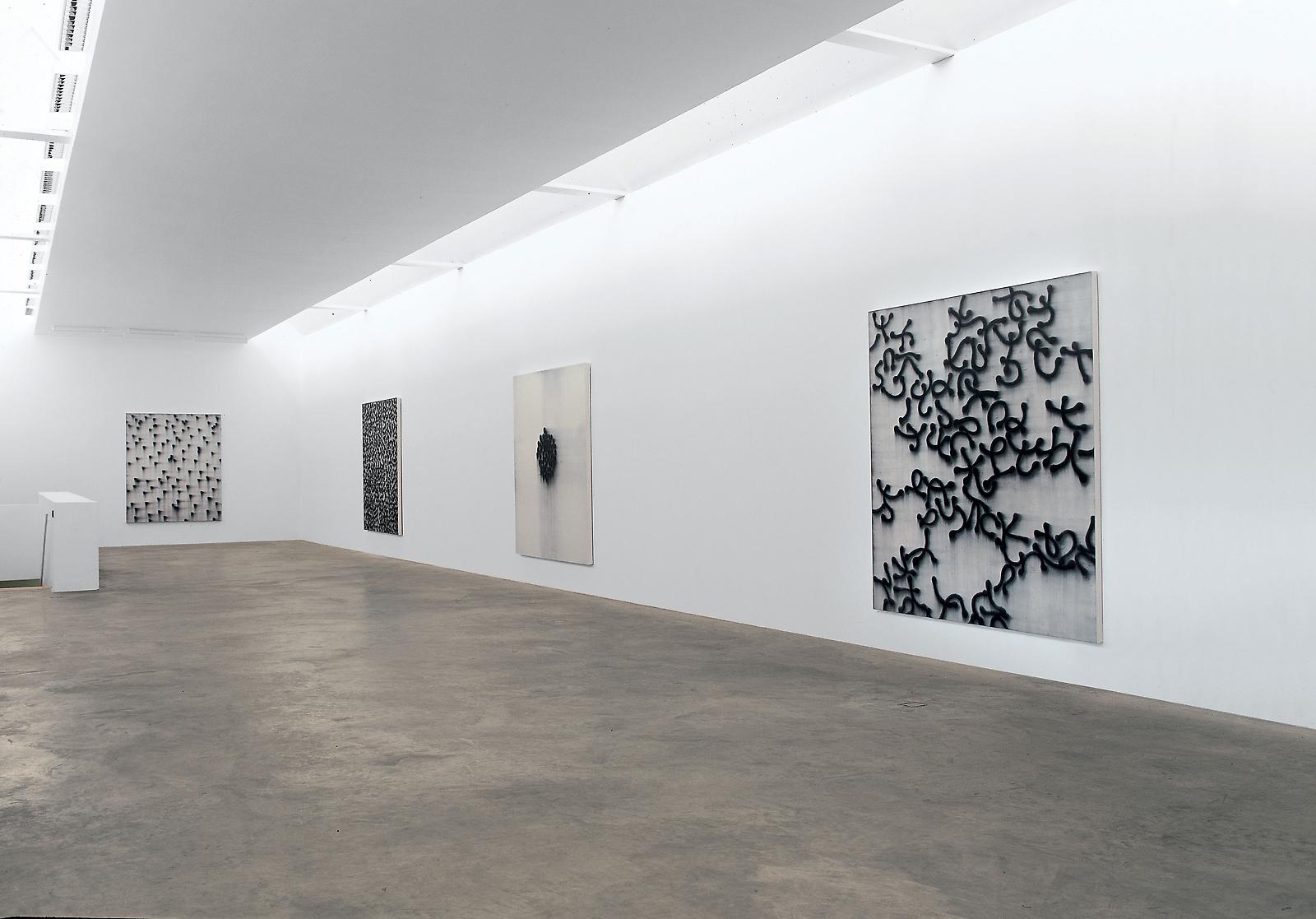 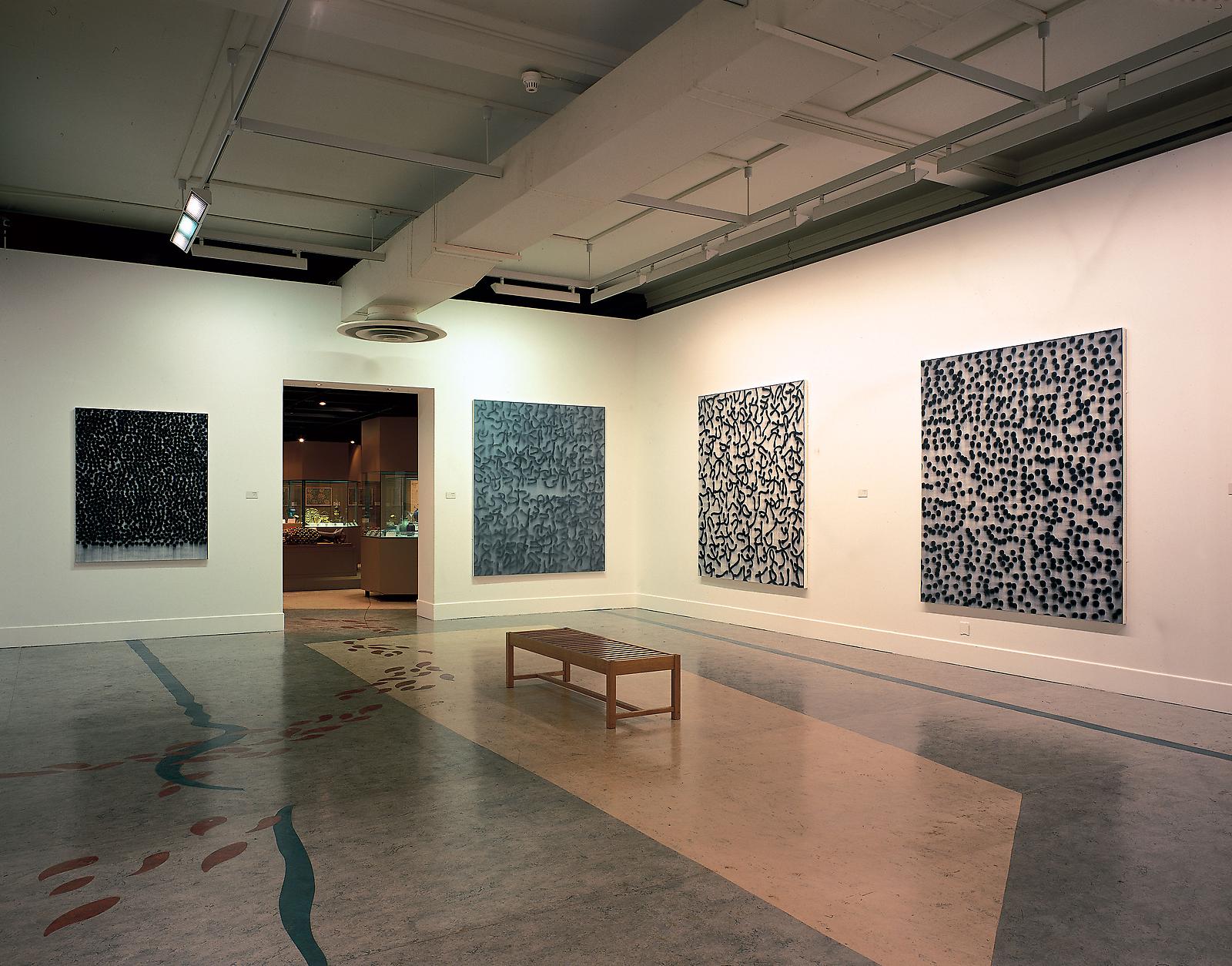 b. 1962, Newtownards, Northern Ireland.
Over the past thirty years, Mark Francis has made paintings of singular optical intensity — powerful, apparently abstract combinations of concentrated patterning and stark colour contrasts that are in fact principally based on what the unaided human eye lacks the power to see. His work draws significantly on discoveries about the form and substance of reality that result from technologically enhanced vision. An enduring fascination, for instance, has been the visual worlds made accessible by the matter-penetrating gaze of electron microscopes: the dark, scattered, interconnecting orbs or the variously taut and slack lines of his paintings have drawn their strange forms from imagery of the miniature universe, the realm of molecular structure and cellular association out of which all life is assembled. More recently, too, Francis’ art has looked outwards, taking as points of pictorial reference the graphic interpretations of data received by radio telescopes as part of astronomers’ efforts to chart distant zones of the cosmos. Such scientific advances in the power of perception have for Francis come to present vital challenges — and opportunities — for the practice of painting. If the grid structures of his paintings suggest continuing alertness to the legacy of artistic modernism — and so to its influential arguments about the specific, limited capacities of painting as a medium — this is a burden of history always understood in relation to the revelatory insights generated by contemporary science.
Recent solo exhibitions include: White Light, Kerlin Gallery, (2019); There is Geometry in the Humming of the Strings …, Peninsula Arts Gallery, Plymouth University, UK, (2016); Arena, Abbot Hall Gallery, UK (2010) and Pulse, Dublin City Gallery, The Hugh Lane, Dublin, (2008). Recent group exhibitions include: Deep One Perfect Morning, Kerlin Gallery, Dublin, (2014); Strukturen Projekt, Kunsthalle Wilhelmshaven, Germany, (2014): Lets Party For A Piece Of Art, Pinakothek der Moderne, Munich, Germany, (2011); Creating the New Century – Contemporary Art from the Dicke Collection, Fort Collins Museum of Contemporary Art (FCMOCA), Fort Collins, CO, USA, (2011); LITOS GRAFERA, Kunst Centret Silkeborg Bad, Silkeborg, Denmark, (2011); Cream – Kiasma, Museum of Contemporary Art, Helsinki, Finland, (2010); Summer 2010, Kerlin Gallery, Dublin, (2010); Kunstmuseum St. Gallen, St. Gallen, Switzerland, (2010); What lies beneath the surface, Irish Museum of Modern Art, Dublin,, (2008); Die Kunst zu sammeln, Museum Kunst Palast, Düsseldorf, Germany, (2007); ART FUTURES, Bloomberg SPACE, London, (2005); Irish Art Now: From the Poetic to the Political, Chicago Cultural Center, Chicago, USA; The McMullen Museum of Art, Boston College, MA, USA; Art Gallery of Newfoundland and Labrador, Canada and Ormeau Baths Gallery, Belfast, and Northern Ireland; PS1, New York, NY, USA; Albright-Knox Art Gallery, Buffalo, NY, (All 2000).
Francis' work is represented in the collections of The Irish Museum of Modern Art, Dublin; TATE, London; Victoria & Albert Museum, London; Metropolitan Museum of Art, New York; de Young Memorial Museum, San Francisco; Museum of Modern Art, Miami; The Saint Louis Art Museum, St. Louis, Missouri and Dublin City Gallery The Hugh Lane and in private and corporate collections worldwide.
Artist's website
Download PDF

Mark Francis, There is Geometry…

To celebrate its 150th anniversary, the London Mathematical Society has invited Mark Francis and George L-Legendre to create new work drawing on mathematical ideas. The resulting exhibition at Plymouth University is titled 'There is Geometry in the Humming of the Strings, There is Music in the Spacing of the Spheres': Conversations Across Art and Mathematics.

British and German Painting in Dialogue

Structures/Strukturen is a British/German collaborative exhibition of contemporary painters. It brings together the work of eight established artists, recognised internationally in their field, who explore the interaction of colour, form and structure.

From the Studio Of... Mark Francis

‘UNCERTAINTY’ is a nutshell description of the world we live in today, whether referring to the environmental, socioeconomic or political landscapes. It is also a term that fires the imagination of Irish-born artist Mark Francis, who I met at his studio in south London. From the microscopic structure of a fungus, to the infinite space of the universe, Francis creates his work through an impulsive, evolutionary process, the outputs of which question whether order and chaos can happily coexist.

Then, not far from the bottom, he breaks that pattern by simplifying the mark-making, and changing the overall colour – a rich undersea blue breaks off all of a sudden, and yields space to a brilliant sunburst. It feels like that moment of change in a symphony, when violent agitation is transformed into something else. We are projected elsewhere.

With  only  a  cursory  glance,  Mark  Francis’s  paintings  look  abstract,  built  through  sign  and  color.  After  closer observation,  though,  the  origins  of  the  work  by  this  artist  from  Northern  Ireland,  who  for  years  was  a  leading  YBA  figure, are  revealed  as  completely  different  and  in  many  ways  unexpected.  His  art  is  directly  inspired  by  the  worlds  of  science, medicine,  botany,  and  the  natural  sciences.  The  images  are  taken  from  microscopes;;  they  are  enlargements  of  what lies  around  us  and  for  the  most  part  goes  unobserved.  This  exhibition  contains  roughly  twenty  works,  on  paper  and  on canvas,  in  which  clearly  delineated  black  marks  are  positioned  against  soft,  blurred  backgrounds  built  from  skillful glazes.  The  depth  of  the  exquisitely  pictorial  constructions  seemingly  refers  to  additional  dimensions,  a  formal  corollary to  Francis’s  conceptual  investigations.  These  are  microcosms  in  a  profound  and  dense  dialogue  with  the  surrounding macrocosm,  and  they  create  sometimes-­ambiguous  relationships  between  vision  and  representation.

 Translated  from  Italian  by  Marguerite  Shore.

Francis’  paintings  work  best  when  they  do  not  so  readily  give themselves  up  to  simple  identification;;  when  the  elements  of the  pictures  avoid  immediate  recognition  and  there  is  a  sense of  a  tension  between  abstraction  and  figuration.